Big news for the bouldering world! 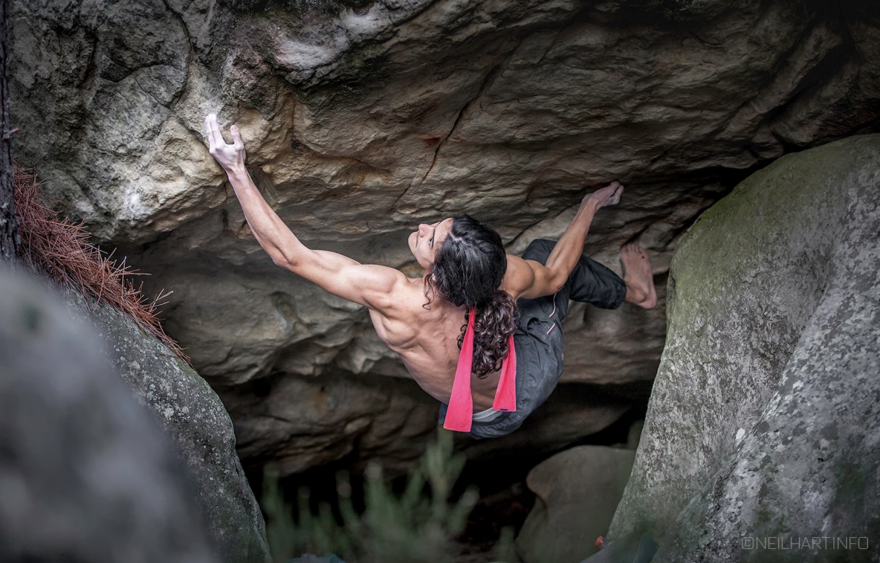 Charles Albert bouldering in Fontainebleau (not on his new V17). Photo:Neil Hart.

After years of attempts, Nalle Hukkataival made history in 2016 by climbing Burden of Dreams in Finland. He graded the problem V17 (9A), making it the first climb of this difficulty in the world. Meanwhile, Charles Albert, of Fontainebleau, France, was putting up some wildly difficult blocs in his home area… and all barefoot.

Now, Albert has made the first ascent of the world’s second V17, No Kpote Only in Rocher Brûlé, Fontainebleau, France, sending it in only 20 sessions, and, of course, doing it without shoes.

Albert told the French website Fanatic Climbing that No Kpote Only, “starts in the 8B [V13] located on the left-hand side of the boulder, climbing a crack. You have 3 traverse moves around 8A+ [V12] followed 2 extremely hard moves before reaching the undercling that is the stand start of “Gaia”  7C [V10].”

He went on, “You need to hold a crimp left hand going to a good right foot hold , before a hand-foot match and a dyno in a far two-finger pocket again with the right hand. Then you need to cross in the underclings of the stand start of “Gaia” and finish on it. Except for the 2 extreme moves, the holds have been hammered but it’s not too uncomfortable to climb.”

The 20-year-old Albert’s barefoot style has made him a novelty in the climbing world, not least because of how hard he sends. His ticklist includes impressive problems like Monkey Wedding (V15) in Rocklands, Le Pied à Coulisse (V16) in Fontainebleau, and the first ascents of La Revolutionnaire (V15), La Revolutionnaire Extension (V16) and Hypothèse assis (V16), all in Fontainebleau.

For footage of Albert projecting No Kpote Only, jump to 7:10 in the video below: