Bystander Intervention Can Put the Kibosh on Sexual Harassment
News +

Bystander Intervention Can Put the Kibosh on Sexual Harassment

When, whether and how to intervene. 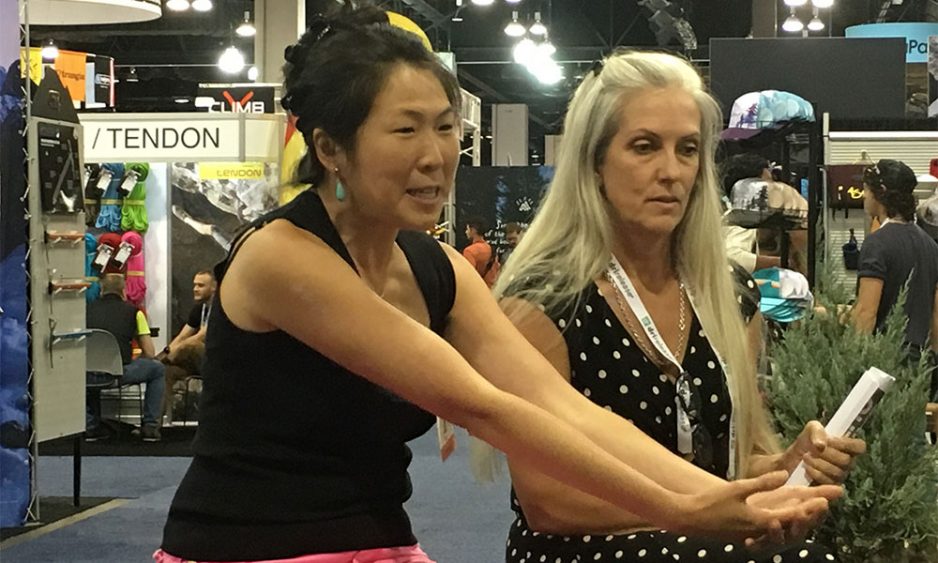 A climber—more likely in a gym than in other climbing locations, according to recent research—sees or senses something. What was that? Did a nearby climber grimace at what a researcher calls an “unwanted shoulder massage”?

Some of us have at times wondered, Should I do something?—or, if not, may someday find ourselves in a similar situation.

The issue of bystander intervention came up at two presentations, one via a conference call on July 5 and the second in a workshop July 23 at the Outdoor Retailer industry trade show, organized by the researchers behind the #SafeOutside initiative. #SafeOutside began with a survey, linked to by magazine websites (including this one), the American Alpine Club and other clubs, the Access Fund, gyms and other organizations throughout the outdoor industry.

A dozen magazines, with Alpinist taking the lead with a print feature and organizational support, signed on to release news and results in concert today.

The initiative (see news story and results here) comes from Charlie Lieu, an MIT computational biologist and data scientist and a visiting researcher at the Broad Institute of MIT and Harvard, and Callie Rennison, PhD, a professor in criminology in the School of Public Affairs, University of Colorado Denver. Both women are climbers. Rennison said they sought to gain an idea of whether sexual harassment and assault happen in the climbing world “because it’s the right thing to do and a basis for education.”

Among 5311 survey respondents, 42 percent of U.S. women and 9 percent of American men answered “yes” to this question: “Have you experienced SHSA [sexual harassment, sexual assault] while engaged in a climbing activity?”

A topic at both talks was the role of bystander intervention in preventing or minimizing unwelcome contact.

Speaking at the OR workshop, Rennison said, “People need to understand that touching [a climber’s] butt to spot, putting hands around someone’s waist, shoulder massaging” may be unwelcome and harassing. “It doesn’t have to be illegal to be bad.”

Lieu said, “If you see people looking uncomfortable, being touched in ways they shouldn’t, you have the [power] to intervene.”

Intervention tactics are often, as included in the pair’s earlier PowerPoint presentation to accompany the conference call, described as the four D’s: direct, distract, delegate, delay.

Direction can mean showing discomfort or frustration at, as opposed to tolerating, inappropriate joking. Distraction can mean diverting or joining a conversation, stepping (possibly feigning obliviousness) between a perpetrator and victim, or steering the victim away.

Delegating in climbing contexts may mean alerting a gym manager or other authority to become involved. “You can delegate if you don’t feel you have the social standing,” Rennison said at the OR show talk, while Lieu, laughingly indicating the 6-foot-7 war veteran and outdoor leader Stacy Bare, who stood nearby in the aisles, said a small-statured woman “can delegate to people with more power like Stacy.”

“You can use my height to your advantage!” Bare called back humorously.

Delaying can mean talking to the victim after an incident to ask, “Are you OK? Can I help?” Another option is reporting incidents.

In correspondence with Rock and Ice after the presentations, Lieu wrote in an email: “Our voice has power—to not only intervene when sexual harassment and assault are happening, but also to promote consent, to teach about respect boundaries, to end victim blaming.”

Lieu said at the OR show, “I was shocked at how many people came up and said, ‘You know what happened to me…?’ Every time I go out in a climbing scenario, one or two people come up. Yesterday two people came up in a parking lot. I’ve tried to be pretty under the radar. I’ve tried not to be recognized.” Yet she estimated that she’d had about a dozen women approach her, and another six or eight contact her by phone or social media independently of the survey. “[That] tells me how impactful it must be.”

The researchers’ materials report such ill effects on targets as guilt, a sense of isolation, or trauma, even to the point that suicide could be a risk; avoiding certain gyms or areas or changing schedules to avoid perpetrators; seeking only female partners or mentors; and experiencing hostility or “retaliatory isolation” in person or on social forums after speaking out.

A tool kit and educational materials are available today. See the #SafeOutside Toolkit (containing policy guidance, templates and other materials to help people and organizations address issues of sexual harassment and assault) here.

Still, tool kits will not prevent unwanted encounters. Understanding and engagement do, Lieu said. “There are people who don’t get that this is not OK.”

Counting on her fingers, Rennison cited concrete potential consequences of such behaviors, such as: “You’re off the board, you’re not a member of this gym.”

For information, preparation and suggestions for what to do or say in any possible harassment situation, see this tip sheet from the National Sexual Violence Resource Center.

The #SafeOutside tool kit link gives many resources. One is a video with clear legal definitions of SHSA.  Another is the National Sexual Violence Resource Center, which offers information and assistance.