The farmers on whose land most of the world-class boulders lie have lost nearly all of their income. If they are forced to sell their land, bouldering in Rocklands may cease to exist as we know it today. 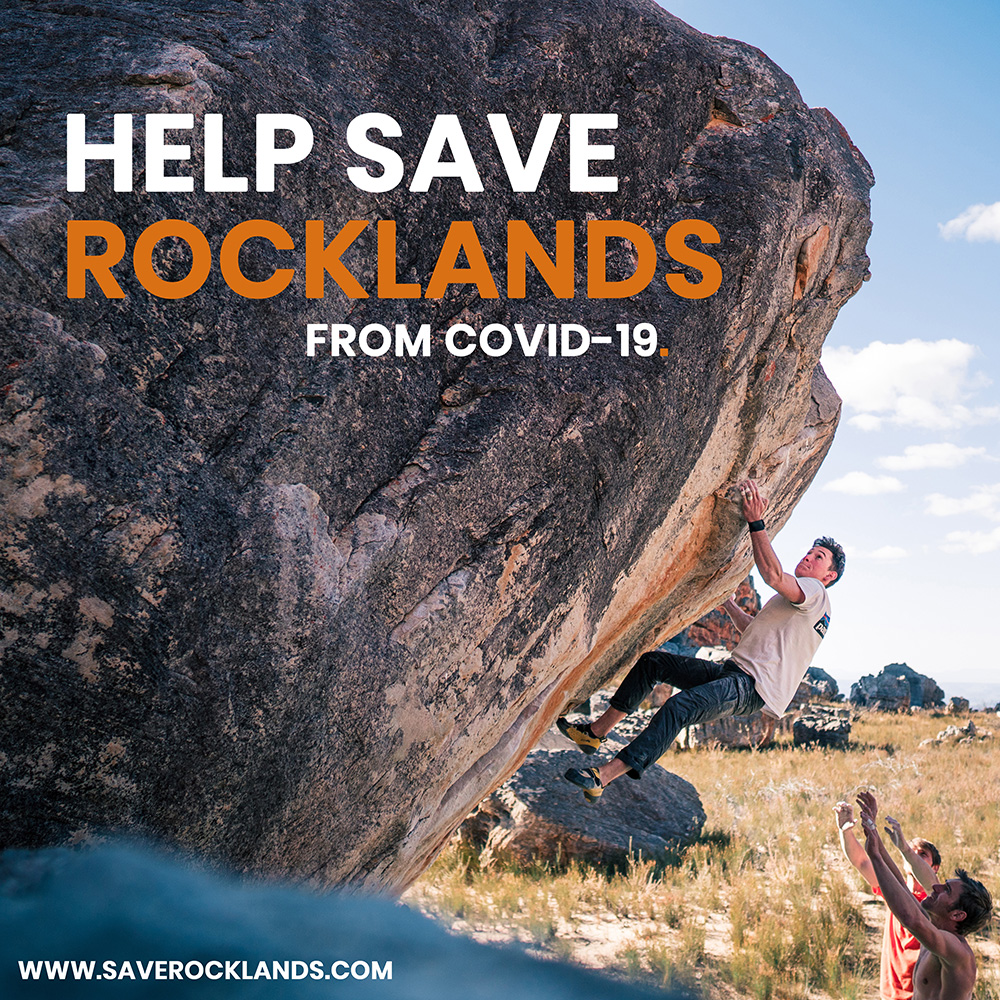 Thys Kruger, owner of De Pakhuys, a guesthouse and campsite in Rocklands, South Africa, says he has always marveled at “the symbiotic relationship between climbers and landowners in Rocklands.” Nearly 4,000 visiting climbers each year patronize his establishment as well as those of several other farmers in the vicinity, and in turn Kruger and the other farmers’ happily open up their lands—which contain the vast majority of Rocklands’ world class boulders—to the eager hordes. “It all comes down to the spirit which prevails in Rocklands,” Kruger says. “Rocklands has soul.”

Now, that symbiosis Kruger speaks of is being tested. When COVID-19 effectively brought global travel to a halt, climbers began cancelling their reservations at the local guesthouses. And without the income from climbers, the farmers have their backs against the wall.

David Naude, a South African climber who grew up climbing in Rocklands, recently launched a new initiative, Save Rocklands, with fellow South African climber Tony Flynn. Naude explains the situation in Rocklands as follows: “The farmers used to rely on agricultural income, but then as Rocklands starting developing more as a bouldering area, they started relying more on tourism income. Now, like 85% of the income in the area is generated by tourism. So since no one can come at the moment, they don’t have that income.”

[Also Read Op-Ed: Triage in the Time of Coronavirus – A Climbing Guide’s Perspective]

Without that annual income, five of the farmers including Kruger, are at risk of having to sell their land, or at the very least access to it, to make ends meet. Many local workers have already been let go as business has fizzled. All of this could in turn have a direct effect on access to the boulders on the farmers’ land, jeopardizing the entire climbing ecosystem that has developed in the area.

It is against this backdrop that Naude and Flynn decided to launch Save Rocklands. They were there as quarantines began going into effect and climbers started cancelling their upcoming reservations left and right. “So we decided to help them out,” Naude says of the farmers.

Save Rocklands’ is a fundraising initiative to support the local businesses and workers in the area financially, until tourism picks back up. The hope is that that will happen within about four months, but it’s anyone’s guess.

Within a week of finalizing their idea, Naude and Flynn launched a website and the campaign slowly gained some traction. Thus far they have raised $2,108—about 39,000 Rand (R), in South Africa’s currency. It is a modest sum, and they have a long way to go to reach the $90,000—over R 1,600,000—they project is needed to support the local businesses for the next four months, but every little bit is making a difference.

Naude says, “One farmer we talked to said, ‘If you can give me 10 Rand, I’d be grateful.” That isn’t even 50 cents. So everything helps.”

Flynn and Naude hope to have R 10,000 for the farmers by the end of this month, and the plan, agreed upon by all the beneficiaries, is for the money to be distributed to the smallest farms in greatest need first.

Thys Kruger has nothing but gratitude for those who are stepping up to help him and his neighbors. “Rocklands is about caring and giving.  Rocklands is about camaraderie and kindness. Rocklands is the essence of humankind. This is so clearly echoed in these two young gentlemen unconditionally reaching out to help.  We gracefully and thankfully accept, we know this has no strings attached, no hidden agendas—in Rocklands we are family.”

Support the Rocklands Community at Save Rocklands