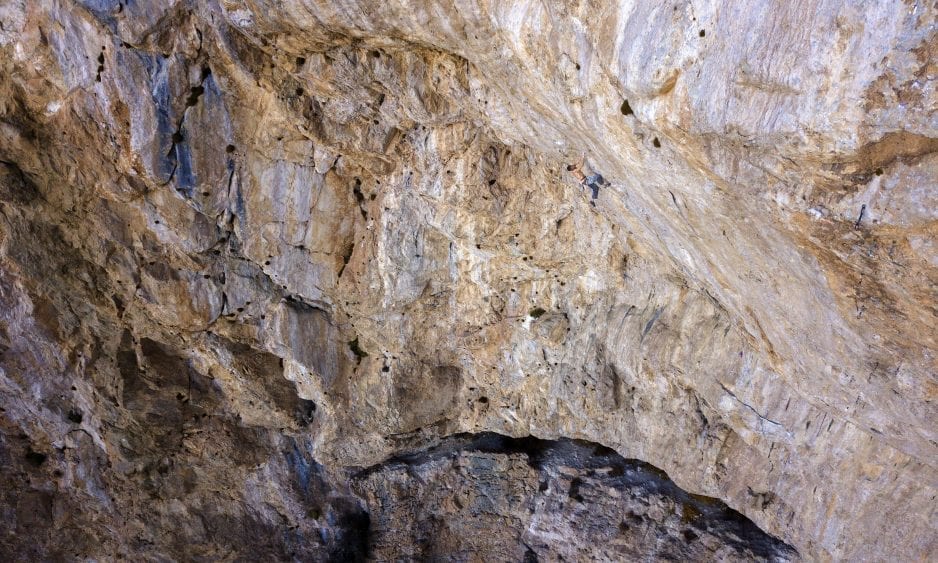 More than 20 years ago Bill Ramsey saw a picture of his friend Randy Leavitt on a fabulously steep route in the high desert of the Mohave Preserve, and knew he had to climb it. Someday, he thought.

On June 4, he climbed Jumbo Pumping Hate, a Randy Leavitt 5.14a at Clark Mountain, California, despite a chronic hip problem aggravated by the hour-long approach.

“Randy’s Jumbo Pumping Hate is so damn classic that it has always been on my bucket list,” Ramsey, who lives in Las Vegas, says in an email. “And, you know, the proverbial bucket is always looming closer.”

For the background on Ramsey’s send, let’s start with some numbers. Ramsey has done too many 5.13s to have kept track, but the total is well over 200—80 at Rifle alone, and more than that in Red Rocks and at the Red River Gorge. He does know his 5.14 tick list: 26 of them, all but one done since he turned 40. Six are 5.14b’s, and two of those (Reverse Polarity and Golden) he did in his 50s. He did Jumbo Pumping Hate 11 days after he turned 59.

The route sits next door to the storied Jumbo Love, envisioned and tried by Leavitt, who in 2007 graciously handed it over to the next gen. Chris Lindner, Ethan Pringle and Chris Sharma projected it, with Sharma succeeding in September 2008. Rated 5.15b,  Jumbo Love may yet be the hardest route in the United States, though Tommy Caldwell’s Flex Luther remains unrepeated. The first repeat of Jumbo Love was by Ethan Pringle in 2015, and Jonathan Siegrist did the third ascent in 2018.

“I found JPH to be really hard,” Ramsey says in the email, “especially given its location. Having hip surgery Monday in part because of that route, lol.”

As of Monday, June 17, Ramsey, a philosophy professor at the University of Nevada, Las Vegas, was in the hospital for a femoral-neck osteoplasty, or hip surgery to shave off bone spurs and repair the torn labrum.

Still, one thing led to another.

“My friend Nate Rasnick was working it, so he talked me into joining him and I’ve been throwing myself at it for the past couple of seasons. It has a huge dyno where a big hold broke off several years ago making it harder; I was getting shut down there, and even when I happened to stick the dyno, I would still fall on the second crux a little higher. So despite feeling pretty strong, since the temps were warming up and my hip was feeling worse, I had very little expectation of succeeding.

“But sometimes everything falls into place and you completely surprise yourself.  I think being positive is less important than just trying really, really hard.”

Asked what he will do to celebrate turning 60, he responds humorously, “After I recover from surgery, my plan is to ease into 60 about the same way as everything else—with not much actual ease.”

Randy Leavitt tells Rock and Ice: “I was very impressed with Bill’s ascent of JPH. I know he really struggled with his hip, but apparently not his age! I’m always pleased when people choose my routes as their projects—even more so this time. Congratulations, Bill.”

The well-respected Ramsey has been around and on scene for a long time and at many areas. Among his best routes are: Omaha Beach, Transworld Depravity, Black Gold, White Man’s Shuffle and Golden Boy at the Red, and The first free ascent of Monkey Face, called Monkey Space, with Chris Jones in 1979.

At the news of JPH, other climbers went, well, nuts, posting many and varied congrats:

Austin Bullard: “You are an insane person. Congratulations. You’ve always been an inspiration.”

Craig Smith (UK): “Boom. Someone just cemented their place in the Players Club.”

Jany Mitges: “Huge congrats, Bill. … If the dictionary were to show a picture of what badass looks like, it would be a picture of you.”

Don’t let your mind get old because your body will follow. Congratulations to 59 year old Bill Ramsey for climbing Jumbo Pumping Hate (5.14a) at Clark Mountain in California. This was one of the most special first ascents I have done and it is rewarding to see climbers embrace it as their project. I originally did JPH as 4 pitches because of the zig zag it has at the start of pitch 3. Nowadays people just climb the first two as one (no hands rest makes the link of the first 2 not so bad AND your belayer never has to leave the ground). Unfortunately no one goes beyond that point to climb the burly 13c to the classic 12a finish. This 1995 photo by Jorge Visser is of me on the business #maximropes #lasportiva

Inside the Mind of Ethan Pringle: Climbing Jumbo Love