Bats in the Cracks - Rock and Ice
News +

Bats in the Cracks

A friend told me the other day about climbing El Cap at sunset. He was belaying his partner when suddenly, from the one inch crack they were ascending, hundreds of bats began to emerge and spread their wings against the darkening sky. They poured out in numbers that stunned, that made you wonder just how deep into the heart of El Cap that crack went. He and his partner stopped climbing, stunned into stillness for unknown minutes. “It was the kind of thing you would never forget,” he said.

Hearing it, I was blown away, imagining those warm bodies flowing around me, appearing as if from nowhere. Had he told the same story to Robert Schorr, a zoologist working for the Colorado Natural Heritage Program, he might have fainted with delight. “Climbers have access to bats’ natural histories on a level that bat biologists, the people who actually study them, can only dream of,” he told me in a conversation. Now, Schorr is working to leverage that access for a better understanding of how and where bats roost. The bats need the help.

North American bats have been hit hard in the last decade by a disease called White Nose Syndrome (WNS). First spotted in 2006, WNS has caused the deaths of more than six million bats in 33 states, with a 90-100% mortality rate. It’s caused by the fungus Pseudogymnoascus destructans, which infects the bare skin of hibernating bats and forces them to become active mid-winter, with most of the afflicted freezing or starving to death. Since bats only have one to three babies (called pups) per year, the remaining populations will be slow to recover and may suffer from a genetic bottleneck making them less adaptable.

Scientists are working hard to prevent the spread of WNS while trying to understand the disease and potentially develop a cure for it. The thing is, being nocturnal, quiet and hidden when roosting, bats can be pretty hard to study—especially bats that aren’t concentrated in large populations in human-accessible caves. In fact, nearly nothing is known about bats that roost in cracks and crevices all over the country. That’s where climbers come in.

The first step is easy: If you see a bat while climbing, report it! Send an email to climbersforbats@colostate.edu with the route and route location,the time of day, the date, and, if you can, how many bats you saw. The data collection is meant to be as effortless as possible, Schorr says, because “this isn’t a job. I don’t want it to detract at all from a climber’s experience.” You can also report your observation on iNaturalist, a free app where geo-tagged observations and photos of plants, animals and fungi are identified by a community of users and stored on an online, open-access database. You can upload any reports either online or in-app by finding and joining the “Climbers for Bat Conservation” project.

The collaboration may seem simple, but it’s a partnership that has the chance to revolutionize bat biology. This unprecedented ability to encounter bats where they’re naturally roosting in cracks and crevices opens up a new frontier of learning for a poorly understood group of animals. “It’s important to be exploring these unknown taxa,” Schorr says “they’re slipping through the cracks.”

If they manage to slip away, we might be in trouble, too. Bats can consume three quarters of their body weight in a single evening, making them powerful natural pest-controls. Each year, they provide $23 billion worth of insect control for farmers in the U.S. (Boyles 2011), as well as potentially minimizing insect-caused disease outbreaks. Those bat species less keen on insects are key pollinators for bananas, mangoes and agave, alongside 1,000 other plant species. Not only that, but their physiology has been studied by engineers, and scientests are testing the anti-coagulant that vampire bats produce as a medicine for stroke patients. We’re only just appreciating how important bats are to the ecosystem—and to us.

[Also Read The Best Crag Dogs of All Time]

But it’s not all about the future of agriculture and the potential to save a species. It’s also about the joy of exploration, learning and collaboration. For Schorr, “Realizing that I could find bats up there made me want to get on a wall the next day.” And he did. After hearing with excitement about the route Chiroptophobia, a a 5.10+ in Colorado named for its well-known presence of bats, Schorr hired a guide and learned to jug just to get up there and see for himself. Now he’s shopping for climbing shoes and getting to a gym to explore the subtleties of climbing movement.

He has equally enjoyed, and been humbled by, the enthusiasm from the climbing world. Climbers for Bat Conservation has hosted a few “bat outings,” where they bring climbers out on bat surveys in order to “share the wonder of bats.” Schorr has loved seeing folks more excited about bats than the biologists themselves, and is continually blown away by climbers’ athleticism and dedication. While the response has been positive and supportive, Climbers and Bats for Conservation has been growing slowly, focusing first on building a strong relationship with the climbing community based on trust and mutual respect. But Schorr is excited about getting more people involved. “We can all do conservation biology,” he says, and that’s the beauty of it.

Climbing is a way to expand the explorable world from just the horizontal into the vertical realm. Climbers for Bat Conservation now gives us reason to explore not just the surface of the cliffs, but the cracks splitting the rock and the denizens within. Reporting our observations adds another layer to the adventure, further engaging us in a moment we already seek to be present in. Moreover, it’s something that climbers, and no one else, can offer. With little effort required, it seems a worthwhile thing to do in service to the natural world we so love and rely on.

If you have any questions, contact Birch Malotky (author) or Robert Schorr (climbersforbats@colostate.edu) 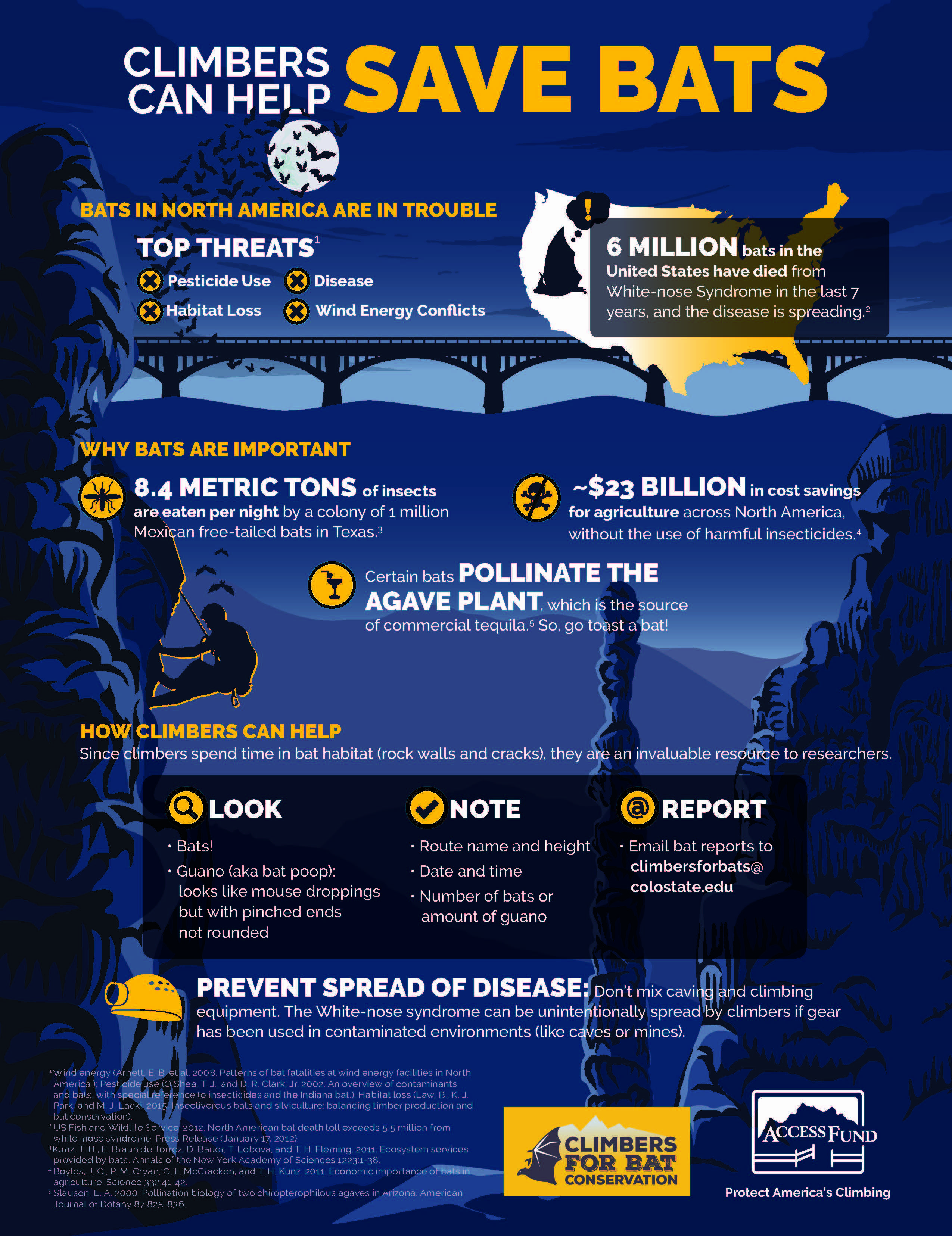 Jim Reynolds’ Fitz Roy Free Solo: Putting it in Perspective with the Pros