The Austrian climber has conquered her first 9a (5.14d), Speed Intégrale, in Voralpsee, Switzerland. 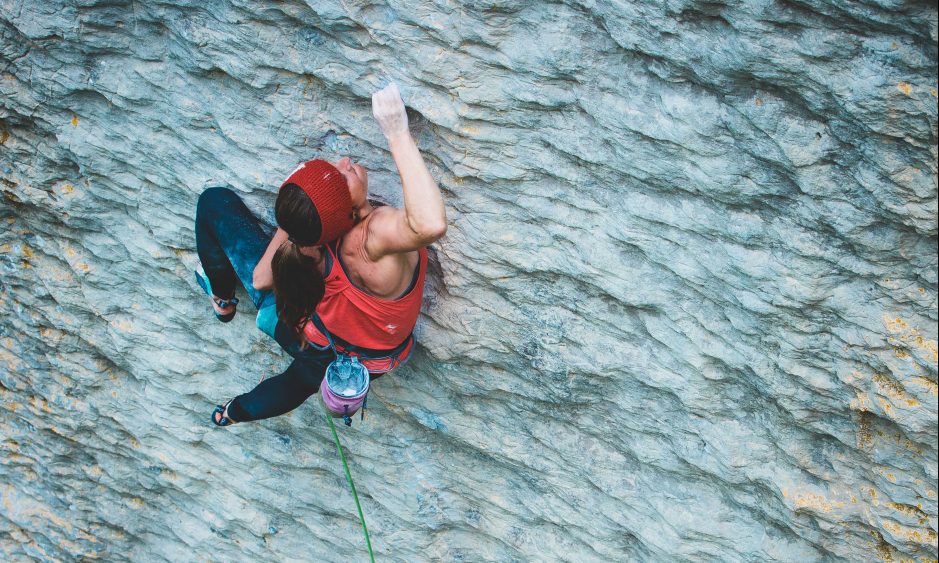 Straight off the graveyard shift at the hospital, and at the end of a long, wet day at the crag, the Austrian climber Barbara “Babsi” Zangerl blasted her way up Speed Intégrale (9a/5.14d) in Voralpsee, Switzerland.

Speed Intégrale is a crimpy 9a extension of Beat Kammerlander’s Speed (8c+), first freed by Cédric Lachat in 2010. When she snagged the redpoint, Zangerl had never even climbed Kammerlander’s route, and instead had been training exclusively for the extension, Intégrale, working the route for around 13 days before her send, beginning in late March. “My goal was Speed Intégrale from the beginning on,” Zangerl said. “I had never sent Speed before. I climbed a lot in Voralpsee before, but just for training, repeating the easier routes there to get fit for alpine climbing in the Alps. This year I wanted to focus on Intégrale because I thought it would be cool to invest more time in such a mega sport climbing route.”

Zangerl is widely recognized as one of the most versatile climbers, male or female, on the rock right now. She was well-known as one of the world’s top female boulderers as far back as ten years ago, notably famous for her 2008 ascent of Pura Vida (8B/V13) in Magic Wood, Switzerland, marking her as the first woman to boulder that grade. Unfortunately, Zangerl suffered a herniated vertebral disc in her back the next year, which led her to take a step back from bouldering for a period and become more invested in other forms of climbing.

Not easily daunted by her injury, Zangerl quickly transitioned into an all-around, nails-hard climber, ticking off a string of sport routes ranging from 8b+ (5.14a) to 8c+ (5.14c) throughout the last decade. In 2014 she made the first female ascent of Prinzip Hoffnung (E9/10 / 8b+), a Beat Kammerlander trad testpiece, and in 2017 made the first ascent of Gondo Crack (8c/5.14b R), first as a sport route and then on gear, with her longtime climbing partner Jacopo Larcher. Zangerl has also battled up numerous big walls in the Alps and Yosemite, snagging the first female free ascent of three big El Cap routes: El Nino, Zodiac and Magic Mushroom (the latter consisting of thirty pitches up to 5.14d).

The day she sent Intégrale, Zangerl had just completed a nightshift at the Bludenz Hospital (where she works as a radiologist assistant) at 7:00 am, before heading straight to the crag. She clipped the chains that evening, joining the slim ranks of climbers with the coveted 9a badge. “It was a real surprise,” Zangerl said of her send. “When we arrived it was raining and pretty humid, so no expectations at all. I had two really good tries and reached a new high point, then was tired after two tries. I thought, I will give it another try just for training, and then I sent the whole route. There was no pressure at all,” she said, “because I already thought I was too tired and still not close enough to send.”

When asked to describe the route in two words, Zangerl responded, “perfection and speed.” -Owen Clarke