Another Successful Rescue: Mathieu Maynadier Injured in Tagas Valley, Pakistan, on Expedition with Favresse and Molina 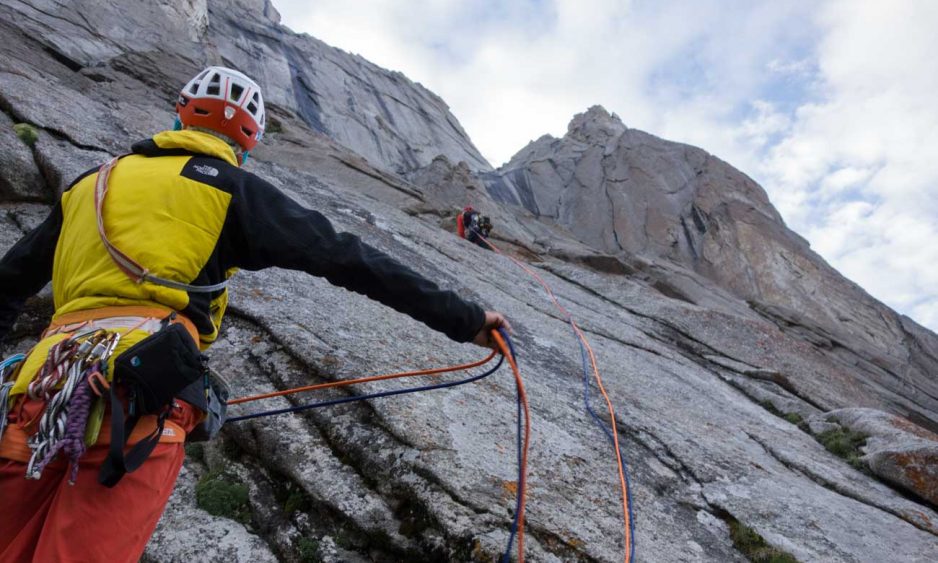 A shot from one of the team’s first attempts at a new route in the Tagas Valley. They ended up retreating. Photo: Jean-Louis Wertz.

After two accidents in the mountains of Pakistan—one on Ultar Sar, the other on Latok I—that resulted in dramatic rescues in the past month alone, word now comes of a third close call and another successful rescue operation. Around 11:00 pm (Pakistan time) on August 6, the French climber Mathieu Maynadier—who was on a first ascent expedition to Pakistan’s Tagas Valley, along with the Belgian Nico Favresse, the Argentinian Carlos Molina and Belgian photographer Jean-Louis Wertz—was hit by rockfall 300 meters up an unclimbed wall.

The Tagas Valley is a remote area lined with big walls and had never been visited by foreigners, let alone foreign climbers. Reaching the Valley with full supplies took the team and 28 porters multiple days of hiking. In an email to Rock and Ice on July 31, Favresse reported, “We finally set our camp at an elevation of 4900 m just below a very impressive pillar. It feel incredibly special to be the first foreigners to enter this valley and set our eyes of climbers on its mountains.”

The team hoped to open a number of new line on the soaring rock spires, and to rely on their different “styles and visions,” as Favresse put it. Favresse is well-known for his big-wall first ascents from Patagonia to Venezueula to Baffin Island. Molina is an accomplished Patagonia climber with a full bag of tricks, whom Favresse wrote has “been on every major summit of Patagonia.” Maynadier is an alpinist and a mountain guide in France, his most notable first ascent being Close the Door (1,300 meters ED), on the 6,830-meter Lunag II, in Nepal, for which he was nominated for a Piolet d’Or in 2011, along with Max Belleville, Mathieu Detrie and Seb Ratel.

Rock and Ice received word an August 6 (Colorado time—by then it was August 7 in Pakistan) of an accident on the expedition. Shamyl Sharafat Ali, a finance professional who lives in France and has extensive knowledge of the rescue system in Pakistan, coordinated the rescue. He wrote to Rock and Ice: “Renowned French climber Mathieu Maynadier has just been hit by rocks falling down while climbing up a mountain in Tagas Valley. He is concussed at the moment because of rocks hitting his head. He also has an open fracture on his arm. Arranging heli-evacuation through Askari Aviation. He’s reported at an altitude of 5500 meters.” The accident happened when the team had already been on the wall for five days, during which they made the first ascent of a new route to a virgin summit.

Originally, Shamyl was in direct contact with Favresse. Shamyl messaged that Maynadier’s condition was “extremely worrisome.”

Maynadier regained consciousness while still on the wall. His partners got him into a portaledge and prepared to descend. The team decided to self-rescue off the wall due to several factors: the steepness of the wall, which precluded any possibility of a longline rescue of the type performed on Latok I; continued rockfall, making any helicopter rescue an even riskier affair; Maynadier’s improving lucidity; and a good weather forecast, which would allow them to descend safely.

When he regained consciousness, Maynadier began communicating directly with Shamyl. “He’s under a lot of pain but he’s grinding it out,” Shamyl told R&I.

After learning of the accident, Shamyl began coordinating with Askari Aviation for a helicopter evacuation. At 12:27 pm on August 7, after the team had reached the glacier below the wall, two Ecureuil helicopters retrieved Maynadier at a landing zone prepared by Favresse, Molina and Wertz. He was transferred to a military hospital in Skardu. Shamyl said, “The good news is that his arm is not broken. Secondly, a CT scan was run for his head injury and scan result is totally normal. … Mathieu just needs a couple of days to get to his usual active self.”

While this third major accident in just over a month ends without loss of life, the first two were not so fortunate. On Ultar Sar, Christian Huber died during an avalanche, from which his partners Bruce Normand and Tim Miller narrowly escaped. On Latok I, Sergey Glazunov died in a rappelling accident while descending the north ridge with his partner, Alexander Gukov.

[UPDATE: SAVED!] Russian Climber Alexander Gukov In Peril On Latok I, Rescue Operation In The Works

Ultar Sar: An Avalanche, a Rescue and a Death in the Karakoram

Nanga Parbat: Rescuers Save Revol, Could not Save Mackiewicz