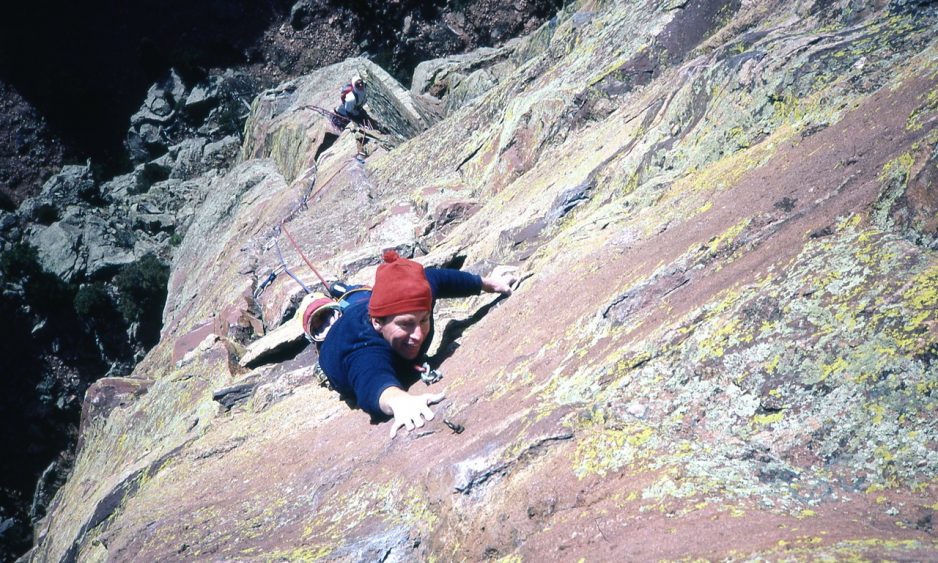 Andy Brown had so much energy that after a full day, he would head to the pub till closing, and then go caving—starting at 11 p.m.

“Why waste daylight when it’s pitch black down there?” he would say, as his friend Steve Rimmer recalls.

Andy will be remembered as wildly funny—with a dry British delivery that could crack up everyone in the room, while he sat straight-faced—yet supremely competent. He was a talented Outward Bound Instructor, a gifted professional ski patroller, a park ranger, a paramedic, and a generous caregiver for his ailing wife, who died only a couple of weeks before he did—of the same illness, and even on the same couch in their home.

He loved to race motorcycles, and was crazy about Elvis, Billy Idol and the Who. As an enthusiastic rock climber for over 40 years, he put up new routes in Estes Park and Buena Vista, Colorado; Pocatello, Idaho; and near his home in Comox, Vancouver Island, British Columbia.

Age 66 at the time of his passing, Andy was born May 16, 1954, in Congleton, near Manchester, England. Rimmer, who met Andy at college in Britain in 1970, recalls starting climbing with him and a close knit group of friends at Ramshaw Rocks in Staffordshire, England. Later Andy climbed in Snowdonia, North Wales, and other venues including the Alps.

In college, Andy studied drama, and later moved on to teacher training in London. There he was legendary for his dancing, which included backflips and break dancing. Later in the 1970s, he became a punk enthusiast, sporting a wild head of red hair. Attending shows for the Clash, Debbie Harry and the Sex Pistols, he would always be up front, pogoing madly.

In 1980, Andy met Johnny Adams in Wales, and they made a plan to go to Yosemite the following year. They climbed the Nose in the fall of 1981, shaken by an earthquake in the middle of the night. It was during that trip that I first met Andy. At the close of their trip, Andy announced he was remaining in the U.S. While Andy was in the Valley he met Susan (Lotus) Steele, whom he later married. They climbed together, and then Andy was offered floor space in a house of climbers in Boulder.

In 1982, Andy met Lotus’s friend Michael Lindsey, who thought Andy would make a good Outward Bound instructor. Although Andy wasn’t an experienced skier, he had taken a mountaineering leadership course in Scotland. Thus began a memorable career as a fulltime Outward Bound Instructor, working both summer and winter courses.

A friend and fellow instructor, Wally Berg, recalls how, while based at Outward Bound’s Mountain Center in Leadville, Andy worked to improve his skiing skills at Ski Cooper on Tennessee Pass; they often skied together. Wally remembers Andy’s good humor and athletic ability would carry him through, to make him an excellent winter instructor. One student fondly remembers him warming her frozen toes on the side of Mt. Elbert during a winter course.

In 1984 Andy and I agreed to climb the Shield route on El Capitan. Calm and funny throughout the five days it took us, he was the best partner you could want. In particular I recall him doing most of the hauling the first day or so, which was the lowest angle terrain, in order to save my bad back.

During a winter course with Wally around 1985, as the group sat out a bad storm on Champion Pass in snow caves, Andy turned to Wally and said, “Wally, you know those guys on Ski Patrol at Copper Mountain…they just go home every night.”

The following winter, 1985-86, Andy stopped working winter OB courses. Still living in Leadville, he would drive to Copper Mountain to wash dishes at night, and during the day would “ski with the patrol,” a common activity for prospective patrollers. Dramatically improving his skiing skills and knowledge of ski operations, while impressing the other patrollers with his enthusiasm, he joined the ski patrol the following year. He became a valued patroller with solid medical skills, and is well remembered for training his border collie avalanche dog, Owen.

At one point during that time, Andy spotted a skier a few chairs ahead of him in distress. Andy radioed ahead to alert patrol headquarters, and when he got off the chair began performing CPR on the skier, saving his life. The event made Denver TV news, bringing great publicity for professional ski patrolling.

Andy and Lotus parted ways in 1988. Sometime thereafter, Andy met a fellow Brit and OB instructor, Alison Stocks. The two moved to southwest Colorado so Alison could take classes to eventually become a physician, while Andy worked at the Wolf Creek ski patrol. When Alison began medical school in Denver, Andy became a paramedic there to support their growing family, which ended up being two sons and a daughter. Eventually they moved to Pocatello, Idaho, for Alison’s medical residency, remaining there for eight years. During that time Andy put up many new routes in the area, and he also became the head of the ski patrol at nearby Pebble Creek.

In 2000, Johnny Adams, Andy’s partner on the Nose and a lifelong friend, visited Pocatello. Andy had gained something of a reputation as an epic master, and in an email Johnny relates one such episode at Massacre Rocks:

Andy was full of his usual enthusiasm and managed to borrow a canoe to cross the mighty Snake River even though a fire had been raging there a week before. We got across the 1000ft crossing in fine style and soon after we were at the crag. When Andy was leading the second route smoke came in at both ends of the crag.

By the time we had bundled all the gear in our sacks flames had appeared. We ran with all our climbing kit on, the smoke was thick and we were covered in ash. When we got to the canoe the flames were 10 feet from it. We jumped in and pushed off. Andy insisted I take a photo of the area which was now engulfed in flames and thick smoke. While rummaging for the camera the canoe capsized nearly losing all our kit. We then had to swim with the canoe and most of our kit back to shore. The tree we had tied the canoe to was now in flames. We were able to stand in water while emptying the canoe and eventually got back across to safety albeit a long way from where we needed to be due to the thick smoke. Not quite over as Andy had left his lights on and the battery was completely flat!

In 2006, Andy and Alison’s family of five decided to move to Canada, settling in Comox, a small town on Vancouver Island. Alison worked as a family physician, and Andy worked on the ski patrol at Mt. Washington Resort. Sadly, in 2014, Alison was diagnosed with a brain tumor, and, in 2017 Andy left the ski patrol to care for her—which he did with great patience, kindness and compassion. Alison passed away on June 12, 2020.

Unbelievably, several months ago, Andy was also diagnosed with brain cancer. On June 28, he died at home surrounded by his three children, Alex, Sally, and Max.