An Image is Worth…?

The image of Wolfgang Güllich on the second move of Action Directe—weightless in mid-dyno, fully extended, his brown locks flinging about, mouth open and tongue out … is for me the most iconic photo of hard climbing ever taken. I dare you prove me wrong!

The photo encapsulates an era: the birth of nails-hard sport climbing by none other than the German legend himself, who, it needs to be noted, upped the level of difficulty four times, more than any other climber, past or present, a record likely never to be equaled unless Adam Ondra sends 5.16a and 5.16b before returning to the spaceship he arrived on.

Güllich sent the route in 1991, which made it the world’s first 5.14d. It was also the year I cinched up my first harness. In addition to posters of certain scantily-clad females exiting swimming pools, the photo defined my teenage years. Thomas Ballenberger was behind the lens and, I believe, Güllich’s wife Annette Favery was on belay, a nurse who he loved and adored. Favery’s face says it all. She’s belayed him on the route before—she has just enough slack out for him to make the opening salvo, a huge, very huge—as in massive—toss off a left-hand mono to a two-finger gaston pocket. She’s clearly worried about short-roping him. He’s clearly worried about not hitting the gaston. Sadly, Güllich died in 1992 in a car accident on the autobahn outside Munich. 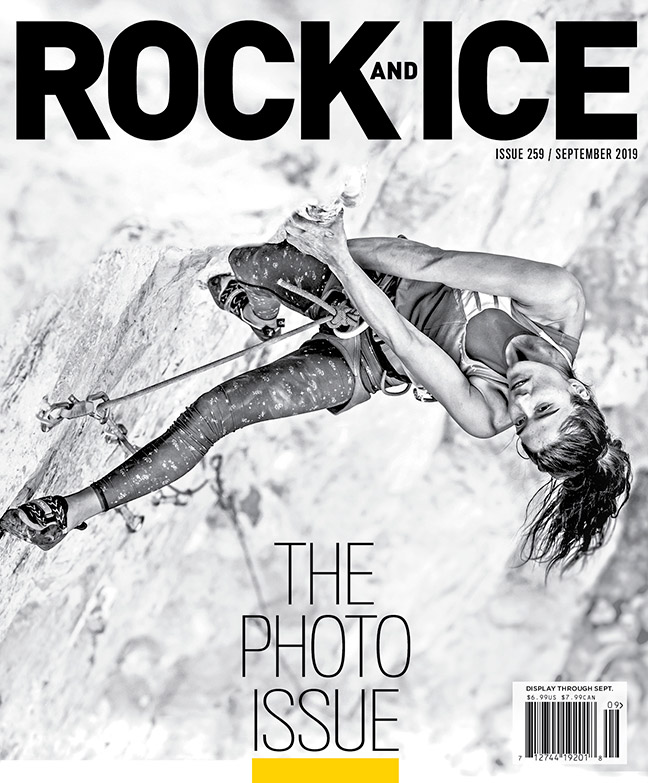 In 2018 an estimated one trillion photos were taken. That number will surely increase this year. Most of those images will never become ink on paper, instead relegated to mere digital flickers of light dancing across our retinas as we scroll through to the more memorable shots.

The majority of photos are disposable, blindly snapped in what can only be called a distinctly modern animal stupor. But yet, we snap away, hoping to capture something, anything, about a certain moment that justifies the labor of us taking it. We snap to remember, or so we can forget.

Prior to this photo issue, the image of Wolfgang had been vagabonding in my unconscious for a decade or so, milling about my perception of myself, exploiting my insecurities as a climber for not having done it, or even tried it, or even being able to do it.

Wolfgang was my first climbing hero and I wanted to climb just like him. I think … no, I’m quite sure … I was training to do the opening move of Action Directe for 10 years as a young ex-gymnast turned climber, just in case I was strolling around the Frankenjura someday looking for 5.14ds to knock off. The image was inspiration—I worked my way up to three one-arms on my right middle finger, and I’m proud of that … but I never could have done his route. The image was inspiring, but now it represents my failures. So be it. That’s life.

Per the quote by Wallace Stevens, the good photos work like this—they distill not to repudiate life, but to endorse it, become indistinguishable from who we are, or what we want to be.

Francis Sanzaro, the Editor of Rock and Ice, is on Insta and FB.

Desert Songs: A Photo Story of the Kings and Queens of the Buttermilks