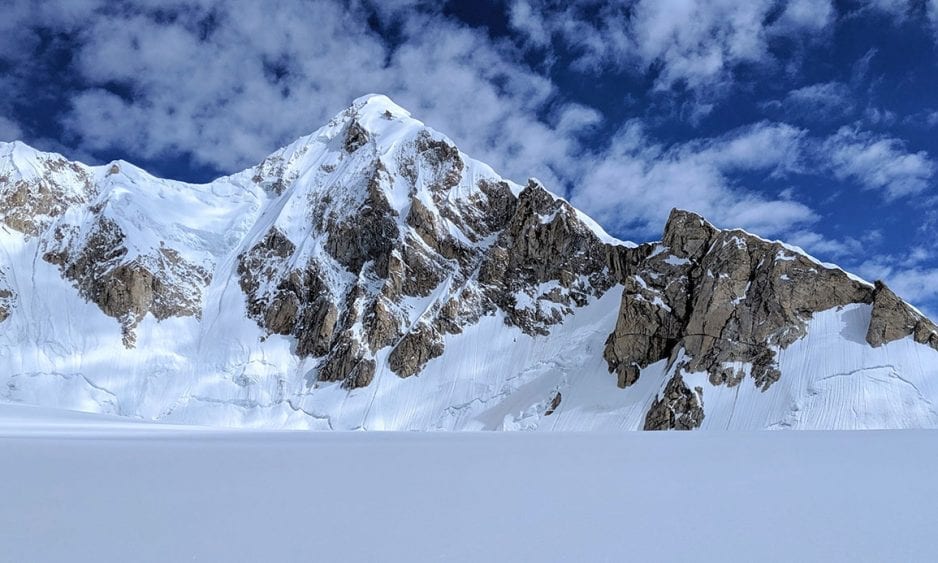 Sherpi Kangri II viewed from the south. The route of ascent followed the long ridge up the right skyline. Photo: Kurt Ross.

The climb, completed in August, took the team seven days from base camp to base camp. The trio had to shuttle loads between base camp and multiple advanced base camps, hence the week-long duration.

While they had originally hoped to climb a more technical route up the peak, they ultimately decided to ascend via the southeast ridge, which they anticipated to be relatively easy and free of objective dangers. “Without time to acclimatize as slowly as we would have liked after investing significant time and energy toward establishing those advanced base camps and carrying some of our loads to base camp, we chose the least technical route available for the sake of bailing quickly in case any of us started to show symptoms of acute altitude sickness,” Ross told Rock and Ice via email.

“I’m proud of this route regardless of its relatively non-technical nature,” Ross wrote. “It feels special to be the first team to tag a 7,000-meter peak this late in the timeline of alpine climbing.”

Marvell, Cornell and Ross’s ascent comes hot on the heels of another American success story in Pakistan. At the beginning of August, Graham Zimmerman, Steve Swenson, Chris Wright and Mark Richey were the first people ever to reach the summit of 7,041-meter-tall Link Sar. Swenson, who won a Piolet d’Or in 2012 for his ascent of India’s Saser Kangri II (7,518 meters) along with Richey and Freddie Wilkinson, called the climbing on Link Sar “one of the most complex and difficult routes I have ever climbed.”

Interview: Marek Holeček On The First Ascent Of The Northwest Face Of Chamlang