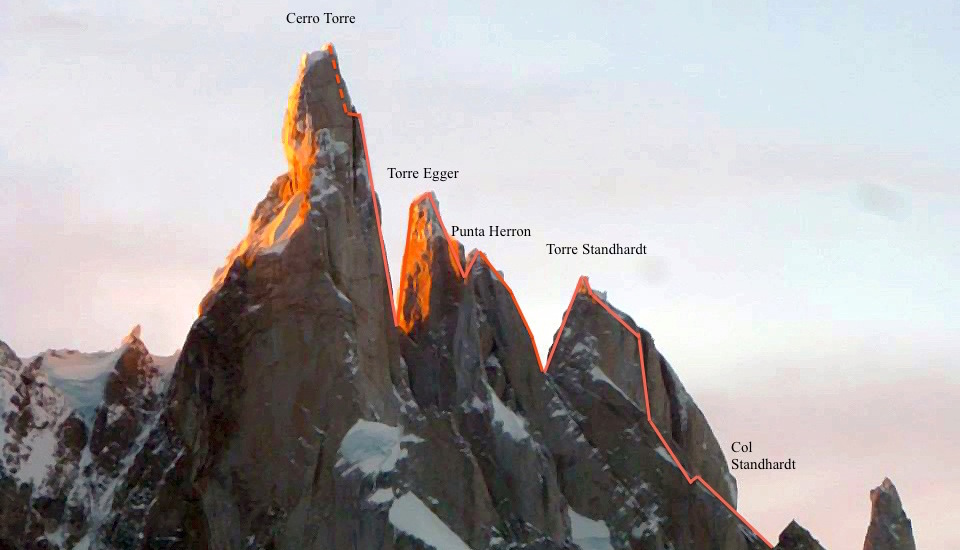 The Torres, showing the line taken by Honnold and Haley on their ascent. Photo: Hayden Carpenter / Olek Lato.

The Torre Traverse has been repeated. In just one day.

“Oh boy, how the times change,” Rolando Garibotti, who completed the first ascent of the Torre Traverse with Haley in 2008, wrote on PATAclimb.com. “This crazy sport moves forward in giant leaps … Yes, the Torre Traverse got climbed in a day! Seems like yesterday when it was a quixotic project that would never see the light of day.”

A team of Italians, who were captivated by the skyline composed of Torre Standhardt, Punta Herron, Torre Egger, and Cerro Torre, conceptualized the traverse in the late 1980s.

Between the late 1980s and early 1990s, the Italian team made several attempts on the route, piecing it together section by section, and in the process, established the first known ascent of Punta Herron. In 2005, Tomas Huber and Andi Schnarf were the first to link Torre Standhardt to Egger, completing the first leg of the traverse. That same year, Garibotti, Ermanno Salvaterra and Alessandro Beltrami put up Arca de los Vientos on the north face of Cerro Torre, which established the final piece of the Torre Traverse.

Finally in 2008, nearly three decades after the first attempt on the Torre Traverse, Haley and Garibotti completed its first ascent. After battling challenging conditions on the climb, the team finished the route in four days.

Last year, Haley completed the first reverse traverse of the Torres with Canadian alpinist Marc-André Leclerc. Climbing in the opposite direction to the Torre Traverse, Haley and Leclerc started up Cerro Torre and ended the traverse on Torre Standhardt, two and a half days later. They named the climb La Travesía del Oso Buda (5.10 A1 M5 WI 5-6 3,937 feet).

Later that season, Haley teamed up with Honnold to attempt the first one-day push of the Torre Traverse. Honnold, despite limited alpine climbing experience, was no stranger to Patagonian link-ups. In 2014 he teamed up with Tommy Caldwell to traverse the Fitz Roy massif, becoming the first team to successfully navigate the Fitz Traverse.

Haley and Honnold came close to their goal on the Torre Traverse. After 22 hours of climbing, the team stood just two pitches away from success, looking up at both the summit of Cerro Torre and an impending storm. They retreated down the west face of the peak.

Honnold and Haley returned this year to finish the climb in an astonishing 20 hours and 40 minutes.

“Something tells me this record will stand for a long time to come,” Garibotti wrote on PATAclimb.com.

This latest ascent adds to a Haley’s already tremendous season. Since arriving in Patagonia, Haley has put up the first solo ascents of Torre Egger, Punta Herron, Cerro Huemul, and his new route El Dragón on Cerro Solo. He and Andy Wyatt also made the fastest known car-to-car ascent of Supercaneleta on Fitz Roy, clocking in at 21:08 hours.

Watch Honnold and Caldwell on the Fitz Traverse: