On November 21, after an eight-day push, Adam Ondra topped out the Dawn Wall (VI 5.14d) on El Cap, Yosemite for the route's second free ascent. Rock and Ice caught up with Ondra to hear more about his time in Yosemite and experience on the Dawn Wall, and what he learned from it all. 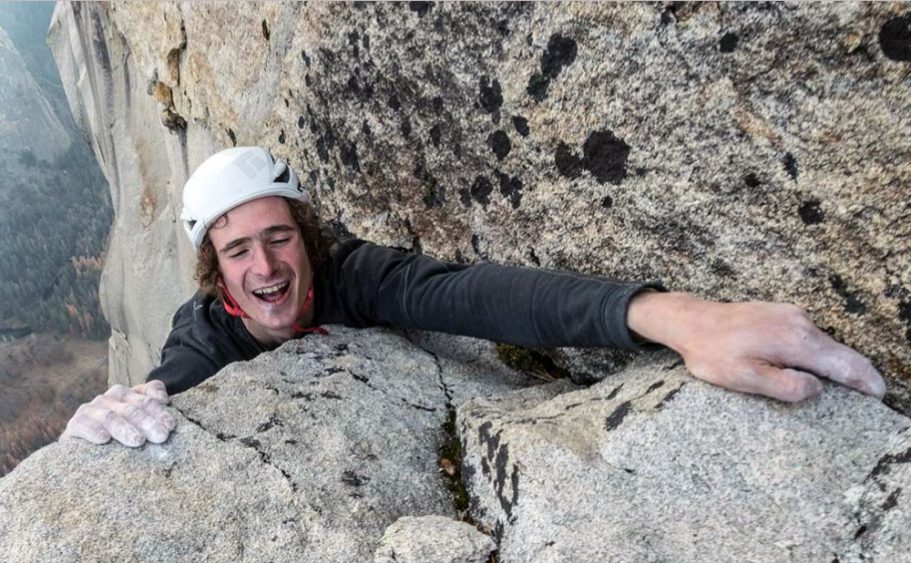 On November 21, after an eight-day push, Adam Ondra topped out the Dawn Wall (VI 5.14d) on El Cap, Yosemite for the route’s second free ascent—after Tommy Caldwell and Kevin Jorgeson’s historic first free, team ascent from December 27, 2014 to January 14, 2015. The 23-year-old, who describes himself as a “sport climber” and “gym rat,” had never climbed a Yosemite big wall. But nonetheless, supported by fellow Czech climber Pavel Blazek, he went after the hardest multi-pitch climb in the world.

Rock and Ice caught up with Ondra to hear more about his time in Yosemite and experience on the Dawn Wall, and what he learned from it all.

So, your first trip to Yosemite—what did you think? Did it meet your expectations?

Yosemite is an amazing place to be and climb! It is overwhelming, so different, so big. It definitely met my expectations in quality and how impressive it is. But the rest was different than I expected. You know, I was expecting that the cracks would be the biggest issue. But they are not the crux pitches on the Dawn Wall and in the end, crack is still a crack and it does not depend that much on the friction of the rock. But laybacks and face climbing are totally different to anything I have ever experienced. In the end, the most fun I had on El Cap was on the laybacks for sure. Even though it was the kind of climbing where I was getting my ass kicked the most, especially at the beginning. But they were some of the best, most memorable and classic pitches I have ever done!

What are some of the most important things you learned during the trip and while on the Dawn Wall?

I learned so many things. From big wall life essentials (efficient jugging, safety) to climbing cracks and laybacks and different mental approach to this kind of climbing. I learned I had to climb much slower and relaxed. That was the key to really do the hardest pitches. The regular (simple, aggressive, precise) style I use for sport climbing just did not work on Dawn Wall. Because on the Dawn Wall, being aggressive and precise is impossible. One has to be relaxed and precise, but at the same time be very present, but not too nervous or worried too much about slipping, having the flow.

The first few weeks were humbling, it cut my confidence to minimum and only slowly I was gaining my confidence back. I am not sure if I learned to have much more respect to things that are as completely new to me as Dawn Wall climbing. At the same time, new things in climbing are so tempting to me and will always be. In the end, I am proud that I managed to learn all the necessary tricks of big wall and Dawn Wall climbing.

What do you know now that you wish you knew when you first arrived in the Valley?

Haha, that would be quite a long list. First of all, I wish I knew that Yosemite climbing requires so much fitness. I would have trained harder. To be honest, I underestimated it. I was in super good shape in Paris (mid September), three or four weeks before departure. So I wanted to make use of it instead of training. So I ended up sending a few good sport climbs. I should have trained instead. I thought Dawn Wall would be most of all fingery. But laybacks felt so physical, and worse technique, the more physical they get. Being a little fitter would help.

I brought so many different shoes, but in the end only Katana laces work for me. And “comfortable sized” shoes just do not work on DW, not even on relatively easy pitches. Tight shoes only.

I would have started using Antihydral earlier.

I would know that climbing Dawn Wall is so condition dependent. Part of the reason why the pitches felt so hard in the first weeks was because it was so hot. Some days it is better not to even bother going up.

I would have brought more comfortable sleeping mattress.

More toilet paper for the wall, book on the portaledge, bring much MORE chalk…

And I would have trained my legs, especially calfs. You are standing for HOURS on tiny feet, and my weak legs of sport climber simply got shaky and tired.

What were your overall impressions of the Dawn Wall?

Hard. And totally badass. Super consistent and such hard style that is so special.
And most of the pitches are really enjoyable, some of them totally classic. Possibly the least enjoyable pitches are the crux traverse due to its sharp holds. But they are still totally unique.

It is an amazing challenge and I cannot think of any route in the world that would be comparable.

What was the crux of the climb for you?

Pitch 14 and 15 (14d and 14c). These are safe and bolted. The true difficulties are also in sharpness of the holds in these pitches. It is easy to make a split and once you make a split, it is hard to climb these pitches with tape.

The other hard pitches were pitch 10 (14a, 14b according to me and pretty bold) and pitch 16 (Loop pitch, 14a), because it is very insecure and easy to slip after 40 meters of climbing, which would be devastating! But to be honest, every 13c pitch and harder is hard and very easy to fall off/slip off. Most of the old-school limestone face climbs feel much easier to me to its grades.

But they are incomparable to any other routes in FJ or Flatanger, because they are so different. When you are not used to it, it feels insane. Once you know how to climb it, which shoes to have and which conditions to have, the grades seem right.

Did you think that the difficulty of the Dawn Wall involved more single moves, longer sequences, or entire pitches? Or the massive climb as a whole? Or climbing style?

Then, it is the insecurity of climbing, which is maybe part of the climbing style. I was not able to “walk” on 13c pitches as I would usually do in most of sport climbing areas. I had to be really focused. Because even when I was accustomed to the style, I still knew I could slip easily.

Single moves are quite hard, but that was not surprising.

Conditions are part of the difficulty. You are either lucky to get overcast day, or you climb two hours in the shade in the afternoon or dark. There is no other option. Climbing in the sun is no way.

Massive wall of El Cap is another reason. It is not so easy to work the crux pitches, jugging up there is tiring and staying up there many days is too, especially because it gets terribly hot at noon.

Reliable and precise topo of Dawn Wall by Erik Sloan. Some grades of the pitches have been changed according to my feeling. Check out rockclimbyosemite.com for the BEST freeclimbing guidebook of the Yosemite Valley. Released this year! Second half of the route follows on the next post. #Yosemite #Dawnwall #elcapitan

You called the fourth day of your final push a “complete disaster” and said that you felt a lot of pressure. What did you mean by that and how were you able to overcome the negative emotions the next day?

Usually, the most pressure I feel comes from myself. I set the goal and I want to accomplish that. Since I put a lot of effort or even make some sacrifice, the pressure is immense by itself. Normally, added pressure from public or even sponsors changes nothing. But considering the situation on Dawn Wall, that everybody is super curious how a sport climber and gym rat would do on the slick Yosemite granite with big runouts on bad gear… Mmm, I must say that I felt a bit more pressure than on the sport climbs or comps.

I was out of my comfort zone. I was nervous. Really nervous. And on day four I was not able to deal with it. On day five, I started climbing more relaxed, I was maybe less motivated, but still determined. And I just sent the pitch. Not easily, but there was a margin.

Did you ever think that the climb might not be possible for you, or were you pretty confident from the beginning?

There were a few hard days while working the route, when it was hot and it felt almost impossible. But had I known that the route is so condition-dependent… And then day four.

There are so many pitches, so many memorable moments… But I think the most happy I was after doing pitch 14 and 15 (9a and 8c+)… Because at that moment I thought I could really do it. But climbing DW is not only about the actual climbing. There is this whole experience of being there, and most of the time you actually do not even climb.

Are you interested in exploring more big wall climbs now?

I will stick to being a sport climber and going for the big wall once in a while. So, yes.

When you weren’t on the wall, did you stay in Camp 4 the whole time?

Would you ever return to Yosemite?

For sure. I have not scratched the surface of Yosemite climbing. There are another routes on El Cap itself and nobody wants to claim that potential for free climbing on El Cap is finished as the wall is one mile wide…

Would you consider attempting the Dawn Wall “in a day”? Do you think it would even be possible?

Yes. But very, very hard. If I cannot do it, somebody can do it one day. I might get psyched one day. I will see. But I must be much stronger and better climber.

What’s next? Any other trips planned or big projects in mind?

Some sport climbing shit. Nothing big.

*After pitch 16, Ondra’s pitch numbers are one off from topo map on right, i.e. Ondra’s pitch 21 is pitch 22 on topo. His personal grades also vary for a few pitches.