A Peek Into the Piolets d'Or: Catching Up With the 2019 Winners in Poland
News +

A Peek Into the Piolets d’Or: Catching Up With the 2019 Winners in Poland

The Piolets d’Or—the Golden Ice Axes for you non-Francophones—are like the Oscars of alpine climbing: a jury, comprised of some of the leading alpinists of yesterday and today, many of them past Piolet d’Or recipients themselves, choose what they deem to be the three “best” mountain ascents from the past year. 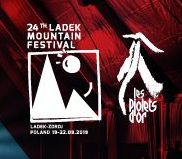 Rock and Ice is here at the 2019 Piolets, which are being held for the second consecutive year in Poland, as part of the Lądek Mountain Festival, in Lądek-Zdrój. Located in Lower Silesia, Lądek-Zdrój is a small town nestled in the countryside—its center has a series of streets, some covered in cobble stones, terraced into the hillside, give way to rolling green hills just a few minutes in any direction. Town center is also epicenter of the festival. The 6,000-person town grows by half during the festival, as thousands come to see the awards ceremony, mingle with the best climbers in the world, watch mountain films, and attend talks and presentations.

We’ve already sat down and chatted with some of the winners (or those accepting the awards on their behalf—David Lama and Hansjorg Auer, two of this year’s recipients, died in April), as well as some of the other big names in attendance.

Below are some snippets from these interviews–reactions to winning, thoughts on being here in Poland, and random musings!

[On how the accident with Sergey Glazunov and Alexander Gukov affected his, Ales Cesen and Tom Livingtstone’s mindset going into their attempt on Latok I] Our style of going about the climb—slow and steady and conservative–had something to do with us being able to decide on still trying after what happened.

Also I think about risk like this: Just because something did or didn’t happen to someone before, like Glazunov and Gukov, that doesn’t mean it will or won’t happen to me. There are always parts of risk that you can control, and there are always things you can’t. So you control the parts you can.

@alescesen @lukastrazar and @tom__livingstone 's ascent of Latok I via the north ridge to the north face to the south face is the third Piolet d'Or honored ascent this year. . Theirs was only the second ever ascent of the peak. Their line followed roughly two-thirds of the north ridge before traversing right across the north face to gain the col between Latok I and II, and finally reaching the summit via the south face. They reached the summit in 5 days, and were back in base camp after another 2, for 7 total. . In an interview with Rock and Ice afterwards, Livingstone said, "I take pride in our ascent of Latok I. Aleš, Luka and I climbed in control. We made sensible, strategic decisions. We were independent. We chose the easiest line. We returned safely after seven days. We didn’t lose fingers or toes. Alpinism is a dangerous game. If you don’t return home safely, you lose. If toes are amputated due to frostbite, you lose." [Link to full interview in profile.] . The north ridge was the objective of the famous 1978 American expedition comprised of Jeff Lowe, Jim Donini, Michael Kennedy and George Lowe. That first expedition came just 150 meters shy of the summit before being forced to turn back on day 20 when Jeff Lowe became severely ill. In the 40 years since that expedition, dozens of expeditions have tried and failed to conquer the north ridge or face. . Not long before Česen, Stražar and Livingstone's successful ascent, Russian alpinists Alexander Gukov and Sergey Glazunov reached the top of north ridge proper, but failed to reach the summit. During the descent, Glazunov fell to his death during a rappelling accident on July 25 as the pair retreated from a highpoint of 6,975 meters. Gukov, left with insufficient gear to continue descending by himself, spent six frigid days stranded at 6,200 meters before a daring longline helicopter rescue executed by Askari Aviation pilots. . . . @festiwalgorski #24FG #LadekMtnFest. . . #rockandice #rockclimbing #climbing #pioletsdor #ladekzdroj #poland #mountaineering #alpinism #latok #latok1 #karakoram #pakistan #firstascent

[On David’s perspective on risk] I think he knew very well that risk was always there. But life is a risk—your whole life is a risk. You can get hit by a car on the street and get taken away. Life is not always glad, it doesn’t always follow a straight line.

He knew very well what he did. He knew death was possible.

[On the outpouring of love and admiration for David around the world following his death] We have a a lot of friends from him: all the people around him, they come and want to speak with us and tell him that they miss him

They write thousands and thousands of condolence letters. Lots of mail. Lots of phone calls. They miss David.

The Piolets d'Or jury recognized three climbs completed in 2018. Among them was the late David Lama's solo first ascent of Lunag Ri, a highly technical 6,895-meter peak in Nepal. . Lama had tried it twice before, in 2015 and 2016, both times with Conrad Anker. (In 2016, Lama made a solo attempt; Anker was evacuated after a heart attack.) . In 2018, Lama returned solo, with Anker's blessing. Over the course of three days, pushed to his limit, Lama endured minus 30 degree Celsius temps and 80-kilometer-per-hour winds. Eventually he reached the incredible, pulpit-like summit. Lama told Rock and Ice in an interview upon his return, speaking about pushing close to the edge, "It’s always good to see that line, but it’s always hard to see it until you cross. Since I didn’t cross it, it’s great, but it feels like I was really close." [Link to full interview in profile.] . Earlier in his career, Lama was one of the best competition climbers and sport climbers around. But, he explained to Rock and Ice, that's not what inspires him these days. "Alpine climbing just seems more exciting to me these days. It’s the place where my heart is at this moment and where I see my future," he said. "I really love the combination of ice, rock and snow in mountaineering and alpinism. I think it’s incredibly challenging to always decide which line and what route and what conditions and how are you going to make the best of what the mountain gives you." . Read the full interview on rockandice.com . Photo: David Lama/Red Bull Content Pool. . @festiwalgorski #24FG #LadekMtnFest . . . #rockandice #rockclimbing #climbing #pioletsdor #ladekzdroj #poland #mountaineering #alpinism #davidlama #lunagri #nepal #firstascent

[On what the award means to him] I think that I am receiving this award on behalf on my whole genertion. It’s more than. In the ’70s, ’80s, ’90s, it was the golden age of the Polish Climbers. I had the pleasure to be one of them. Some people passed away. So this honor is not not just for me.

But I am happy to join [the others who have won this award before], people like Bonatti, Jeff Lowe, Roskelley. It’s nice to be in this group.

And now I am the second Polish climber [to get the Lifetime Achievement Award]. Wojciech Kurtyka also won. It means that we wrote a part of the story, Polish people.

[On whether he will go back to K2 with a Polish team in winter] We’ll give a chance to Denis [Urubko] this year. [smiles] But if they’re not able to do it we’ll go next year. 2021.

The problem now is finding Ice Warriors. They all died.

I think we may organize a few expeditions this winter to Pakistan to test and find some younger climbers and see if they can climb in the tough conditions. And then choose 4 or 5 to take with us. We need to find young guys who can climb in bad weather.

40 years ago we had no money, but 30 to 40 Ice Warriors. Now we have money, sponsorship, but no Ice Warriors!

But! If we don’t find Ice Warriors, my idea is to send letters to the best all over the world, and make a super team, to make it a common effort. Invite guys like Simone Moro, Denis Urubko. Maybe they’ll refuse! But it could be nice.

[On the Polish legacy of winter climbing] Mountaineering is the national sport here in Poland. It’s not like anywhere else. It’s like Jerry Lewis going to Europe–it’s a big thing.

They’re not olympic contenders in many sports, not the best footballers. But climbing mountains—they do that as good as anyone.

I’m happy with what I got done in the mountains. I don’t need to go there anymore. I spent a dozen years on the board of the Conservation Alliance, working with public lands. Now its climate chnage. It’s something that affects all people around the world, regardless of who or where they are..

Update from day 2 of the @pioletsdor at the @festiwalgorski here in Lądek-Zdrój, Poland! Rock and Ice has been hanging out with @conrad_anker – he’ll be giving a talk tomorrow about the late David Lama’s ascent of Lunag Ri, one of the Piolet d’Or-winning climbs this year. . Having the Piolets d’Or in Poland is pretty special – not least of all for the Poles themselves. Their history om the world’s biggest mountains is unparalleled, and @conrad_anker gives us a little background here 🙏 . . . #ladekmtnfest #poland #pioletsdor #rockandice #rockclimbing #climbing #alpinism

[Thoughts on the Piolets] The only thing from my point of view that is strange—with the technology that we have to track climbs, and with the values that we have to look at climbs— is that there isn’t just one award. I think we have enough knowledge that we can decide that just one climb is the best one.