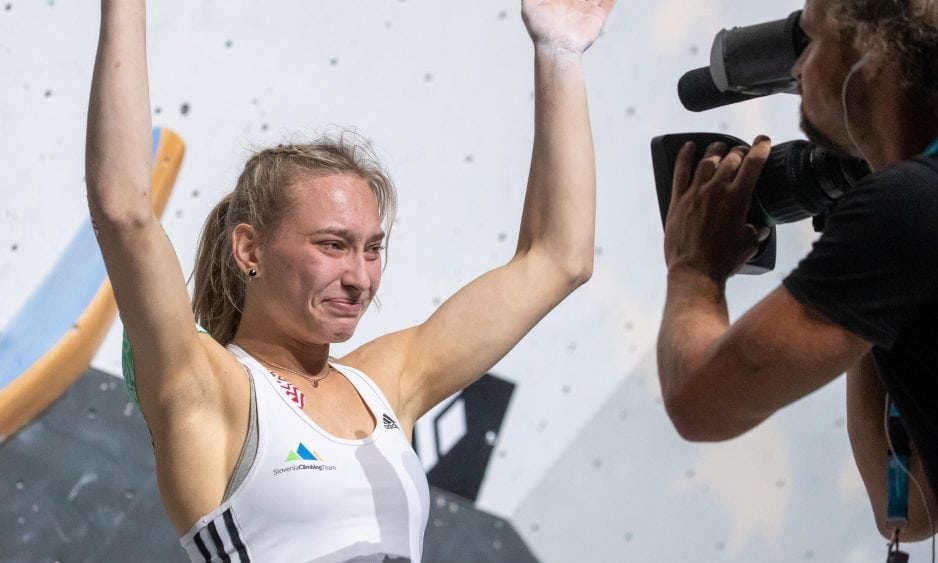 The Women’s Bouldering World Championships are over and a new champion has been crowned: after multiple days of fierce competition and much anticipation, Janja Garnbret of Slovenia clinched gold. Here we take a look back at the semis and finals drama.

In semis earlier today, Janja Garnbret led the round with three tops, all first try. Japanese powerhouse Miho Monaka snuck into the finals in sixth place. Her teammate Akiyo Noguchi needed to send problem 4 in just two or three tries to punch her ticket to finals—which is precisely what she did with a fantastic finish.

Margo Hayes and Alex Puccio were the only Americans to make semi-finals, and between the both of them, they only topped one boulder. Hayes topped out the second problem, which began with a techy but dynamic shoulder move, then an awkward left hand latch, then a sloper finish. She looked strongest when the problems provided several possible methods, and she could utilize her route-reading ability for an alternate solution, such as for problem 4, which found the women sitting, squatting or bear-hugging a large sloping disc only to have to mantle it and reach overhead to and upside-down dish.

Puccio fell ill a few days ago, and had a leg injury one-and-a-half months ago so, while disappointed that she did not make finals, was still happy with her performance. “I did the best I could do,” said Puccio. “And I was just glad to be here.” As a dry run of the Olympics,  Innsbruck did a really “good job organizing the event,” Puccio said.

After a few hours rest, the competitors took the stage once again to compete for gold. The competition featured cryptic, difficult boulders that showed off the immense skill and strength of the athletes.

W1, the first boulder of the night, involved an explosive, dynamic, coordination dyno and proved difficult for every competitors. Only Janja Garnbret was able to top the boulder while Staša Gejo of Serbia was the only other woman to reach the Zone hold.

W2, a powerful pocket-strewn climb featuring an inverted double-toe-hook-cum-bat-hang, proved equally as difficult. Garnbret was the only competitor to score points on W2, reaching Zone 1 but not topping the problem.

W3, a slab featuring deviously small holds and requiring a lot of body tension, saw three tops from Gejo, Noguchi and Garnbret. Nonaka and Pilz—the Austrian who won the gold in the lead competition earlier in the Championships—both managed to make it to the Zone, earning points for their effort.

W4, the last boulder of the night, an overhanging power problem, saw only one top, by Noguchi. Nonaka and Pilz both reached the Zone.

Paraclimbing World Championships Come to a Close in Innsbruck