Not a bad day at the office for Kacper Tekieli. 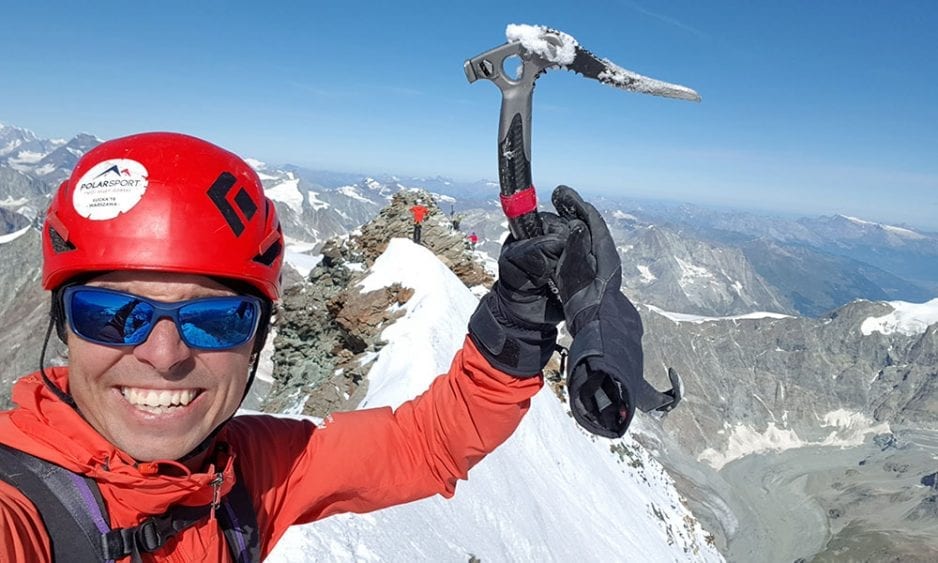 Tekieli on the summit of the Matterhorn for the first time on August 4, after climbing the Furggen Ridge. Photo: Kacper Tekieli.

Climbing the Matterhorn is a bucket list item for most climbers. Climbing it twice in a day while, hitting the four separate major ridges on the ascents and descents? That’s another level.

It has been done at least a handful of times before—first in 1966 in 19 ½ hours; and notably by Hervé Barmasse, solo in winter, in 2014 in 17 hours. Kacper Tekieli, a 35-year-old Polish alpinist, became the most recent to complete the enchainment earlier this month.

On August 4, Tekieli started up the Furggen Ridge (southeast ridge) at 6:00 am armed with a 20-meter rope stuffed in his pack, several carabiners and a MicroTraxion. He wore a harness with one sling girth-hitched through his belay loop.

He told Rock and Ice, “There is one really vertical step on Furggen Ridge. I used my rope on 10-meters of loose rock towers.” At the top of this section, he tried to retrieve his rope but couldn’t. “So I abandoned the rope,” he said. “It’s a shame, but I didn’t have a choice.”

After reaching the summit around 10:00 am, he descended via the Hörnli Ridge (northeast ridge) in roughly three hours. He had climbed the Hörnli once before in 2015, with fellow Poles Adam Bielecki and Jacek Czech.

Next, Tekieli climbed the Zmutt Ridge (northwest ridge). He spent six hours on this ridge, which he had never been on before. “The Zmutt Ridge was really an alpine adventure,” he said.

About 14 hours after starting up the Furggen, Tekieli reached the summit of the Matterhorn for the second time that day. After a quick rest, he charged down Lion Ridge (southwest ridge) in 3 hours and 30 minutes.

His final time to tick all four ridges, with two summits of the mountain, was 17 hours 30 minutes.

While Tekieli’s four-ridge, two-summit day is impressive by any metric, a more challenging version of this Matterhorn enchainment has been done: traversing the same four ridges but ascending all of them in a single day (rather than tagging two of them on the descents). That comes out to four summits of the Matterhorn in under 24 hours. In 1992, the Italian climber Hans Kammerlander and the Swiss guide Diego Wellig were the first team to complete this challenge, needing 23 hours 26 minutes to get it done.

The second and only time all four ridges have been ascended in a single day was in September 2018. Swiss climber Andreas Steindl and Italian Francois Cazzanelli shattered Kammerlander and Wellig’s former benchmark, finishing in 16 hours 4 minutes.

Monitoring The Matterhorn With Millions Of Data Points