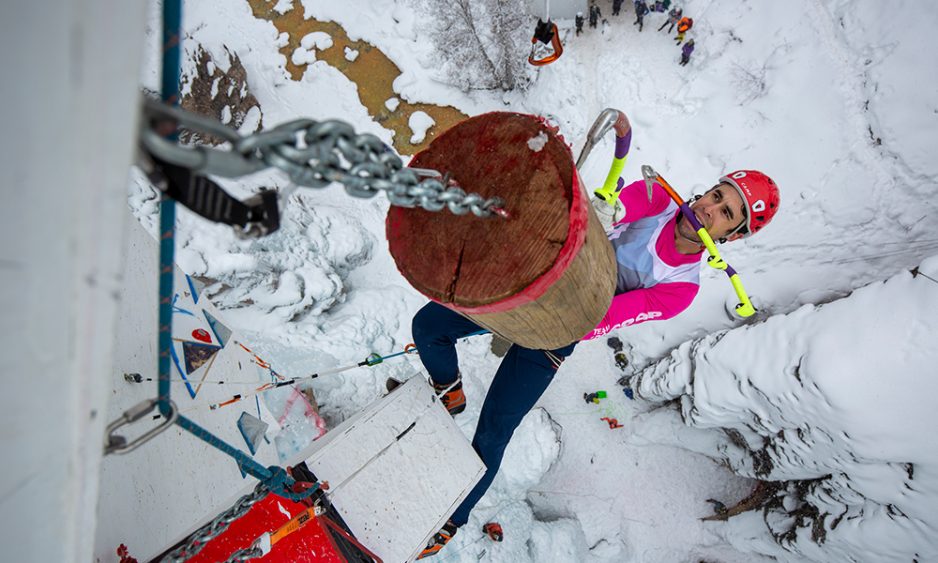 This year marked the 26th edition of the Ouray Ice Festival, which was first established in 1996 by the late Jeff Lowe. Over the years, the festival’s centerpiece competition has encompassed a variety of routes and climbing styles. But in all that time, there’s never been an event quite like this one.

When COVID-19 mandates from the Ouray County health department drastically limited gathering sizes, Ouray Ice Festival organizers put their heads together to rework this year’s fest as a virtual event. With help from sponsors and the state of Colorado, the Ouray Ice Park, a small city nonprofit, poured its resources into livestreaming a radically reimagined competition, expanding the traditionally single-day exhibition into a four-day, World Cup-style tournament.

For two intense days of qualifying rounds, 46 athletes gathered in the Uncompahgre River Gorge amid the snow-dusted San Juan Mountains. Missing this year were the crowds of spectators packing the canyon rim and the lower bridge. Instead, signs and roped gates deterred passersby, and only athletes and volunteers were permitted to linger and cheer. In the Ice Park, the competitors benefitted from a quiet, intimate atmosphere as they went head-to-head on Ouray’s traditional competition route, Mighty Aphrodite (M8), and on the artificial tower that extends above it.

On the livestream, though, stiff competition, 40-foot wingers, sophisticated cinematography, and dynamic climbing made for a high-production-value event that was anything but quaint. Renowned international climbing announcer Liam Lonsdale served as emcee, with assistance from the alpinist and longtime competition organizer Vince Anderson. Professional commentary and camerawork lent World Cup-level  flair and professionalism to what became a thrilling virtual showcase. The event was watched around the world, drawing tens of thousands of viewers from as far away as Russia, Korea, and Romania. (You can watch finals online here.)

Corey Buhay, of Colorado, finished first for women, the only competitor to top the ladies’ finals route. As an interesting bonus, she climbed one hold further to the top of the men’s route by mistake. She ultimately fell while clipping the men’s final draw, taking a massive whipper that elicited an uproar of cheers from the small gathered crowd of athletes and volunteers.

Rounding out the podium were Angela Limbach, from Wisconsin, in second, and Catalina Shirley, from Colorado, in third. All three women are competitors for the US Ice Climbing Team.

Due to travel restrictions, all competitors for this year’s event were Americans. Despite the limited athlete pool, the 2021 women’s field was the biggest the Fest has seen in years, as well as among the most consistent. A dozen women competed, and 11 of the 12 made it to the top of Mighty Aphrodite in qualifiers, all cruising the reachy crux which has historically proven a challenge for shorter climbers. On day two of qualifiers, the top four females not only reached the tower but out-climbed many of the mid-pack men.

The men’s finals route saw only one top, by Colorado-based climbing coach and US Ice Climbing Team member Tyler Kempney. In a heartbreaking call by the judges, his score was ultimately slashed due to a technical error on the ice curtain that separates Might Aphrodite from the tower; one tool had strayed out of bounds.

The 2021 Ouray Ice Festival finished out with its traditional closing ceremony and fundraising event, which featured virtual interviews with podium finishers Keenan Griscom, Cody Stevenson, Catalina Shirley, and Angela Limbach. The silent auction, also a beloved Ice Fest staple and major source of funds for the nonprofit Ice Park, will extend through January 27.