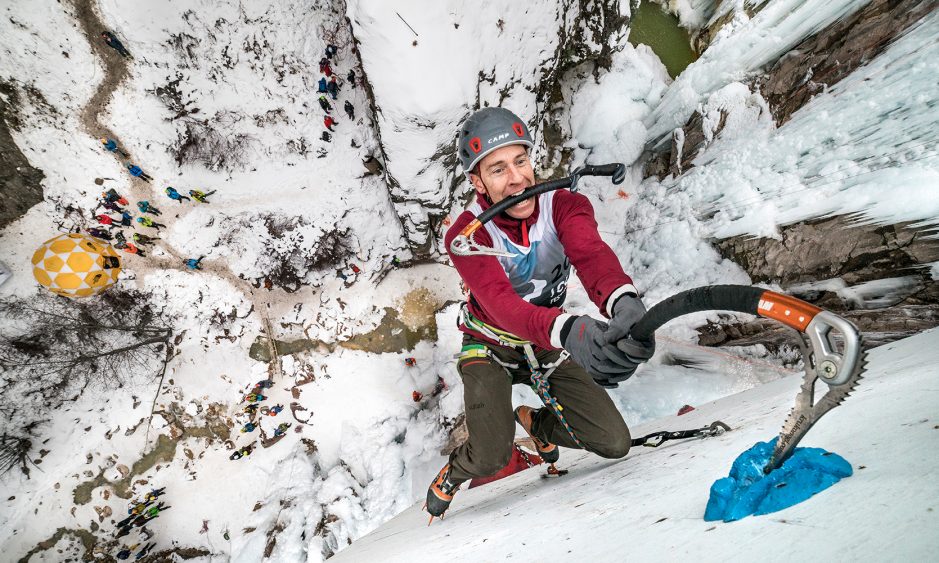 Ryan Vachon topping out the mixed-competition route at a past Ouray Ice Fest. Photo: Xander Bianchi.

While going virtual promises to keep the 2021 Ouray Ice Fest small, there’s one area where the park isn’t skimping: the mixed climbing competition—the Festival’s traditional centerpiece— will be the biggest ever.

A whopping 47 climbers applied to participate in this year’s Ouray Elite Mixed Climbing Competition on January 21-24, which has historically been an invitational. This is the first time park officials have opened up the application process to the general public.

It’s also the first year that the comp will include two days of qualifying rounds, an update that Competition Director Lance Sullins believes has made the comp feel more accessible to new competitors. He speculates that the boom in recreational climbing over recent years may have also contributed to the surge in numbers of mixed climbers, especially in Colorado.

This year, all 47 applicants have been accepted to participate.

“It will be the biggest field in Ice Park history,” says Ouray Ice Park Director Peter O’Neil—all the more notable since this year’s pool doesn’t include international athletes.

Sixteen of those 47 will make it to finals, which will take place on Saturday January 23 and broadcast via livestream. (Though the park will be open to climbers over festival weekend, no spectators will be permitted on the bridge or around the canyon rim during the 2021 competition due to COVID-19 regulations.) You can find the full 2021 Ouray Ice Fest schedule here.

“We’ve been able to really put a lot of energy into the production of the event. People are going to really get to hear the story and history for the ice park and the competitors—they’ll learn a lot more about the sport [than they might during a live event],” Sullins explains. “I think it’ll be a really good thing for the sport and a good thing for the Ice Park.”

Route Setting for the Big Screen

Viewers of this year’s competition can expect dynamic movement, swinging obstacles, and maybe even some ice-tool dynos if all goes according to plan, says Marcus Garcia, who has been tapped to route-set the event. A Durango gym owner, climbing coach, and longtime competitor, Marcus Garcia hopes to meld Ouray’s unique style—which has historically combined natural rock, ice, and route-setting that simulates outdoor climbing—with modern, gymnastic World Cup-style moves on the tower above.

The biggest challenge? The absence of in-person cheering spectators..

“Usually you have the energy of the crowds for the audience to feed off of, but [with a virtual event] it’s a different type of energy,” he says, noting that it’s up to the setter to bring the audience along for the ride, and make sure the difficulty and suspense of the climb translate to people watching on laptops at home. “I’m trying to work as the route setter and the storyteller with the route,” Garcia says.

While details are still being ironed out, Garcia says he’s especially looking forward to setting routes that will be equally challenging for both the male and female competitors.

“There are so many strong women who have competed at Ouray in the past,” he says, nodding to past winners like Ines Papert and Angelika Rainier. “Women kick ass at this sport.”

Where to Watch the 2021 Ouray Ice Fest

The livestream will showcase lead finals on Saturday. Viewers can find the link on a number of sites, including the Ouray Ice Park homepage, the Colorado Lottery website, and RockandIce.com. After the awards ceremony, the virtual Ice Fest will include a fundraising event at 5:00PM MT on Saturday January 23, including talks from athletes and sponsors. (Attendees can register online here.)

The virtual Ice Fest will also carry on the tradition of the Ice Park auction. The virtual auction begins on Monday, January 18 and will run throughout the week. Prizes include a day of fly fishing with Yvon Chouinard in Jackson, Wyoming; a day of ice climbing with Will Gadd; and guided outings with local guide services.

“For the community, the Ouray Ice Park is a huge asset. It drives up to 60 percent of winter visitation to the town,” says O’Neil. “We want this livestream to promote what it is we do.”

And if you miss it? Have no fear—the Ouray Ice Park has tapped a local production company to produce a feature-length documentary of this year’s event.

The Ice Park’s hope is that it will raise enough donations through the virtual fest to make up for the lost visitation revenue.

Corey Buhay is a writer and editor based in Boulder, Colorado. You can find her work in Backpacker, Climbing, Alpinist.com and Outside Online, among others. She is a member of the US Ice Climbing Team.