This kid is off the charts! By far the youngest to free the route (out of only six total), and he also climbs 5.14c sport. 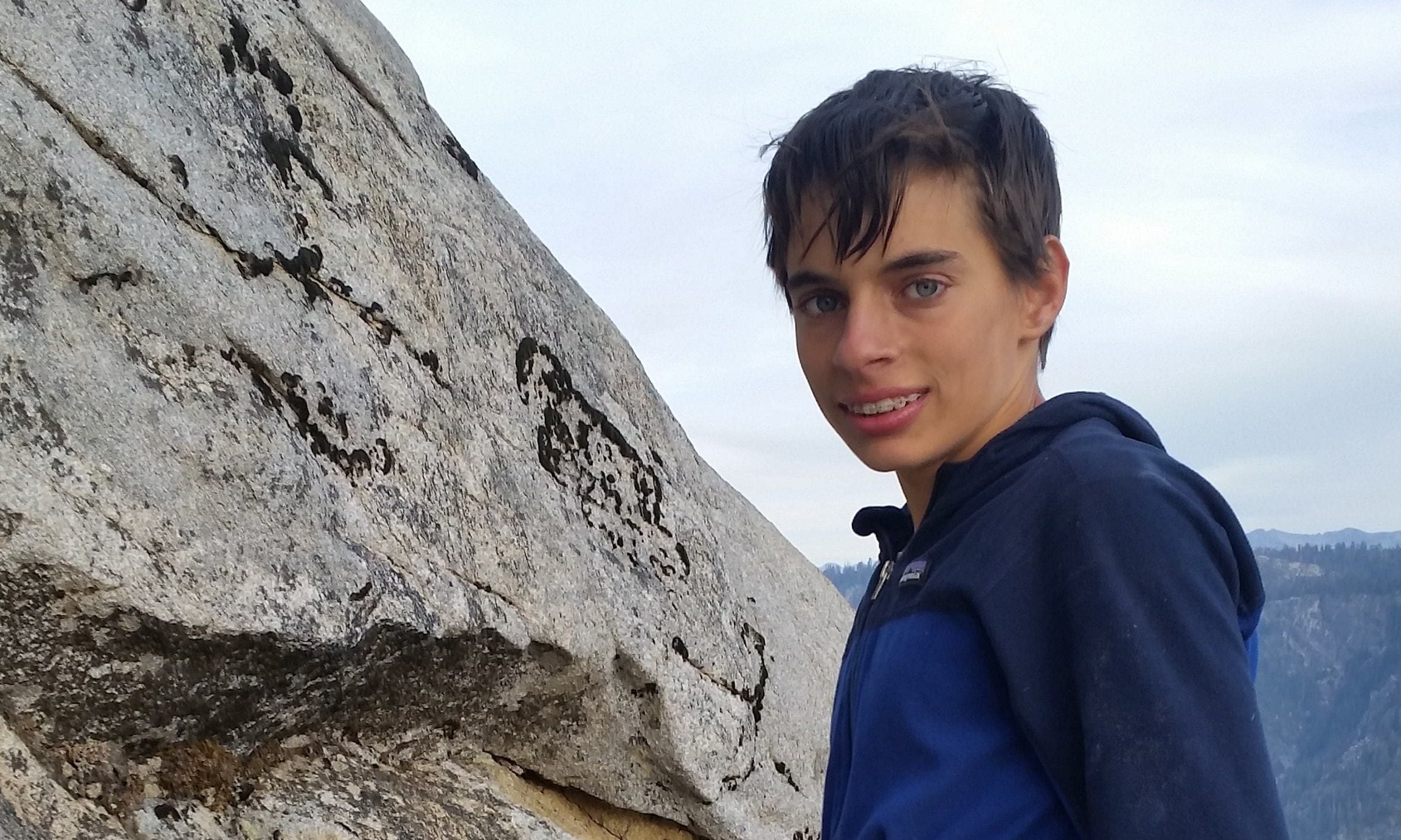 While most kids his age were studying for a chemistry test, Spark-noting The Great Gatsby, or sneaking out to a kegger in the woods, 15-year-old Connor Herson, from Emerald Hills, California, was casually completing the sixth-ever free ascent of the most famous rock climb in the world. This past weekend, Connor, supported by his father, Jim Herson, topped out the Nose (VI 5.14a), on El Capitan, Yosemite, California. He is the youngest person to free the route by a landslide: the next-youngest was Beth Rodden, who was 25 when she freed the route with Tommy Caldwell in 2005.

“It was a Saturday, Sunday, Monday ascent,” reports Jim while “bobbling down the East Ledges” Monday evening with one working headlamp between the two. “It might have been a two-day-ascent but there were fixed ropes blocking the Changing Corners.

“He was no-falls to the Changing Corners,” Jim Herson continues from the trail. “Then he had to wait for me to move the fixed lines. By the time I was done, he only had time for one burn, and he slipped off the crux exit move. It was heartbreaking but an awesome effort.” Connor sent the next morning.

His father, in a post enroute, had written on Facebook: “Dear Connor, Your climbing is only surpassed by the joy and tenacity with which you attack the audacious. Congratulations on redpointing the Nose of El Capitan in perfect weekender style!”

When Lynn Hill became the first person to free the Nose in September 1993, she was 32 years old and one of the best-known climbers of her generation. Tommy Caldwell and Rodden were also big-name climbers when they freed the route, in 2005. Connor, on the other hand, has only just landed on the scene, turning heads with hard climbs inside and out after a youth spent learning the ropes.

Connor was weaned on Valley granite from an early age, scurrying up routes on Half Dome, and climbing the Nose in a day for the first time at just 13 years old. Most of his Valley apprenticeship has been with with his parents, Jim Herson and Anne Smith, accomplished climbers themselves. In 2003, with Hans Florine, Jim made the eighth free ascent (after years of work) of the Salathé Wall (VI 5.13b)—90 hours after which Connor was born!

Working toward a free ascent of the Nose has been one of Connor’s main projects over the past year. Supported by his father, Connor made his first proper redpoint attempt on the route for the first time last week. He very nearly finished it off on that first try, redpointing the Great Roof (5.13d) on just his second burn and falling with just a foot left of hard climbing on the Changing Corners (5.14a) pitch. It was his first time ever leading either of those crux pitches. See below for two videos of Connor on those pitches during that first attempt.

While you might assume all Connor’s time spent on techy granite comes at the expense of hard sport climbing, you would be ever so wrong. He sent 14 5.14s when he was 14 years old, including a wildly impressive second-go ascent of Southern Smoke (5.14c), the Red River Gorge, Kentucky. Some of his other 5.14 ticks include Lucifer (5.14c), also in the Red; Galactic Emperor (5.14a), Ten Sleep, Wyoming; and a 5.14b (T-Rex, Maple Canyon, Utah).

Competition climbing is very much in the kid’s wheelhouse, too. In 2018, Connor was the male Youth B gold medalist at USA Climbing’s Youth National Championships, improving on his none-too-shabby silver from 2017. He has competed on the international stage as well, finishing 11th in sport climbing and 33rd in bouldering at the 2018 IFSC Youth World Championships in Moscow.

The past few days enter Nose lore as some of the most exciting in the route’s history. Just yesterday, November 18, the Japanese climber Keita Kurakami completed the first ever all-free rope-solo ascent of the Nose (his was the fifth free ascent of the route). And, as far as we know, Nina Caprez is still toiling away trying to sneak in a free ascent of her own. Could this be the first season ever to see free ascents by three different individuals?

Tim Klein: All About Others

News From The Valley! Jorgeson Does An FFA, Gobright Frees El Corazon In A Day, And More