I snapped the peroneal retinaculum on my right ankle while high stepping. Have you ever seen a climber who has gone through this injury? Has the person snapped it again?

I snapped my peroneal retinaculum on my right ankle while high stepping four months ago and had surgery to repair it a month later. I have been going to a physical therapist and she has told me I can do light running and easy climbing. I have concerns about climbing, especially since I don’t think my PT understands the strains placed on the ankles.I’ve been climbing in my post-surgery boot because I’m worried about snapping the ligament again. Have you ever seen a climber who has gone through this injury? Has the person snapped it again?

The majority of ankle injuries in climbers are either sprains that occur walking to the crag, or talus fractures that happen on impact. Peroneal retinaculum ruptures caused by climbing are next in line, but they are a distant third place.

When a climber rocks onto a high foothold, or sits down onto one foot, the ankle is pushed into extreme dorsiflexion (the opposite direction is called plantaflexion, which happens when you point your toe).

The tendons of peroneus longus and peroneus brevis pass behind the outside knuckle (lateral malleolus) of the ankle. When you maximally dorsiflex the foot, these tendons, under enormous load, are physically and architecturally anchored behind the malleolus.

The peroneal retinaculum performs much like the pulleys in your fingers, holding the tendons in place and close to the bone to enable motion of the foot.In 82 percent of the population, the peroneal tendons are located in a sulcus behind the lateral malleolus (which is actually the end of the fibula bone), making their position more structurally robust. Eleven percent of you don’t have a sulcus, and the remainder have a convex surface. Respective translation—shitty, and shittier!

When you combine shit anatomy with a big load, the retinaculum is subject to the cutting force of the tendons; it’s a bit like pulling a string through a folded piece of paper.

I would follow theadvice of yourPT. Surgery followed by rest, then progressive loading is the only option to achieve full capacity (and some). The surgery involves

reattaching the retinaculum and/or supplementing it with some harvested tendon tissue, along with deepening the posterior groove so that the tendons are essentially hooked behind the malleolus.

Gentle climbing on a toprope is fine for now. Avoid extreme rock-over positions with the same focus that you avoid poking yourself in the eye with a branding iron. This loading, more than anything else, needs to be progressive over the ensuing months such that the retinaculum, +/- a tendon graft, has time to heal and strengthen.

Eschew the sharp end of the rope for now since many factors beyond your control dictate how you impact the wall. Absorbing any force with that foot early in the rehab process is beyond bad.

The reality is that surgery will likely afford you an even stronger peroneal tendon restraint. If anything, I would be worried about the other ankle!

Training with a Finger Injury 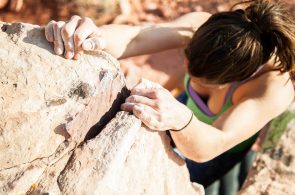 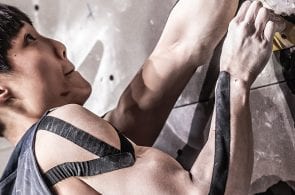 The Myth of Tape

Even pro climbers use therapeutic tape supposedly to support muscles and tendons, but it’s really more of a fashion accessory than a help, says Dr. J. 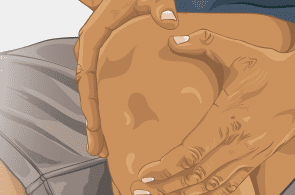 A pain in the knee!

The Myth of Tape