Gear Guy: What's the Correct Way to Girth Hitch to Your Harness? 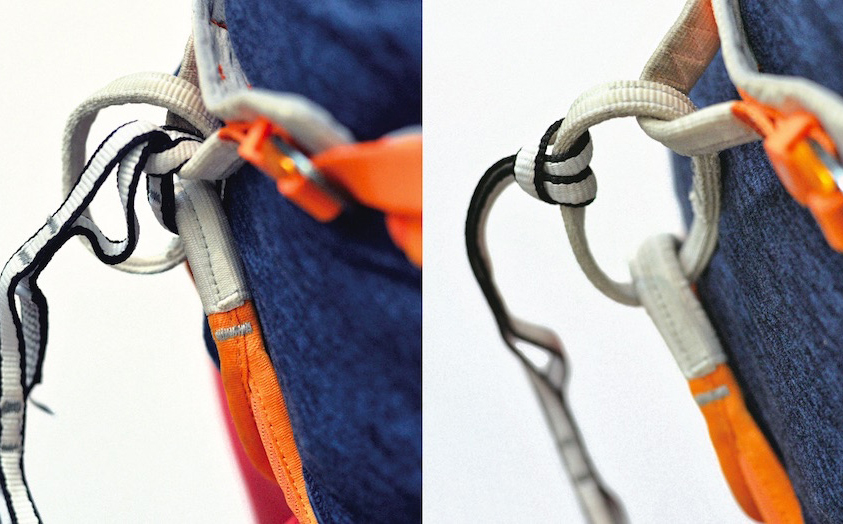 What’s the Correct Way to Girth Hitch to Your Harness?

I’ve heard that you should girth hitch daisy chains and personal anchor systems (PAS) to your harness leg loops and around the waist belt. Is this the correct way to do it? I don’t like it.

Todd Skinner died on the Leaning Tower in Yosemite in 2006 when the belay loop on his harness broke. Ordinarily, this loop is unbreakable, but Todd had girth hitched his daisy chains directly to his loop. Because the loop wasn’t free to rotate, every time he moved up in his jumars, the loop chafed against his leg-loop strap in the exact same place. The many, many thousands of feet he jugged eventually sawed through his belay loop. This might seem impossible to do, but consider that droplets of water can over time wear down granite.

Tests done on belay loops by Kolin Powick of Black Diamond showed an average breaking strength of 5,000 pounds. When Powick cut a loop 75 percent of the way through, it still held nearly 3,000 pounds. Even when a loop was cut 90 percent of the way through, it held 777 pounds. For Todd’s loop to break under body weight, it must have been worn almost completely through.

Even though no other accidents have been attributed to broken belay loops, and even though only a few climbers in the world would ever subject a harness to the high level of wear as Todd, and though his harness should have been replaced, harness and daisy chain and PAS makers now recommend that you do not girth hitch directly to the belay loop. They instead recommend the method you noted (girth hitching around the harness’s two “hard points”), which lets the belay loop rotate, eliminating the abrasion hot-spot that led to Todd’s tragic death.

I am with you. Girth hitching around the leg-loop strap and waist belt jams the two components together and can wad up your pants, like a load in your diaper.

But, better safe than sorry.

Regardless of how you attach your PAS or daisy chains, you can still screw up and hurt yourself. Neither the PAS nor a daisy chain is intended to catch a fall. They don’t stretch. Only use them to attach yourself to an anchor or your ascenders for situations where you can’t fall onto them, i.e., never climb above an anchor, not even a single move, while you are clipped to that anchor with a PAS or daisy chain.

Also recognize that gear wears out. Inspect your soft goods—rope, harness, slings, PAS, daisy chains—every time you climb. If it seems as if your life depends on it, it does. Next!