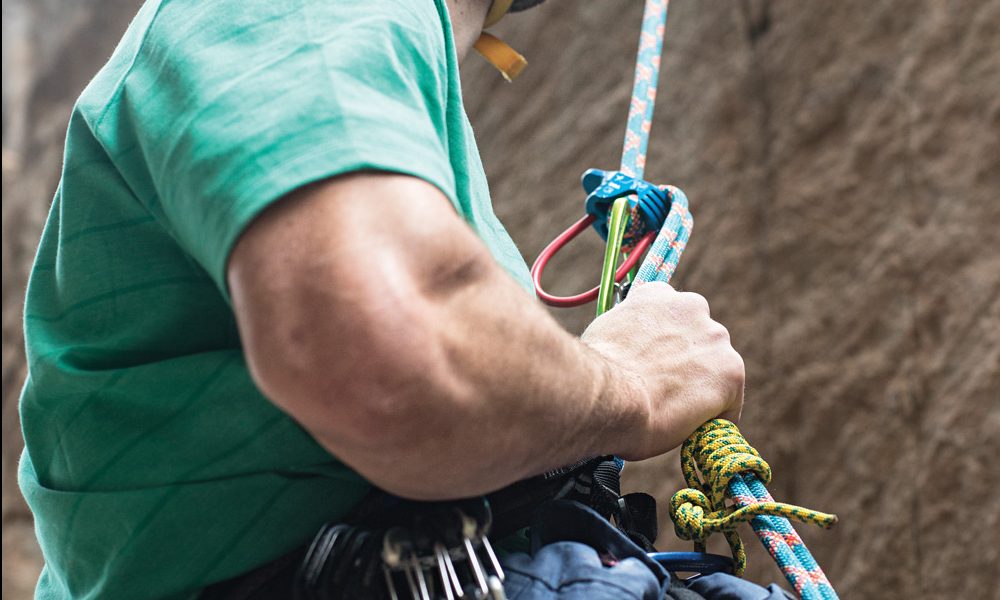 What is the difference between a prusik, klemheist and autoblock, and what are the pros and cons of each one as a back-up in a rappel system?

“Autoblock” generically refers to both the prusik and klemheist, friction hitches that lock onto the rope when they are weighted, and release when unweighted. Before the day of the Jumar, piton-hard folks such as Warren Harding used the prusik to shimmy up fixed ropes to their wine stashes on the Nose and even the Leaning Tower.

Some people say the klemheist grips better than the prusik when it is tied with webbing, and that the klemheist is easier to loosen and let slip while you are hanging from it. I haven’t noticed these differences—you can increase grip by adding wraps with either hitch, assuming you have enough sling material, and neither hitch is easy to loosen when it is weighted.

Both the prusik and klemheist work well in an emergency for climbing a rope, but they are mainly used as rappel back-ups. Choosing one hitch over the other is personal preference, but whether you place the back-up above or below your rappel device is as argued as intelligent design.

When I use a back-up, I set it above my device. I prefer this method because I can hang on the back-up and unweight and remove the rap device if I need to pass a knot or get a ponytail unstuck.

Rigging a back-up above the rappel device got bad press in 1976 when a novice, guided climber made his back-up prusik sling too long and tried to execute an overhanging rappel. His prusik locked up out of reach, and stranded in space on the rope, he choked to death. Note that he was not using leg loops with his swami belt.

Keeping the sling that connects the back-up to your harness a suitable, short length, and wearing leg loops, eliminates the risk. When you place the back-up below your device you also need to keep the sling short, and clip it to a leg loop so it can’t jam into your device.

Whether you choose the klemheist or prusik, or place it above or below your rappel device, don’t expect a back-up to stop you from rappelling off the end of the rope. Neither hitch will save you there. The tail of the rope will zip through your device faster than even Niki Lauda could react. Always tie a stopper knot in the end of the rappel rope.

Using a prusik or klemheist back-up is a popular technique, but, frankly, it can introduce as many risks as it eliminates. What happens, for example, if your back-up tightens and you can’t get it loose or get unclipped from it? Releasing a knot while you are hanging from it is difficult. Overreliance on the back-up instead of learning how to properly use a rappel device is another concern. If you elect to use a back-up, always carry a spare. Then you can “jug” up or down the rope as needed. Practice this at home, close to the ground and live. Gear Guy has spoken!