Gear Guy: Should You Clip the Belay As Your First Lead Pro? 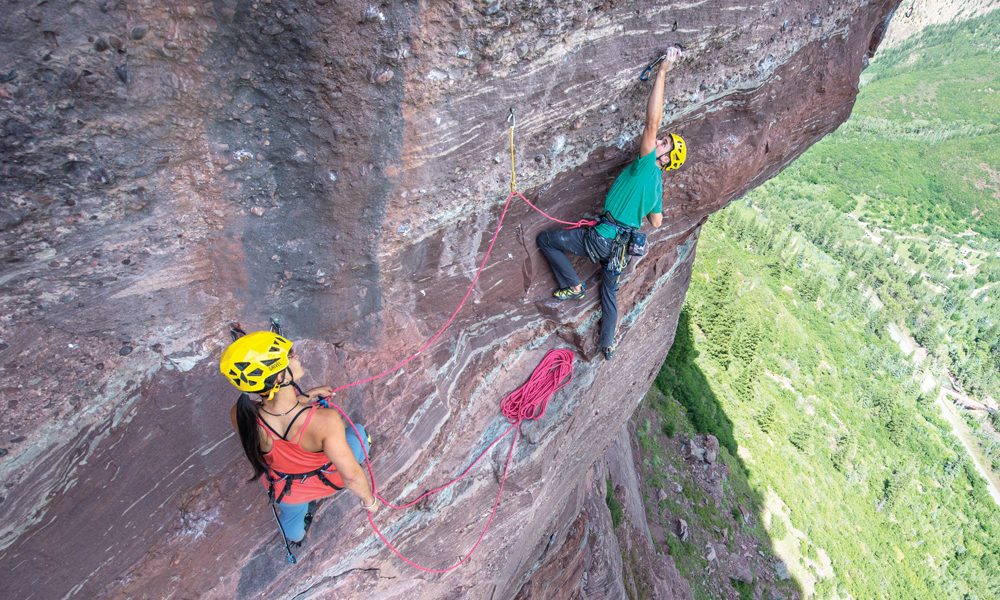 Should You Clip the Belay As Your First Lead Pro?

When multi-pitch climbing, I’ve always clipped through the anchor at the belay before starting to lead up the next pitch.

Recently, though, a guide friend told me not to do that, and said to place a piece as soon as possible after leaving the belay. He said that if the leader did happen to fall directly onto the belay anchor, it would double the force on it. So which is worse? Creating a factor-two fall (and what exactly is that?) by not clipping the anchor and falling directly onto the belayer, or clipping the anchor and doubling the force put on it?

Every situation is a little or a lot different, and is as complicated as gravity itself. But, just as you can be struck on the head by an apple falling from a tree, you can grasp the meaning of fall factor and the various belay scenarios.

The “fall factor” indicates the relative severity of a fall, rather than its force, although a high fall-factor will result in a high impact force. Fall severity is determined by the amount of rope available to catch a fall, relative to the distance of the fall. A 15-foot fall on 60 feet of rope is much less severe than a five-foot fall on 10 feet of rope, because in the former, the ratio of rope-to-fall distance is much greater—even though the fall is three times longer, there’s six times more rope out.

Since fall severity depends on the amount of rope from belayer to climber, you are most likely to achieve a high fall factor at the start of a climb and when leading off from a belay station, although intuitively this is when you are likely to feel the safest.

To calculate fall factor, take the length of the fall and divide it by the amount of rope in play. A factor-two fall, the highest possible, is DEFCOM 5, and you encounter it only when you fall directly onto your belayer. Say, you don’t clip the belay, climb 20 feet above it, and then fall. You plunge 40 feet onto 20 feet of rope. Forty feet of fall divided by 20 feet of rope gives you a fall factor of two. While the math is happily simple, this is a situation to avoid because your rope is the primary load absorber, and in any factor-two fall there is a little rope to catch a lot of fall.

So, clip the lead rope through the belay as your first piece of pro, and use a stretchy nylon (not Dyneema) runner to reduce the potential load on that placement.

As you noted, clipping the belay reduces the fall factor. Let’s say that clipping the belay shortens your fall by five feet, which is probably a good guess. You fall 35 feet (instead of the 40) on 20 feet of rope. The fall factor is 1.75. This is still high, but much preferred to a factor-two fall. Another benefit to clipping the anchor is that the belayer will be lifted up as he catches the fall. The lifting action lengthens the time required to stop the fall. This softens the catch the same way a sport-climbing belayer might jump up to catch a falling leader. Being lifted up could, however, slam the belay device into a carabiner, causing it to malfunction. Tether the belayer so he can be lifted, but will always pull up short of the first clipped pro. Make sure your anchor is multi-directional.

Clipping the anchor will, as your friend correctly ascertained, increase the load on the placement due to the multiplying pulley effect. This is not a real concern, and is not double in any event. In theory, a falling climber generating an impact force of 1,000 pounds will require an opposing force of 1,000 pounds to stop him, making 2,000 pounds the total force the protection feels.

In reality, due to the friction of the rope running over the carabiner, the multiplied load is closer to 1.66, not two. I’d much prefer that to the consequences of a factor-two fall. Besides, all gear in the safety chain was engineered with the load-multiplying effect in mind, and our gear handles falls of this sort with the regularity of a morning constitutional.

Whether you clip the anchor’s master point or just one piece is another topic of debate. I prefer to clip just one point at the belay, usually the highest piece in line with the start of the next pitch. This reduces cluster frigging and confusion, and lowers the fall factor because that piece is always higher than the master point, decreasing the length of a potential fall.

If you instead clip the anchor’s master point, the argument goes that you will distribute the load across all of the anchor. Despite what the books say, even if you have “equalized” the anchor, one of the anchors will always get weighted more than the others due to a number of factors such as off-center loading. Also, if the belayer is hanging at the master-point, and the rope is clipped through the master-point, the fall factor will be very close to two. To reduce the fall factor, the belayer would need to stand or hang some distance below the master-point, a position that is often inconvenient at best, impossible at worst. Now, go about your business!