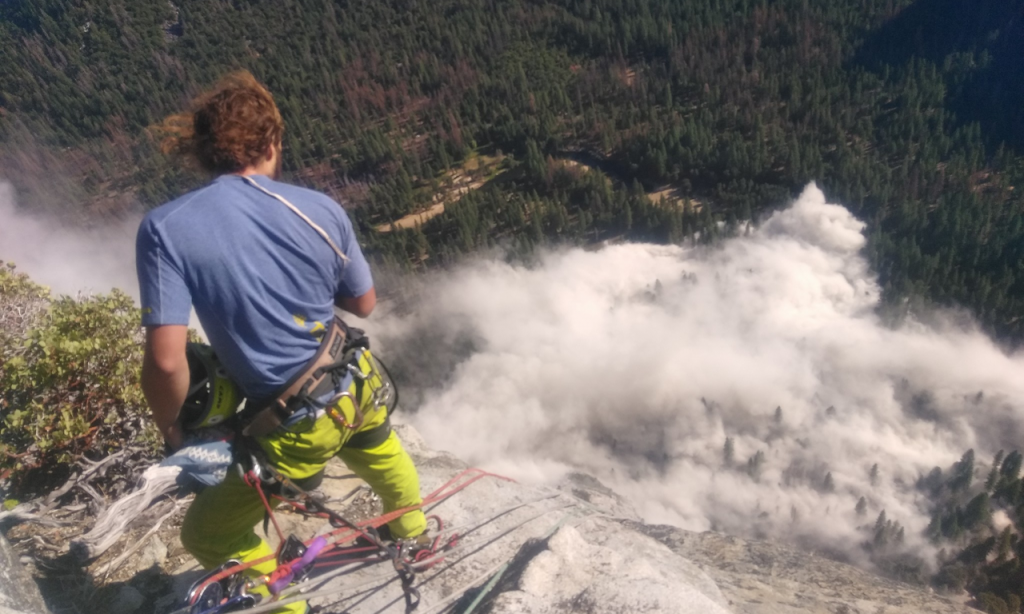 If I’m on a route and my leader yells “rock!” and there’s no good cover close should I look up to try to see where it’s coming from or just hug the rock and hope to Jeebus it misses?

Whaaa? You aren’t always looking up, paying attention to your climber’s every awesome move? Shameful!

And shame on me because I don’t look up all the time, either. I find that after about 10 minutes of belaying, my shoes suddenly become more visually interesting than anything that yo-yo on the rope could ever do.

So, when I hear “rock!,” I look up and hope to Jeebus that I can step out of the way, but that exposes your face instead of the top of your helmet, possibly setting you up for more cosmetic surgery than Michael Jackson and Phyllis Diller combined. Still, I look up to see what’s incoming, rather than just standing there and taking it, and the leader yells “rock” for that very reason.

Exception: If there is a natural shelter, I’ll scoot in there without looking up. In anticipation of falling rock or ice, establish your belay so you are out of the firing line. You may need to anchor in to prevent yourself from being dragged into the fray, but anchoring limits your mobility. Use your situational logic to decide where and how you should anchor yourself, factoring in the nature of the route (does it see a lot of traffic; is it known for being loose?), your leader’s savvy, and your own ability to protect yourself and still keep the leader on belay. And, wear a helmet!

Note, however, that you will never be actually safe. I’ve seen cannonball-sized chunks of ice ping down a route and blast the base a rope length away from where you’d think the thing would have impacted. Praying could help.

Ultimately, it is the climber’s responsibility to warn you, and if you get hit, it’s his fault. He should yell “rock” the instant he pulls off a loose piece, and not wait until the missile is halfway down the cliff. Additionally, the climber, on a loose route, should advise his belayer to be extra alert and yell down a warning in advance of grabbing a suspect hold. Rock! Gear Guy has spoken!

Feature Image: Looking down on the plume of dust and debris following rockfall off of El Capitan in September 2017. Photo: Pete Zabrok.