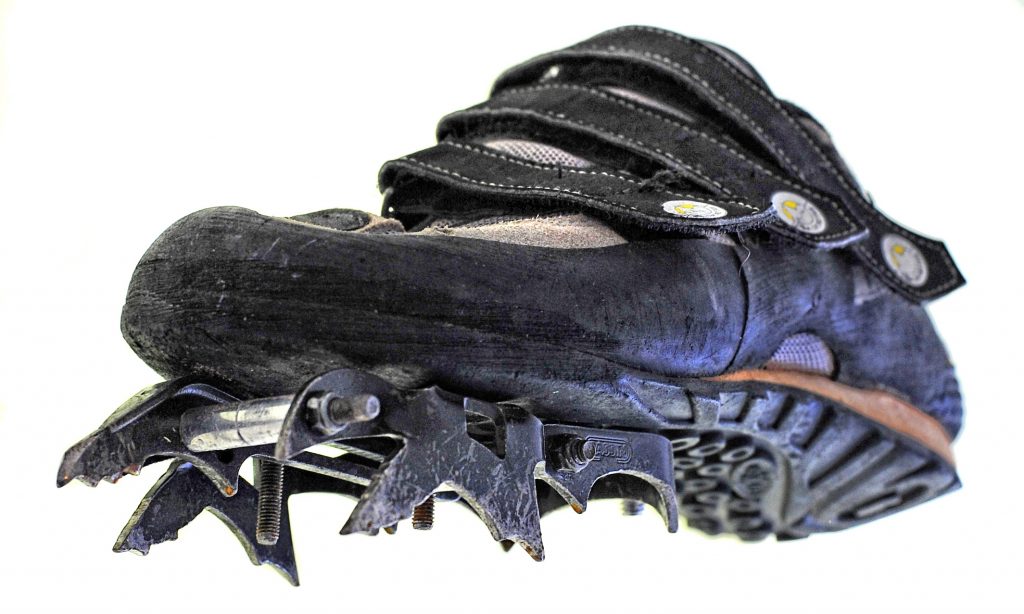 Do It Yourself Fruit Boots

Get your freak on! With a bit of craftiness, you can concoct your own fruit boots. I made a pair two seasons ago, and they rock. Here’s what you need, and how to do it.

Get a super stiff pair of rock shoes or light mountain boots. I used the La Sportiva Ventor (pictured here), a discontinued hybrid rock shoe with a hefty foam-cushioned heel, three Velcro straps and near boot-like stiffness under the front of the shoe. The rigidity is key: A soft shoe won’t hold a bolt-on crampon. The Ventor is ideal because of its stiff platform, mesh upper that dries quickly, velcro that lets you get them on and off in seconds, and a heel that works great for hooking.

Next, buy a bolt-on crampon. The Black Diamond Raptor ($170) is a good one and the most readily available.

Last, go to the hardware store and purchase pan-head allen bolts (plus nuts) that will fit through the crampon holes. Depending on the crampon and shoe, these will probably be 6 x 12 mm bolts. Be sure to use pan-head bolts. I used socket-head bolts and the bolt heads protrude. Sometimes the bolts feel like massage beads gently nuzzling on the bottoms of my feet ahh …, but usually they feel like Chinese throwing stars. This season, when I replace my beat crampons, I am switching to pan heads.

Place the crampon on the shoe sole and align it the way you want for climbing. I prefer the front mono-point in line with my big toe, rather than centered. Once you have the crampon where you want it, mark each bolt hole with a pen. Drill out the marks, align the crampon and bolt it on. With the Ventor, you have to drill all the way through the shoe upper to accommodate the allen wrench. If your shoe opens down through the toe you might be able to insert the wrench without drilling holes in the upper. No big deal either way.

I only attach the front crampon, preferring to leave the heel clean for hooking and resting on rock holds. Leaving off the heel crampon also keeps the shoes light and makes it less likely you’ll snag your clothes when figure-fouring. The downside to not having a heel crampon is that you could slip to your death while plodding up a snowy exit slope or kicking down the descent.

The above process takes about an hour, and when you are done you will have spent around $270 or less if you already had the shoes or boots. Besides saving money, this homemade fruit boot has rock-shoe-like performance. Disadvantages include zero insulation and less rigidity than a true boot. Minor points considering most modern mixed routes are short and largely (if not entirely) rock. For pure ice and long routes—where keeping your toes  on your feet and not in a jar are a consideration—you will still need to nut up and buy factory fruit boots. Next!