On Katahdin, the problems begin as soon as you leave the car. 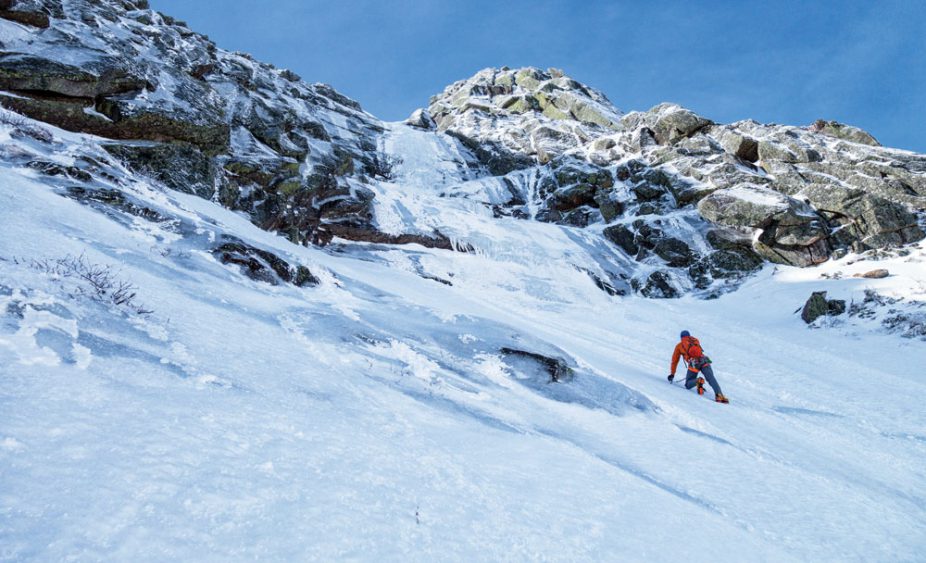 After everything we’d already been through here, one of us was going to drown. I could still hardly believe it would happen on an ice-climbing trip.

Dan stood thigh-deep in a 30-foot-wide stream, our final portage on the way to Katahdin. The stream, not even shown on our map, surged in a flash flood that covered an eroding bridge of ice—our only way across. To our left, the foaming, brown-tinted water flowed off the ice bridge, down a rock step and into a dark pool.

Gripping the nose of a pack sled, with Dan holding its other end, I had nearly reached the far side when he suddenly halted and shouted, “I’m stuck!” Our friend Jeremy looked on from the bank behind him.

If either of us fell into the stream, we could be tangled in the sled or our skis, or pinned by the current.

Dan released the sled. I surged forward to the bank and shoved the sled behind a spruce. Turning back, I saw Dan struggling to free his stuck ski. It detached and tumbled away in the loud, rushing water.

It was February, and for two days we’d labored up the mountain, feeling it would be worse to turn back and recross two other streams and a thawing lake. We were a little over a mile from the Chimney Pond cabin, our planned base camp.

Jeremy and I had been climbing partners for years, living in Massachusetts and climbing across New Hampshire, while I’d met Dan when I relocated to Washington, D.C., the previous summer. It was Jeremy’s third trip to Katahdin, and for Dan and me the first.

Katahdin, according to Rick Wilcox and S. Peter Lewis’s guidebook, An Ice Climber’s Guide to Northern New England, is “home to the longest, most serious alpine rock and ice climbs in the Northeast.” Wilcox would know: In the winter of 1974, he was called out to rescue six climbers pinned at the Pamola Ice Cliffs above Chimney Pond by 100 mph winds and in temperatures of -25 F. degrees. One climber, Tom Keddy, 26, froze to death, and Paul DiBello, 23, lost one foot, part of the other foot and a thumb to frostbite.

Historically, climbers have been tight-lipped about both their successes and mishaps on Katahdin, but accident reports reveal decades of misadventure. In 2000 alone there were 41 search-and-rescue efforts on Katahdin. Three of those accidents involved ice climbers in February. Long approaches and a remote setting ensure that any incident in the area is extremely serious.

I had seen sudden thaws cause streams to overflow, but never this late in winter. In New England, temperatures and precipitation can change so radically that rain can pool in drainages that have been frozen solid for weeks. The weight and warmth of the liquid fractures the ice beneath, and the continual flow pushes the loose ice. Eventually, the whole mess cascades downstream.

Dan eyed the water between his legs. Arriving at the stream, we’d attempted to cross in bare boots, but were forced to return to our skis when the ice began to erode.

“Are you going to get it?” I yelled, searching the water for the ski. I wanted him to say no. I was worn out. We were already wet, with hypothermia a big risk. At the same time, abandoning the ski was a bad idea. Booting uphill could take hours. It was below freezing, and the temperature was steadily dropping. It would be dark in three more hours.

The precipitation that caused the flash flood had caught us out the night before during the 16-mile ski in from the trailhead to Chimney Pond. Our positive forecast had deteriorated into a half-inch of rain.

The wet snow dragged on our skis. Jeremy’s boots were saturated and tore his feet apart to the point of bleeding.

As shivers had set in, doubts and uncertainty gnawed at me. I had thought about bivying under our sleds. Maybe we should return to the outhouse we’d passed an hour earlier. We could all three huddle in there, draped around the toilet.

Disoriented by the rain and wind, I had wondered where we were on the trail. But Jeremy knew that Roaring Brook, where several cabins were located, was somewhere ahead, so we had continued skiing into the night, finally reaching the cabins about 12 miles in. We recovered there overnight, and today had made it two and a half miles further, skirting or carrying our sleds over the other streams before being stopped by the biggest one yet.

Dan made a decision. He jumped into the pool, water splashing up his back.

“Holy shit!” Jeremy yelled from the opposite bank, eyes wide.

In a lucky break, the tip of the loose ski bobbed to the surface before it was carried away. Dan snatched it, surged back onto the ice shelf, and rocketed by me onto the bank.

I thought it had, but could do nothing about it. Jeremy crossed the stream to join us, and we skied furiously up the trail. An hour later, we reached shelter.

Morning found us perched high on the cliffs and dry in the golden sun, as if the events of the day before had never even happened. Belaying, I had time to reflect. I hadn’t expected us to be tested on the approach, and maybe that was the lesson. If they say a climb is only half done when you reach the summit, it also starts as soon as your boots touch the ground.

We finished our route and descended under a moonlit sky.

NATHAN OLSSON lives in Washington, D.C., and works as an editor and writer. He climbs rock and ice throughout the East, and hopes for a drier approach to Katahdin when he returns in February. 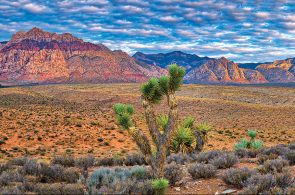 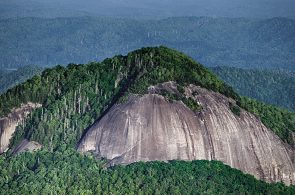 A Short Walk With Whillans

Black Canyon of the Gunnison, The Diagonal Epic