Hermann Buhl: Plaster Casts and a Hint of Spring
Epics +

Buhl recounts some ill-advised adventures in the hills that should be a lesson to us all: let your injuries heal before getting back out there!

Avalanches are not its only peril. It has even been known to dictate that I, in the shining springtime with the rocks already warm and dry, tempting one to the heights, stayed down in the valley or halfway up the slopes, strolling—or more correctly hobbling—about in the company of a pretty girl.

In February I had been for a last ski run. Once again I was up on the Seegrube above Innsbruck and the good snow conditions lured me into a little too much “cocky” overconfidence. The run was in marvelous condition and, in order to make the most of my time, I used the ski lift continually. No sooner was I at the top, than down again, schuss—a one-man ski race, in effect. As a result, I pulled a tendon in my knee. Plaster cast!

None the less, in the early spring I was back at the Höttinger Steinbruch trying out its practice climbs, even with a stiff, caged leg.

Two months later, just when the time had come for removing the plaster, I was running, as usual, up a staircase with long, bounding strides. I took three or four steps in one, slipped and came down—need I say?—on my bad foot. The plaster cast broke in two—I must say to my great satisfaction. I took the broken wreck off and went straight to hospital to report the mishap. The doctor wanted to put another cast on straight away, but I implored him not to. I promised to take the greatest care during the next few weeks. I did: I took the greatest care to get into training as quickly as possible.

The call of the high hills was irresistible. Innsbruck, after all, is ideally situated. All you have to do is to take the funicular and, an hour from its top station, you are at the Hafelekar, seven thousand feet above the valley level. I was there soon enough, but it no longer satisfied me; the Kemacher Ridge, a favorite springtime climb, was so seductively close at hand. I didn’t find walking very difficult, not even when breaking a trail in deep snow. So I went on, crossing several slopes covered with deep snow, wandering along the edge of huge cornices, ready to break away any moment. . . . Oh, I was back in my element!

I went on from the Kemacher—in such form, why not?—down the north ridge, a very jolly climb. I had almost forgotten my bad leg.

What about the Rainer Pinnacle—a most attractive scramble, which must surely be ready by now? I went down a gully and came to the foot of the pinnacle’s west arête. There was a small overhang there. Attractive scramble? No, a splendid bit of climbing. I went up on lovely warm rock. Up and again up; life was worth living! I was soon pulling myself over the edge of the roof and standing on the top of the slender pinnacle.

Short but often sheer pitches brought me back to the Kumpfkar Saddle. I was delighted both with the nice extension to my outing and with my splendid condition, so I followed the ridge on and over the Kumpfkarspitze to the Widdersberg. Here the ridge drops sharply, so I had to decide on a way down off it. I saw a most suitable snow gully, dug my heels in and went sliding down on the steep hard snow. I had forgotten all about bad legs and torn tendons. I felt as good as ever.

There was a sudden break in the snow, where the gully took a downward tilt, and a deep crack opened up in front of me. I was going too quickly to be able to put the brakes on, so I tried to clear it with a jump. I got over the gap with a broad leap of about fifteen feet. Then I felt a fearful pain, deep down in my knee.

My joint, which I had imagined quite fit again, had given way. Pain kept me lying in the snow for several minutes, and I only began very slowly to feel better. I hoped I hadn’t torn a tendon again, but at the same time feared that I had. I tried to continue my downward way, but found it a very difficult business. Face inwards to the snow, I kept on kicking steps for both feet with my sound leg, for there was no strength at all in the other. The gully steepened and snow gave way to rock. In the end, I got down to the ravine at the bottom, but that wasn’t the objective by a long way. I still had to cross the Kemacher Saddle back into the Seegrube and somehow or other to reach the funicular station. I gritted my teeth and forced myself on and up again; my knee was hurting terribly. It took me till sundown to reach the saddle and then I went limping on down the steep slopes to the funicular, only to find, to my utter disappointment, that the last car had gone down.

I went stumbling on down towards the valley. Gradually I got used to it. By the time I reached Innsbruck I hardly felt any ill effects of the mishap any more. In fact I felt so well that I even visited the club during the evening, to arrange a climb for the following Sunday.

All in vain, of course, for next morning I couldn’t get out of bed. The knee was hurting horribly again, so it was hospital once more. On went the plaster cast, hey presto! “Come back in two months,” said the doctor, calmly. What could I do but obey?

Everything in the Inn valley was already green. The meadows were starred with primroses and, a little further up, the crocuses were pushing up at the very rim of the last brownish shields of snow. Now only very few late skiers could be seen passing through the dry streets of the city: enthusiasts bent on seeking out the last of the winter snow. The boys were all barging about on football grounds. The still younger lads were to be seen at Totzenhacken—a round game and one of Innsbruck’s national sports—at which it is possible to pick up a penny or two. The deserted benches in the Hofgarten Park were glad to find regular visitors again. Lovers came to hold hands there. There was no denying it: spring was here!

My plastered leg only permitted me very moderate excursions into the lower hills—but it wasn’t a very harsh punishment. I had time to realize for once how lovely spring can be down in the valley, too; how delightful it is to stroll about among nature’s signs of reawakening. The sound of many waters gurgling again was like a benison. Everything was waking up, budding and blossoming; only the last remnants of grubby avalanche snow up in the gullies remained as a reminder of the cold season. Even if I glanced up occasionally with a pang of regret at the shining snow-peaks, I had to admit that it was very pleasant to wander through the pleasing landscape of the valley with a pretty girl by my side. And I realized that life has other pleasures in plenty to offer besides the joys of the hills.

A classic since its first publication in the 1950s, Nanga Parbat Pilgrimage is Hermann Buhl’s riveting first-person account of his development from a seemingly frail youngster who stole his stepmother’s clothesline so that he and his companion could wear it around their chests like “daring mountaineers,” to becoming that daring mountaineer in reality. His 41-hour solo ordeal in completing the first ascent of Nanga Parbat is the stuff of legend. In order to realize his dreams, Buhl dedicated himself to the art of climbing, toughening his spirit and strengthening his body so that he could endure the privations of serious mountaineering, but the man who comes across in these pages does not take himself too seriously; his joie de vivre sparkles as he tells of going AWOL from his army barracks to climb the Mauk West Wall or taking up ski racing on a whim. Like Ueli Steck half a century later, Buhl made speed climbs in the Alps, astonishing others in the mountaineering world with his accomplishments. 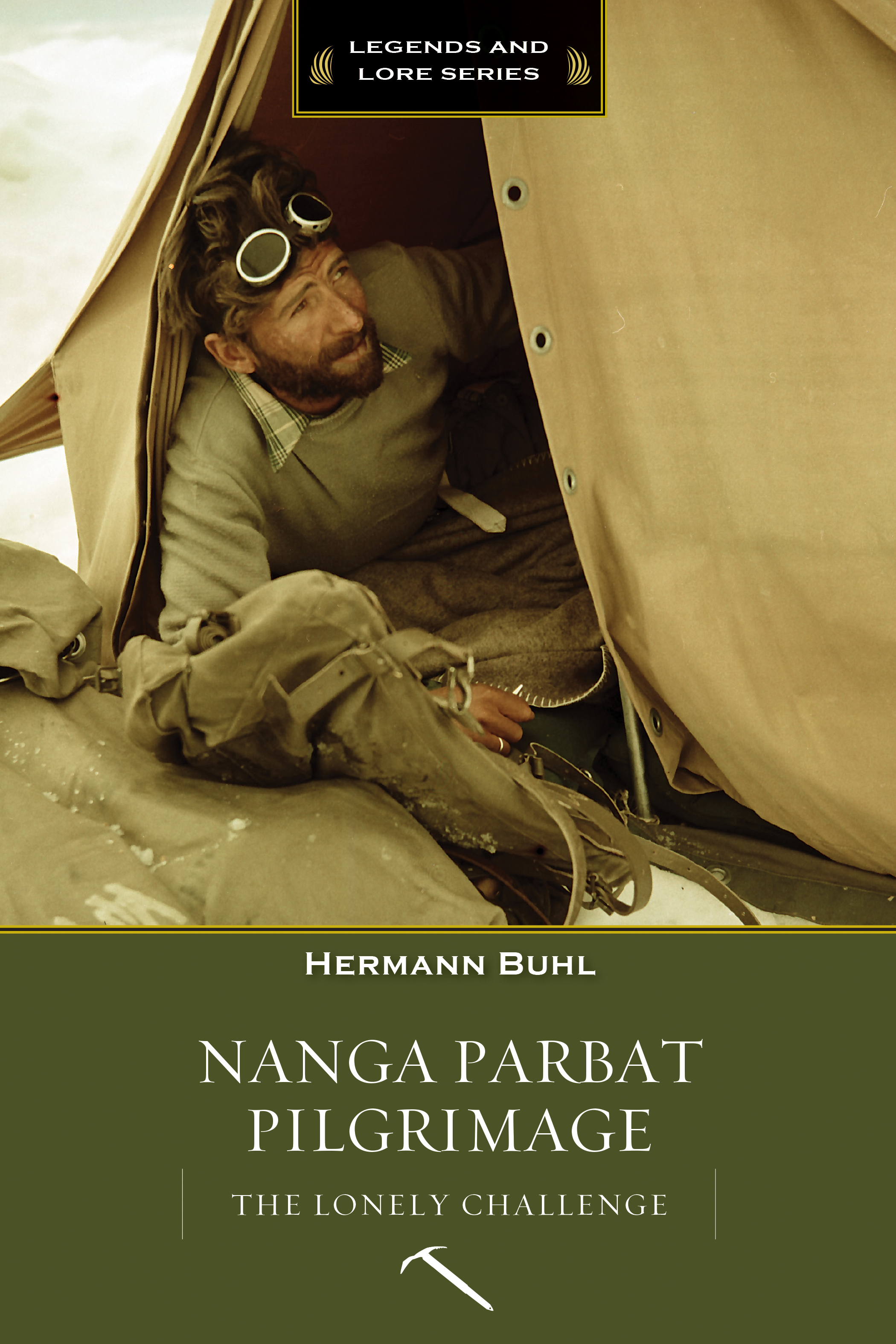 Hermann Buhl, born in Austria, was one of the premier climbers of his time. He made first ascents on two 8,000-meter peaks, Nanga Parbat and Broad Peak, the latter with a small team and no porters. He died while descending Chogolisa in 1957. 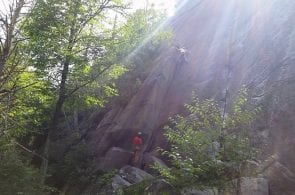 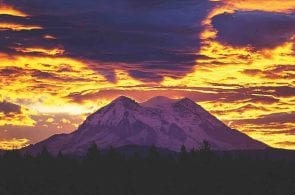 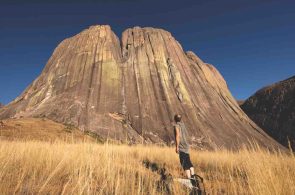 Hanging By A Thread