The Best Dam Climb in America - Rock and Ice
Destinations + 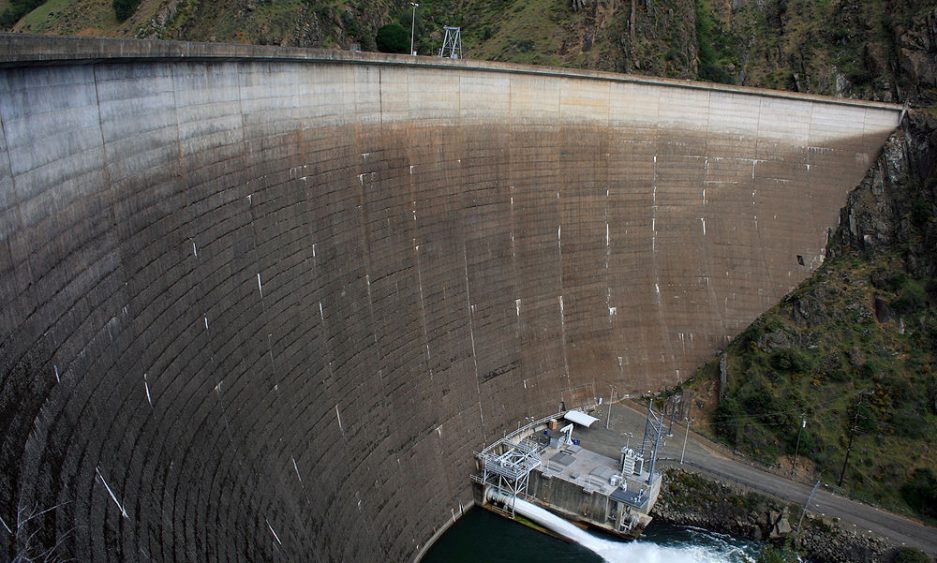 Too tempting to ignore: the Monticello Dam, Napa County, California, near the university where the author was trying to stay enrolled. Photo: Gh5046.

Boredom fosters stupidity. Which goes a long way in explaining why, in my junior year of college, my climbing buddies and I laid siege to the largest unclimbed wall in the county, a 300-foot high dam at the local recreation area.

The previous year, my partner Jeff Vance and I had given into temptation and dropped out of school to live in that holiest of rock-climbing meccas, Yosemite Valley. We had subsisted on a budget of $25/month, accomplished by a combination of bandit camping and a diet of macaroni and cheese plus breakfast pastries skillfully wooed from the kind-hearted waitresses at the Ahwahnee hotel.

Back in school at UC Davis, with any respectable climbing area at least two hours drive away, I found it imperative for my sanity to climb something, anything. Unfortunately, while attempting to satisfy this jones, I was arrested by the campus police four times, with the final apprehension leading to a visit to the chancellor’s office. The chancellor was a compassionate man and couldn’t find it in his heart to turn me out into the cold, cruel world.

“I just can’t kick an A student out of the university,” he said.

Realizing that it was a higher probability that lightning would strike twice before I gave up “buildering,” the chancellor allowed me to pick one structure on campus on which to get my fix. Unfortunately, even the multitude of problems on Kleiber Hall couldn’t slake my craving.

That was when my friend Mike Clark spied the concrete dam on a geology class field trip. “This thing is just begging to be climbed,” he said.

It wasn’t hard to recruit the third member of the team. Jeff, besides being my partner in crime in the previous year’s Yosemite adventure, was already trying to ruin my college career by tempting me out of my study sessions and into nighttime raids on university edifices.

I had taken a relatively light course load that included Ancient Roman History, a critical decision since the only time when Mike and Jeff were both free was Wednesday afternoon, smack dab in the middle of Rome’s greatest hits. Luckily, that history hadn’t changed in recent years. Armed with a set of class notes from the last time the course was given, I made Wednesdays into a big, beautiful hole in my schedule.

Our first reconnaissance of the wall proved promising. First off, the concrete had been held in place by forms made of wood 1×6’s which, because they weren’t completely flush with each other, offered edges ranging in width from a few millimeters to a quarter inch. Second, the angle of the dam at the bottom was only about 60 degrees, like Glacier Point Apron, a Yosemite haunt. Last, although the dam was crackless, we could drill quarter-inch bolts in the concrete. Unfortunately, it took about 15 minutes to make the one-and-a-quarter-inch-deep hole.

You might think that drilling holes in a structure holding back billions of gallons of water was ill-advised. And such an act would certainly be frowned upon by the local constabulary. But the thing looked climbable and we lacked common sense.

So, armed with hammer and drill, Jeff, our best face climber, began our adventure. Aiming for a maintenance window about 30 feet up, he made a couple of dicey friction moves, fired in a bolt, then high stepped and manteled onto the 3-by-3-inch ledge. We called it a belay. Pitch 1 was 30 feet and 5.9. Not a bad first day.

I drew the short straw for our next effort, which started with a 5.10 friction traverse right, heading for a good-looking edge and groove about 15 feet up. Desperately smearing on the glass-smooth concrete, I clawed my way onto an edge only big enough for my right foot, my left foot lying useless on the slab, and tried to calm down enough to contemplate drilling a bolt.

Letting go with my left handhold, I grasped the drill and held it to the wall. After putting the drill back in the holder, I regained my left handhold, then released my right handhold and gingerly slipped the hammer out of the holster. After establishing that I could hold the drill and hammer separately, I knew I needed to hold both of them together at the same time. I released my handholds and quickly grabbed the hammer and drill, then just as quickly put them back in their respective holders and re-grasped the rock—well, concrete.

Now, for the moment of truth. I could hold both but, could I actually drill a bolt? Oh, what I would have given for a left foothold, but self-pity had yet to make anything of the sort appear, so I just had to suck it up and start to drill. Sewing-machine leg is common in climbing. But when you only have one foothold …

I kept hammering, hoping to stay put, but I shook off the foothold and took the big ride, a 20-foot fall. I really wanted to come down, but was pissed and with all the adrenaline flowing, swarmed back up the moves and banged in the bolt. That foothold left a bruise on the ball of my foot that lasted over a month.

With the first crux under our belts, the climbing fell into a pretty standard routine of high stepping on the odd edge and then suppressing our nerves and steeling ourselves enough to slam in a bolt. With our confidence soaring we got almost a third of the way up the wall, 100 feet off the ground with six bolts, in the next four days.

But the wall above was steepening, and our next several efforts saw us taking 20-foot whippers while vainly searching for either a place to drill or something to afford upward progress.

Our confidence began a downward slide, and then, on one attempt, we encountered a three-foot diamondback rattlesnake coveting the base of our route. That was enough of an omen to put paid our efforts on that day. Things were looking grim, but we were still hopeful lads and far from giving up.

On what turned out to be our last attempt, I greased off our previous high point and while shaking out at the top bolt heard a voice from above. I looked up 200 feet into the faces of three maintenance workers who were, most likely, just as startled as I.

“Stay there! The police are on the way!” they claimed.

As I prepared to beat a hasty retreat I noticed that all our falls had reduced the integrity of the bolt to a level just above that of Richard Nixon’s, who had been booted out of office a few years earlier. In world-record time I drilled a second bolt, clipped in to rappel, and then plucked the first bolt out with my fingers. We ran down the trail, jumped in my VW and pulled out howling and hooting with the joy of giving the slip to the long arm of the law.

So, it was a bit of a shock when about three days later the chancellor phoned me and requested a meeting. Our meeting was short and to the point, as he recounted a query from the local authorities concerning some people who were trying to climb the dam at the local recreation area. You don’t get to be the head honcho of a major university by swimming at the shallow end of the gene pool, and when he put two and two together, we were busted.

But you also don’t get to be chancellor without realizing that students will be students, and he offered us a way to deal ourselves out of the police blotter. If we would just go up and remove the bolts, nobody would press charges.

So, with mixed emotions (we really were getting nowhere fast on the route lately) I re-climbed to our high point and yanked all the bolts. Well, maybe not all the bolts. We were, after all, climbers. A sharp eye might just be able to see one small dot, about 100 feet up. The laws of gravity are always strictly enforced, but sometimes in dealing with the local authorities you get a break.

Bruce Hildenbrand of Mountain View, California, has been climbing for almost 50 years, cutting his teeth on the soaring granite of Yosemite. His works have appeared in Rock and Ice, Climbing and Outside magazines. Maybe in an attempt to replace some of the funds in his karma bank from this adventure, he spends a lot of time on the rock replacing aging bolts for the ASCA and the Friends of Pinnacles (National Park).

The Labyrinth of Strange – Columbia, California