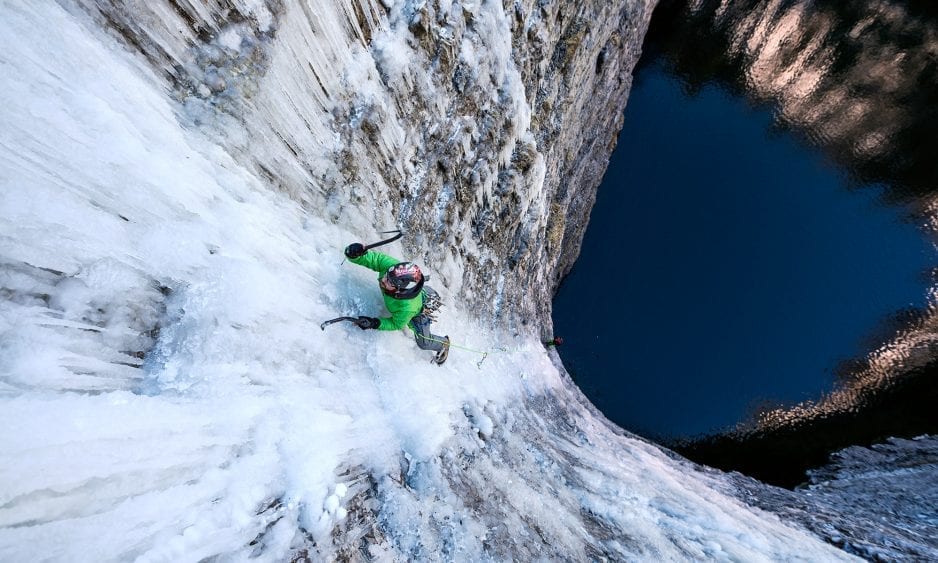 “Gone Tomorrow,” the film about Kentucky ice climbing, is now online, available to rent on Vimeo on Demand. This is the full version, only shown at screening events, with extra footage not shown in the film festival cut (plus a deleted scene!).

It’s still dark out, early in the morning on a chilly day in late January. I hold my thermos of coffee close for warmth while sitting in my truck, idling in the Lowes parking lot on the east side of Lexington, Kentucky. It’s the local carpool spot we all meet at before heading into the Red River Gorge for a day of cragging.

Today is a little different though. My in-dash thermometer reads 13 degrees fahrenheit, and for the last six days it’s been below freezing. So instead of packing a stick clip and quickdraws, we’ve got crampons and one set of ice tools to share between the three of us. And as a filmmaker, I plan on capturing every moment of the day’s rare adventure: climbing ice in Kentucky.

I started filming Kentucky ice climbing in 2016, thinking that it might make for a fun personal project at best. We only had one or two days on ice that season, but it was obvious to me right away that I was sitting on something special. Through the off-season I dreamed of what an ice season might be like if we had a proper winter, and against all odds the 2017-2018 season delivered, with two straight weeks of scouting, climbing and filming. Fast forward to 2019, and “Gone Tomorrow” has been accepted into about nine film festivals and had several private screenings. Not bad for a bunch of scoundrels running through the woods trying to scratch their tools on some frozen water.

While there are several prominent climbers featured in the film, the main character is really the ice itself. Chasing ice in Kentucky is kind of like the opposite of climbing in the Ouray Ice Park: you really have to want it, as some days you bushwhack for two hours just to climb 30 feet of dripping chandeliers. Some folks say it’s a novelty and they would be correct. The conditions to climb only seem to happen once every four or five years.

To be honest, though, the fact that Kentucky ice is fleeting and elusive is what makes it all the more exciting. The ephemeral nature and often sketchy condition of these elusive routes motivate us to climb them in conditions that are less than ideal, because we know that if we don’t climb them now, they might be gone tomorrow.

In the process of making the film, we discovered that we weren’t the first ones to try ice climbing in Kentucky. Turns out there were a few folks in the late 1970s who had really gotten after it during some all-time winters, and their stories and photos really added depth to the documentary.

The question we get asked the most about this film (second only to “How is ice climbing in Kentucky even possible?”) is where we go to find climbs. After all, we don’t have any mountains or high altitude walls. Below are a few of the more notable ice routes that we show in the film.

A classic Kentucky ice route if there ever was one, Horseshoe Falls is tucked in a corner, just a bit further down the trail from the popular sport climbing crag of Bruise Brothers in Muir Valley.

White Nose Syndrome was first done in 2018 and was not a typical pillar, but rather a rocky chimney that froze in the back and on the sides with ice, creating an icy chute that had the feel of a Rockies-style mixed climb. Kentucky native Heath Rowland, who pulled everything out of his bag of tricks to get the first ascent said, “It had the characteristics of classics like The Thrill is Gone in Hyalite or Skylight on Camp Bird Road. I was shoved into an ice chimney pounding pitons… in Kentucky?!”

The Abyss and Frigid Resonator

Another diamond in the rough are these two quarry routes, The Abyss and the Frigid Resonator. Climbing over open water is usually reserved for routes like HMR in Michigan, but we managed to make it happen here in the Bluegrass state.

Near Kentucky’s capital city, Frankfort, is surprisingly one of the better areas for ice. Much of that is thanks to the limestone bands that surround the Elkhorn Creek, which has the right mix of terrain and moisture. To get to these climbs, we took a sketchy paddle along the creek with all our gear. The most aesthetic route there is Desert Sunshine. It sees a lot of sun, yet forms up pretty consistently as these tiered columns, usually pouring with water down the middle.

As you can see, there’s no shortage of adventure out there waiting for us during a cold snap. And that’s the core theme of the film: finding adventure in your backyard. Ice climbing in Kentucky was born from this ethos! You don’t need mountains have an adventure, you just need something to get psyched on.

If you want to learn more about “Gone Tomorrow: The Story of Kentucky Ice Climbing,” check out kyicefilm.com for details on festivals, screenings, and when it will become available online.

“Gone Tomorrow” will be screening next at the Michigan Ice Fest on February 14, 2020. Interested in hosting a screening? Visit the film’s website for more info!

Op-Ed: The Man Who Carved the Mountain and Me

This is so rad and I am so excited to see the film at the Michigan Ice Fest next week!