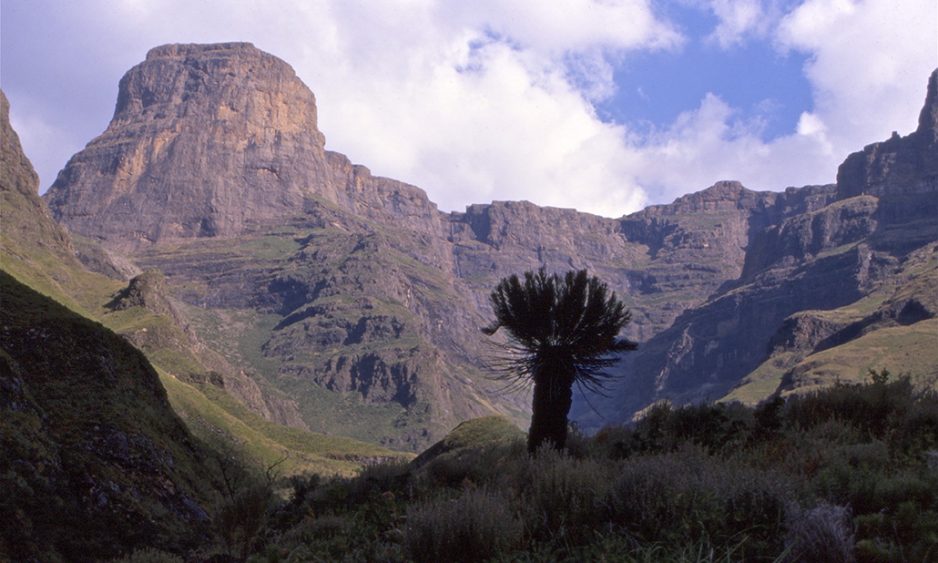 In “Forgotten First Ascents,” Owen Clarke is digging up cool climbs from the past and talking to the climbers who made them happen. This week: Not So Auto, Monk’s Cowl, South Africa, 2003.

Monk’s Cowl had been in the back of Peter Janschek’s mind his whole life. Growing up in South Africa, as a teenager he’d often go hiking in the rugged Drakensberg Mountains, a 250-kilometer north-south range which serves as a natural eastern border for the small nation of Lesotho. It was the first mountain range he’d ever seen, and during his trips there the 3,200-meter (10,500-foot) Monk’s Cowl spire was always looming overhead.

“For me it was something which was impossible,” he said. “It looked like you could never climb it.” So Janschek never tried.

He graduated high school, went to university, and moved away to climb abroad. He went to the Elbsandstein in East Germany, an uber-traditional mecca famous for its prohibition of chalk and metal protection (climbers use knots and slings instead). He climbed in Yosemite with icons like the Hubers, Timmy O’Neill and Dean Potter, bagging the second ascent of Freerider with Heinz Zak in 1998. He climbed in Patagonia, making the third ascent of Royal Flush with Zak on Fitz Roy.

Still, wherever he went, images of Monk’s Cowl’s north wall always lurked in the back of his mind. Finally, in 1999, Janschek returned to his South Africa to attempt it. He rope-soloed the established line on the back of Monk’s Cowl (three pitches of technical climbing and a lot of scrambling), and took a look at the north face from above. He wasn’t able to rap onto the face like he’d hoped, but it was enough. Now 29, with a decade of hard climbing around the world under his belt, Janschek knew that the rock face his 16-year-old mind had thought unclimbable was just another puzzle waiting to be deciphered.

He enlisted a friend, Ian Manson, and the pair began working the route in July 2000. The rock on Monk’s Cowl is volcanic basalt, “so it’s pretty uniform and it’s got friction,” said Janschek, “but generally the quality is not particularly good. It’s definitely not bomber Yosemite rock.” The team used traditional protection when possible, and placed bolts on lead when it wasn’t. “It’s an acquired taste, that rock,” said Janschek. “But the appeal for me was this was my home mountain range, I had to do something here.”

The line up the blank slab was far from obvious, requiring a lot of route-finding. “It took creativity, which ate a lot of time,” said Janschek. Four pitches of initial slab led into a dihedral, with an extremely steep crux (5.12b) on the sixth pitch. This pitch contained a bit of everything: some dihedrals, some face climbing, some cracks.

It wasn’t just the rock they had to worry about, though. The approach to the Cowl takes around six hours of solid hiking through the remote Drakensberg wilderness, as wild a range as any he has encountered. “You always run into snakes,” Janschek said. “Puff adders, berg adders, rinkhals cobras. Luckily, he avoided any bites, but ran into one or two snakes on every trip. On one occasion, one of Janschek’s friends was bitten by a puff adder, but miraculously, the venomous viper’s fangs stuck in the plastic cap on the heel of his running shoe, saving him. The wildest encounter with fauna came on the wall, though. On the crux pitch, a troop of baboons came running up the face, climbing alongside the two men on 5.10 to 5.11 terrain. “They made laughing stock out of us,” said Janschek, chuckling.

Pressing on, Janschek and Manson made slow progress upward. Running low on bolts and time they retreated at pitch 9. They stashed gear in a shelter at the base of the wall and planned to return soon.

Life got away from them, however, and it wasn’t until April 2003, three years later, that Janschek could return, this time with another friend, Tom Mackenzie. Unfortunately, they were pushed back by a series of ferocious storms, lightning bolts striking the rock directly above them. They stashed the gear again, left, and returned to the Cowl at the end of the month.

Third time was the charm. The men climbed to Janschek and Manson’s previous high point at pitch 9, pushed up one more pitch and bivvied, then spent the next day navigating a series of bulging prows up five more pitches to the summit of Monk’s Cowl. In total, about 60 percent of the route was bolted, the rest protected with pitons and other pro. They christened the line Not So Auto, a name Janschek’s first partner, Manson, had come up with after listening to the R.E.M. album “Automatic for the People.”

“He said, ‘Yeah, this route is definitely not so automatic,’” Janschek said, laughing, “and that’s why we gave it the name.”

Things have changed a lot since the 1990s and 2000s, when Janschek was making first ascents like Not So Auto. Instant weather scans, online trip reports, satellite imagery—all these things have made projecting new lines in remote places easier. Still, Janschek doesn’t see modern climbers as any less intrepid than the pioneers before them.

“I would have loved to be a professional climber, but we didn’t have a stage back then,” he said. “Now social media makes it easy for anyone to share what they’re doing, get sponsored, get a following. At the end of the day you still have to be creative, though. You have to have an idea and you still have to go out there and do it. It doesn’t change anything. The modern era and the people who are doing things nowadays, hats off to them. They are also pioneering.”

Bolting is now banned in the Drakensberg, so Janschek feels unsure if any new first ascents can be put up in the region. “This style of route isn’t really possible without some bolts, you can’t get any decent gear up,” he said.

Not So Auto, however, remains. It has only one confirmed repeat.