Back to the Future: Modern developments in Tasmanian Climbing
Destinations +

Back to the Future: Modern developments in Tasmanian Climbing

The following is an excerpt from Adventures at the Edge of the World, a new 540-page coffee table book telling the epic story of Tasmanian climbing from 1914 to the present day.

On the grimmest, darkest cliff in Tasmania, an epic drama is unfolding. It’s 2010 on the western escarpment of Ben Lomond and American climber Niels Tietze and John Fischer (Crazy John) are attempting a ground-up first ascent on the 200m face of Africa. The rock is questionable and the gear is sketchy but Niels launches boldly into unknown territory. Suddenly his handhold breaks. Out of control he starts cartwheeling down the cliff, gear ripping in rapid succession. He flies headfirst past John on the belay and after a 50m fall, his imminent demise is arrested by a lone, sharp flake which hooks the rope, stripping its sheath for several meters and averting a factor-two fall onto the belay that would have killed them both. Now hanging 15m off the deck, amazingly Niels escapes serious injury, except for the mass of ripped gear which slingshots down the rope and whacks him in the balls.

Niels and John were climbing in the finest traditional style, ground-up with no pre-inspection, cleaning or rehearsal of moves. They were attempting to force a super-direct variant of Kilimanjaro (25/5.12a), a route put up by John and me only months before. We had ourselves sought to establish Kilimanjaro ground-up and onsight, only to be shut down by a blank section with atrocious gear. Some cleaning revealed a no.2 RP and triple-zero cam and, after rehearsing it on top-rope, John was able to lead the crux pitch the next day.

For the next seven years, I embarked on a mission to tackle some of the biggest, scariest faces on Ben Lomond. These dark, south facing crags had seen some action in the `70s and `80s where most of the big crack-lines were done, but no one had dared to venture onto the faces. Fused cracks and intermittent seams lead the unfortunate climber into no-man’s land and the prospect of a Niels-like screamer. Despite being three hours walk from the road, we lugged hundreds of metres of static rope up the hill, several racks of gear, and set up a base camp for an extended stay. The result was climbs such as Brave New World (23/5.11c), Falling off the Edge of the World (23/5.11c), and Surmounting Terror (24/5.11d), names which sum up the experience of those routes.

The best route I put up at Africa was the R.J McMahon Memorial Route (24/5.11d), the crux of which involves a grade-24 move 10m above a small wire. It was the greatest traditional route of my life. But is it really a traditional route? Certainly in terms of the traditional protection, but the tactics signaled a new approach to traditional (trad) climbing influenced by sport climbing.

Scared shitless by Niels 50m screamer, and to avoid a similar fate, I adopted sport climbing tactics. Loose rocks were trundled, moss scrubbed, gear placements inspected and moves rehearsed on top-rope. The route was eventually led, placing traditional gear on lead and typically facing big falls, a practice known as headpointing. Yes I would have fallen 20m from the crux, but that was unlikely. The lead was academic in the end, a well-rehearsed routine on clean rock, with the gear placements ticked up and racked in order on the harness. My sport climbing skills transferred over to make these scary trad climbs possible.

In the 2000s, the developments in Tasmanian climbing have been a bit like the 1985 movie, Back to the Future. Marty McFly, a typical American teenager of the `80s, is accidentally sent back to 1955 in a time machine invented by a mad scientist. During his trip back in time, Marty must make certain his teenage parents-to-be meet and fall in love, so he can get back to the future, otherwise he will cease to exist. The phrase “Back to the Future” has been popularized in modern culture to mean something from the past, which has been recycled in the present but packaged as though it were something new.

The new wave of difficult trad routes on Ben Lomond is a case of Back to the Future, of looking back with nostalgia to the good old days of adventure climbing on big cliffs, but using modern tactics and gear so you don’t kill yourself. From a broad perspective, this has been the dominant theme of Tasmanian climbing development since 2000; people yearning for adventure like the climbers of yester-year, and using modern technology and approaches to put up brilliant, often difficult routes, in wild locations.

For those that have been in the game for a long time and can go back in the time machine of their mind and remember the good old days, it is a healthy thing to go Back to the Future and apply the lessons of history past. The current state of the scene is the product of the climbing community’s response to new ideas, attitudes, equipment and ethics over the decades. The best outcome from observing history is for people to change, identify their limitations and prejudices, and correct and improve themselves. But if we are to continue having adventures at the edge of the world we must be open to further change, even if it means restricting bolting development in order to continue having access to certain crags. For some, this might mean selling the drill and dusting off the R.P’s out of the bottom of the gear cupboard.

Speaking of the future, young Tassie trad-master Simon Bischoff, has this to say:

“The most impressive new routes in Tassie in the past few years have been done in the wilderness but the surface is barely getting scratched. The future lies in the wilderness which Tassie has in spades and is the major point of difference with the rest of Australia. The future is bright.”

Simon himself is practicing what he preaches, making history at remote crags, and pointing the way to future possibilities in our wilderness. In November 2018, Simon made the first ascent of The Hour Glass (30//5.13c), the hardest trad climb in the state. The route is virtually holdless and climbs a stunning line up an overhanging blank corner high on the Gonk. With complex technical movement protected by tiny wires and in a remote location, it is the ultimate expression of back to the future.

One of the most poignant examples of adventure climbing in the modern era is Bischoff’s free climb of the Impossible Dream (22/5.11a), on the remote Mt Razorback on Flinders Island. Mt Razorback sits like a massive, jagged, extracted wisdom tooth on a ridge high on the Strzelecki range and dominates the landscape at the southern end of the island. It looks like a climber’s dream, but it needed a dreamer and an explorer to realize it. Stuart Willis from Victoria pioneered rock climbing on Flinders Island in the mid-70s and took up the challenge. He fought his way for hours through a wall of prickly, harsh coastal scrub to Mt Razorback, carrying his climbing gear in case he discovered something worthwhile. He found a stunning 45m crack, one of the best lines in Tasmania, and aided the first ascent. Willis describes his ascent of the Impossible Dream:

“On Mt Razorback is a crack that is begging to go free. I did it on aid and abseiled off leaving several tubes as anchors. I called it the Impossible Dream and had plans to return and make a documentary film of the first free ascent. Probably a younger team will beat me to it as these days my accumulated injuries are catching up with me.”

The name says it all. What seemed impossible to Stuart 30 years ago has now become a reality. In 2017, Bischoff and Larissa Naismith endured the horrendous four-hour scrub-bash to Mt Razorback and led the Impossible Dream. Stuart Willis embodied the true spirit of climbing and Simon followed in his footsteps—dreamers across the generations seeking new adventures at the edge of the world.

Excerpted with permission from Adventures at the Edge of the World by Gerry Narkowicz and Simon Bischoff. 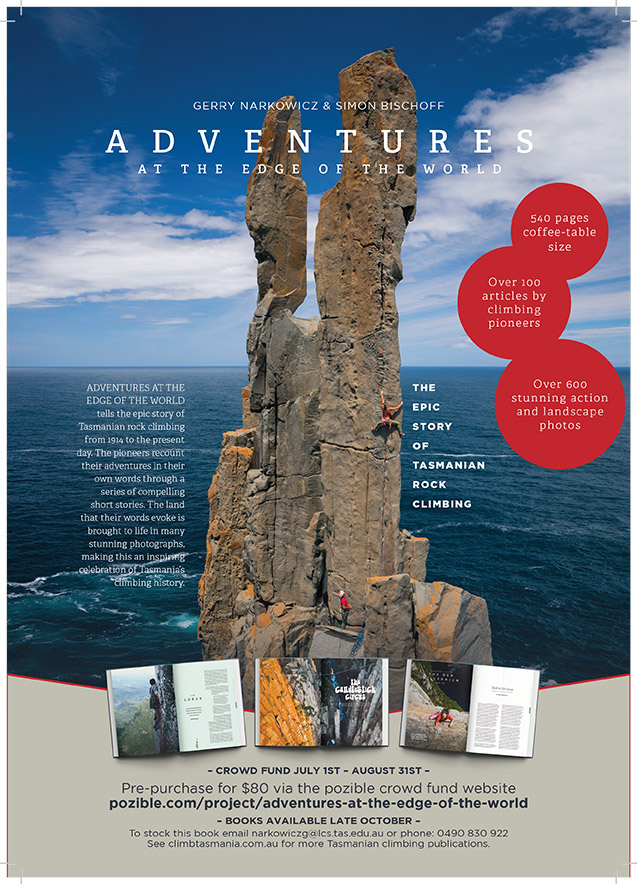 Pre-order a copy of Adventures at the Edge of the World today!