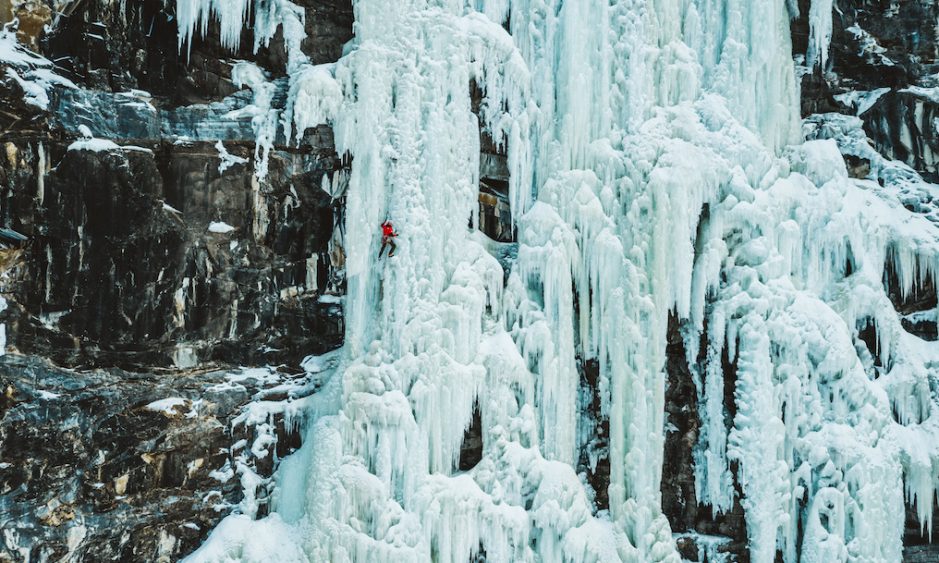 One of the classic ice lines in northern Norway: Flågbekken, near the town of Tennevoll. This flow is just 5 minutes from the road. Photo: Mathis Dumas.

Norway has been on the map for ice climbers since at least the late 1970s, when Hot Henry Barber went to see what frozen goods lay in the land of the Vikings. Suffice to say he found some big stuff. Since then, other areas, like Rjukan, have become ice climbing destinations.

Northern Norway on the other hand? Not particularly well known for its ice climbing. But after I visited the region for a week to experience the Arctic Ice Festival at the beginning of March one thing became clear: it should be.

In partnership with Petzl, German ice climbers Matthias Scherer, Tanja Schmttt and Heike Schmitt, along with local hotelier Tor Ivar Lyngmo, organized this year’s Arctic Ice Festival, in the Troms region. Lyngmo runs the Fjellkysten Guesthouse, out of which he has run a looser iteration of the Festival since 2010, but this was the first year with formalized workshops and professional support from Petzl and its athletes, including Scherer, Shmitt, Smitt, Jeff Mercier, Conrad Anker, Mathieu Maynadier, Philippe Batoux and Juho Knuuttila, among others. Says Lyngmo, “I’ve had the idea since we started to make the Festival a bigger thing, but I understood that I needed professionals to help out.”

The festival had an intimate and personal feel. Participants flew in from all over the globe. One couple even came from Australia. With 25 or so participants, everyone received highly personalized attention from the world-class ice climbers instructing them, whether they were beginners who had never donned a pair of crampons, or more seasoned ice climbers looking to refine their mixed climbing game with a dry-tooling wizard like Jeff Mercier.

The first couple of days were spent out at an ice crag perched above a lake in Tennevoll, the small municipality in which Fjellkysten Guesthouse lies. To the left of this crag is the impressive Flågbekken, a 150-meter WI 5 the likes of which most American climbers can only dream of: columns, curtains, petals, you name it, Flågbekken has it.

And Flågbekken is just the tip of the iceberg for Troms ice. After the first couple of days, participants split up into various groups, some larger and some just a couple of them with one guide, to tackle skill-level-specific objectives—all big and adventurous. Falls climbed included the aformentioned Flågbekken and the stunning 400-meter Rubbenbekken.

As Henry Barber discovered in the 1970s and Will Gadd did in the 2000s, the ice in Norway is big. Super fat and super tall. Christian Dramsdahl, author of the newly published guidebook Arctic Ice Climbing—the first stab at a comprehensive guide to the area—says, “What’s special about ice up here is there’s no sign of other people there—it’s virgin ice, you have to do all the work to get up the climb, nothing’s picked out. And it’s not crowded at all.”

Climbs range from WI-easy single pitch cragging, like Tennevoll; to several-hundred-meter-high WI 5 outings, like the area classic Skredbekken; to WI-terrifying columns and curtains for the world-class ice climbers out there, like the first ascent Ten Years Later, a stunning WI 6 M9 that Jeff Mercier established right after festival participants traveled home.

Nightly programming during the festival—usually post-sauna session!—consisted of presentations from the athletes and guides. Among the presentations: Conrad Anker shared tales of Antarctica first ascents; Jeff Mercier shared lessons and advice for how to stay safe in the mountains; Juho Knuutila gave a slideshow of his and Quentin Roberts’ strong attempt on the unclimbed North Pillar of Tengkangpoche in Nepal; Steve Swenson talked about his first ascent of Link Sar last year; and Scherer, Shmitt and Shmitt screened a film showing bold, cutting-edge ascents they did in Norway.

For those more inclined to ski touring, the festival also offered ample opportunity to sample the backcountry goods of Northern Norway. From perfect tree skiing, to shredding powder on bald mountain tops, to couloirs that go all the way down to the edges of the fjords they overlook, the skiing is world class. Steep skier extraordinaire and guide Vivian Bruchez, along with guide Johanna Smilla Stalnacke—who grew up in the nearby Laplands—led day trips throughout the area.

For those thinking of exploring northern Norway’s ice, either in next year’s edition of the festival, or on their own, be prepared for true arctic conditions. “Arctic storms up here, they have quite a bite,” Matthias Scherer says.

But that bite is worth it for the wealth of climbing, Scherer says. “What makes the north special is you have a lot of areas with a lot of climbs. There’s endless potential here.”

Check out some more shots from the 2020 Arctic Ice Festival below, and keep an eye out for a longer print feature on the ice in Northern Norway and the event in a Rock and Ice issue next fall!