Ryan Kautz, 26, falls to death while rappelling the last pitch of Prime Rib of Goat, a popular 11-pitch 5.9- on the 1,300-foot Goat Wall near Mazama, Washington. 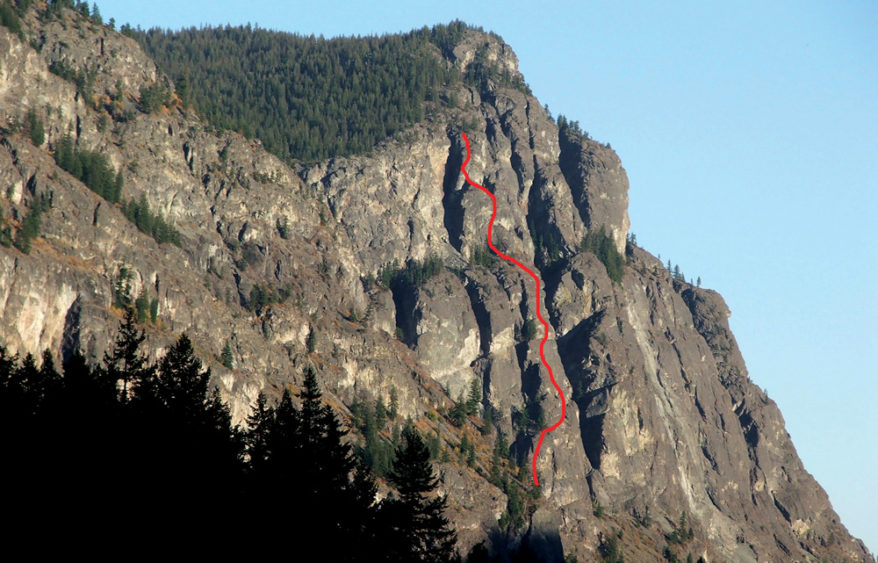 Prime Rib of Goat, an 11-pitch 5.9- near Mazama, Washington, was the scene of a fatal rappelling accident. Photo: Bryan Burdo.

At about 3:30 p.m. on May 3, Ryan Kautz, 26, stood at the top of the second pitch of Prime Rib of Goat, a popular 11-pitch 5.9- on the 1,300-foot Goat Wall near Mazama, Washington. Kautz passed one end of a new 70-meter 9.5-mm rope through a chain anchor and tied it into the end of another new rope—same length, diameter and brand. His partners, Keith Erps and Matt Jackson, from Seattle like Kautz, stood about 50 feet away on a big ledge waiting to make the last rappel. A storm was moving in and the team had decided to retreat from pitch eight before reaching the summit. Erps had rigged the previous rappels using a flat figure 8—a variation of the EDK, or flat overhand—backed up with an overhand, but Kautz wanted to set up the last rappel.

According to the Okanogan County sheriff’s report, Jackson watched as Kautz tested the rappel by pulling on it, then saw Kautz descend roughly 20 feet before something went wrong. Jackson and Erps heard a loud snap and saw Kautz fall roughly 100 feet, striking two ledges before disappearing into a gully. The two climbers heard screaming and a short time later saw Kautz crawling about 100 yards down the gully.

The rope was gone, and Jackson and Erps were stranded, so they shouted up to a local guide, Scott Johnston, who had passed them earlier, climbing with two clients. Johnston quickly descended and fixed a rope so that Jackson could rappel into the gully. By the time he reached Kautz, about an hour and a half had passed, and Kautz was dead.

Two Okanogan County search-and-rescue members, Ottis Buzzard and C.B. Thomas, recovered Kautz’s body about an hour after Jackson found it. Kautz was still attached to the rope and his rappel device was correctly threaded. Thomas carefully checked both ropes and found no damage. There were no knots in the ends of either rope.

“Ryan had told me he had never done a multipitch before,” Johnston wrote in an e-mail to Rock and Ice.

“That group was very inexperienced. It was obvious from their gear, the way they talked and the way they were climbing and belaying.”

Johnston went on to describe the most likely scenario for the accident.

“They had been using a flat figure 8 backed up with overhands all the way down the route. [Kautz] tied the same knot, no doubt, but didn’t back it up, or it would not have come untied. A flat overhand is the preferred knot for tying two ropes together for rappelling, but the figure 8 looks more substantial so it gets used, too. But a flat figure 8 can walk and unwrap itself when loaded. If the tails are too short, it can walk right off the ends of the rope.”

The flat overhand, or Euro Death Knot (EDK) as it’s paradoxically called by climbers, is commonly used to join two ropes, but the flat-8 variation is also popular. Note that both knots can “capsize,” or invert and roll, under weight, but while the figure-8 version with its extra bend might seem less likely to roll, it is actually more likely to roll out and untie itself than the overhand version. Recent tests by Kolin Powick at Black Diamond showed that the flat 8 capsizes at a much lower load than the overhand EDK, and that the smaller the rope diameter, the lower the load it takes to capsize the knot.

Incidentally, both men who recovered Kautz’s body commented on the slickness of the ropes. Buzzard wrote: “The dry coating on the ropes seemed to be extremely slippery. I tied them together with an EDK and pulled on it with my hands only and could make it walk and slip far more than I have seen any rope slip before.” Perhaps silicone-treated ropes, such as these, are easier to capsize than less slick cords? More testing needs to be done.

With any knot used to tie ropes together, leave at least two feet of tail and always tie a backup.

Letter to the Editors

I just finished reading your Accidents article in the current issue [237, October 2016]. It tore me open again and I want to take a moment to add a few things to the article, especially concerning some comments from Scott Johnston.

I want to take a moment to defend Ryan and clarify a few details. He was the best of us and spent several years as an outdoor educator rigging rappels and helping kids navigate a high ropes course. The exact knot that he tied is unknown. The ropes we used were Edelrid Eagle Light [9.5 mm, pro dry]. Each had only been used a handful of times. For the prior rappels, I had used a [flat] figure eight with two-foot tails and an overhand backup. The slickness of dry-treated ropes is something that needs to be examined. Finally, we had no ability to communicate. Ryan heard nothing while we were on the ledge due to noise caused by a large water runoff.

Scott’s comment that our system and equipment seemed “inexperienced” could be perceived as unsafe technique. Matt and Ryan were newer to multi-pitch climbing and as a result we were not using the most efficient system, but the system was designed with safety and teaching in mind. We were climbing on two independent ropes and belaying one climber at a time rather than simul-climbing. Ryan and Matt also preferred to use slings to clip in direct [to anchors] rather than clove hitches. I realize this could be perceived as inexperience, but these were the accommodations we used as Matt and Ryan became comfortable with multi-pitch climbing. Ryan had the experience necessary for the workload that he was given, as did Matt, and I have been doing this type of climbing for five years. We were well within our capacity, having a fun day with friends when an absolute tragedy occurred.

I appreciate Rock and Ice’s diligence with helping to identify accidents and how they could have been prevented. There is a huge community in the PNW that has been devastated by the loss of Ryan. He was an outdoor educator for youth and a huge personality in his community. He knew his skills and his limitations along with the risk involved in our sport, but he was eager to learn and improve his climbing. His legacy has been a scholarship that has raised thousands of dollars to help underprivileged youth engage in outdoor recreation programs.

I feel it is important to have all the details.