The most difficult 14’er in Colorado, Capitol Peak is a magnet for experienced and inexperienced climbers alike. When Brandon Wilhelm and Zackaria White took a “shortcut” on the descent, in the dark, the situation got away from them fast. 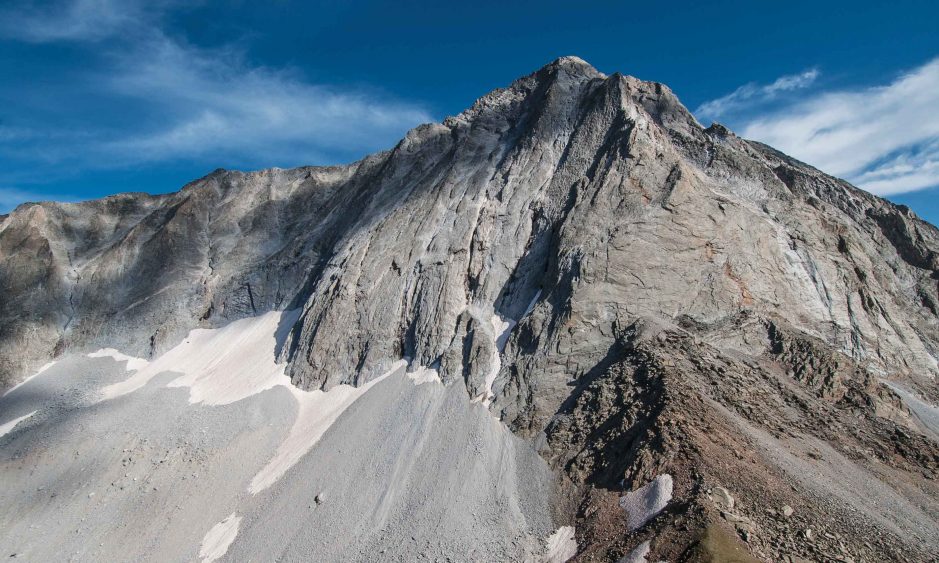 The left skyline ridge is the standard way up and down Capitol Peak, and from the perspective of the ridgeline the north face (in sun with the long shadow) appears a benign shortcut. It isn’t.

At nearly 14,000 feet on Capitol Peak, one of Colorado’s most difficult 14’ers, Brandon Wilhelm and Zackaria White started arguing. It was around 3:45 p.m. on August 26. By all accounts, the weather that Saturday was clear, Colorado-blue skies and no wind. An hour previous, they had stood on the summit, but now, exhausted and late in the day, White wanted to take a shortcut back to Capitol Lake, where they camped the night before.

White, 21, who had no previous climbing experience, was convinced he saw a more direct descent straight down a gully on the north face, which would avoid the talus-hopping, circuitous main trail. His partner, Wilhelm, who has climbed 42 Colorado 14’ers, disagreed. According to an interview with The Aspen Times, Wilhelm strongly advised White against descending the gully, saying that it cliffs out. White insisted on the shortcut. They parted ways just before the knife edge, and White continued down the gully.

Wilhelm took the main trail and got back to Capitol Lake around 7 p.m. In the waning light, he made extensive efforts to look for White, but couldn’t see anything. He went to sleep and called for a rescue early the next morning. White’s body was found around noon on Sunday below the cliff band. According to the Pitkin County Sheriff’s Office, his body “had injuries that were consistent with a fall from the cliff band above.”

Wilhelm and White started their day late on Saturday, waking up around 9 a.m. at Capitol Lake. To avoid afternoon thunderstorms and give ample time to descend, a good rule of thumb is to be off a Colorado summit by 11 a.m. It was 4 p.m., he was exhausted, had no headlamp, wore skateboarding shoes, and they were still high on the route. As an inexperienced climber, White sought a quicker descent route. He simply wanted to be down.

White thought he had found a more direct line down to Capitol Lake, but it is not a route. The gully he saw does indeed spill out right above the lake. However, while many mountains have more direct descent routes than the normal ones, it does not mean they are “shorter” or safer. Mountain experience veri es this time and time again. A technical descent of 500 vertical feet can take two or three times as long as a moderate three-mile hike. In the case of Capitol, the north gully seems doable from the knife ridge—an infamous section high up on the route—but slowly becomes steeper on chossy rock only to end on 500-foot cliff bands; the extent of the cliff bands down the north face is obvious from Capitol Lake. White’s decision to take the gully is the result of a lack of knowledge of safe mountain travel and situational awareness. Sadly, only four days prior, on August 22, the bodies of a young Aspen couple, Ryan Marcil, 26, and Carlin Brightwell, 27, were recovered below the north face. They died as a result of what was likely the same decision—attempting a direct route down the north face. If these individuals had stayed on trail, their accidents probably would have been prevented. However, the increasing number of deaths on North American mountains is indicative of the increasing popularity of climbing mountains, with more people probably either ignoring or not fully comprehending the risk.

Inexperienced hikers and climbers should only veer off-trail on a technical peak if they are sure the way is a descent route and they have the proper equipment to do so. For a 14’er, Capitol Peak is quite technical. As the Sheriff’s Office said, “If there was a safe shortcut, it would be the standard route.”

Trails on 14’ers often start out in a pine and aspen forest, become thinner as you climb, then peter out completely on loose talus fields near the summit. So, why not just have better trails on 14’ers and post signage in problem areas, such as the north face gully on Capitol?

Scott Fitzwilliams, Superviser of the White River National Forest, whose boundaries encompass Capitol Peak, says more signage isn’t the answer: (i) the signs would need to be regularly maintained, which is impossible in alpine talus fields and because of staffing shortages; (ii) you simply can’t locate every potential danger; and (iii) the wilderness experience would be compromised by increasing signage and other elements.

In terms of popularity, Mount Elbert, the tallest peak in the state, saw a 16 percent increase in traffic between 2015 and 2016, with 29,000 visitors in the latter year. The best prevention: “Education,” says Fitzwilliams. Knowing what a route entails, having food, water, proper gear, being fit enough, and building up to the more difficult peaks are the best ways to keep the increasing numbers of mountain climbers safe.

Skateboarding shoes? Sorry dude, Imma gonna solo, for your safety and mine. Sad case. As for remedies, how about a glance at a topo.

One glance at a topo would show the cliff band. But I would never hike with a sleepyhead in skate shoes, Safer alone. Sad case.