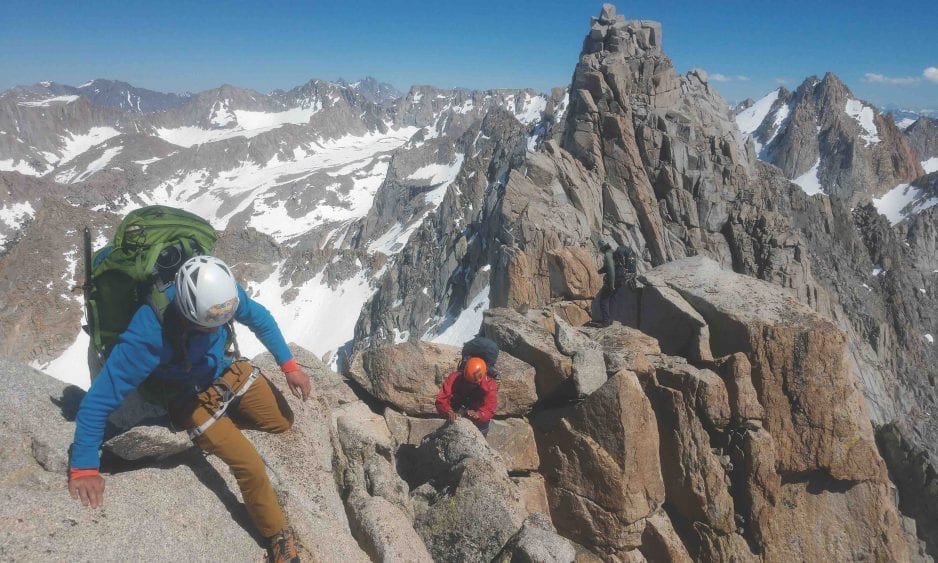 This photo of California’s Evolution Traverse was taken about 30 minutes before Sean Reedy, who snapped the pic, fell 60 feet after a piece of tat snapped while he was rappelling. Reedy is lucky to be alive. Photo: Sean Reedy.

This past June, Sean Reedy and his three partners set off on the Evolution Traverse, a classic grade VI in the High Sierras—thousands of feet of scrambling, technical climbing up to 5.9, many rappels, route finding, a 10-mile approach, nine peaks and plenty of time above 13,000 feet. Typically, it takes a few bivies to complete.

Reedy, of Gilroy, California, had been doing technical fifth-class ridge traverses throughout California for a few years and had, over the past 12 months, begun to trad climb, working up to 5.10 at various crags. In the middle of their third day on the traverse, the team stopped at a small section, where it appeared they needed to down climb or rappel. Reedy opted to make a short rap rather than down climb, as his partners didn’t feel down climbing with heavy packs would be safe.

The group had been encountering rap stations of tat along the way, each station with numerous slings. However, at this “station,” Reedy noticed just a single cordelette, strung around a horn, so he slung a hay-bale-sized boulder on flat ground in front of the horn with one of his own runners and belayed two climbers down. He then removed the new runner, and a third climber rapped off the old cord, but didn’t weight the rope fully. When it was his turn, Reedy used the same system as the third—he rapped using the old cord. After only a few feet, the cordelette snapped. Reedy fell 10 feet to a small gap, then tumbled another 40 to 50 feet. He suffered a neck fracture, among other injuries, and was eventually airlifted to safety. He is lucky to be alive.

This accident occurred because the single piece of cord was untested and not backed up. Reedy remembers that the tat “visibly looked bad.”

Over the previous two days, the party encountered numerous tat stations, as is common for such a route. Reedy and team rappelled off the stations they could, Reedy commenting later that “it was not our practice to back up the old tat we rapped off, as we generally found we could attach to undamaged-looking tat and yank on it without signs of weakness.”

After three days of on-the-go with heavy packs in an alpine environment, fatigue could have been a factor for Reedy in the decision-making process. He said he felt “foggy” prior to the accident. He doesn’t know why he just trusted the single piece of old cord, but he did.

Reedy doesn’t know if there had been a knot failure in the cordelette or whether it broke. Most likely, fibers in the cord were weakened from exposure and/or possible wear from previous uses.

There is no golden rule when you come across a nest of tat other than—don’t trust any anchor you didn’t build. And, of course, even then nothing is guaranteed.

Since always abiding by that rule is nearly impossible, we must accept that rappelling off a nest of slings, rusted pitons and old biners is part of climbing. Before you trust anything, you need to ask yourself a series of questions. Can I see the entirety of the anchor? Does the webbing look old and frayed? How is the coloring of the webbing? Do the fibers feel dry and stiff? Is it exposed to the sun? How badly do I need to trust this anchor? Can I afford to leave webbing or some gear in case it fails? Only by knowing the answers to these questions can you make a good decision. Also, it goes without saying that if you see questionable slings, perform the public service: cut them out and replace them.

Considering the anchor was just a single piece, Reedy should have backed it up with a runner, or he could have had the first two climbers, who were protected by the second-sling back up that was later removed, give it the good ol’ bounce test.

In theory, five crappy runners are stronger than one, but a single healthy sling can be stronger than five weather-beaten ones. On one romp in Tuolumne, I yanked on a suspect grouping of slings, and, with no large amount of effort, pulled all of them out; though they looked relatively new, they had been severed, maybe by rockfall, maybe chewed by rats, behind the block.

Inspecting the quality of tat is a skill that takes years to acquire, and you can never be too safe.

Francis Sanzaro is the Editor of Rock and Ice and can be found here.

Gear Guy: Are Sewn Slings Stronger Than Knotted Ones?