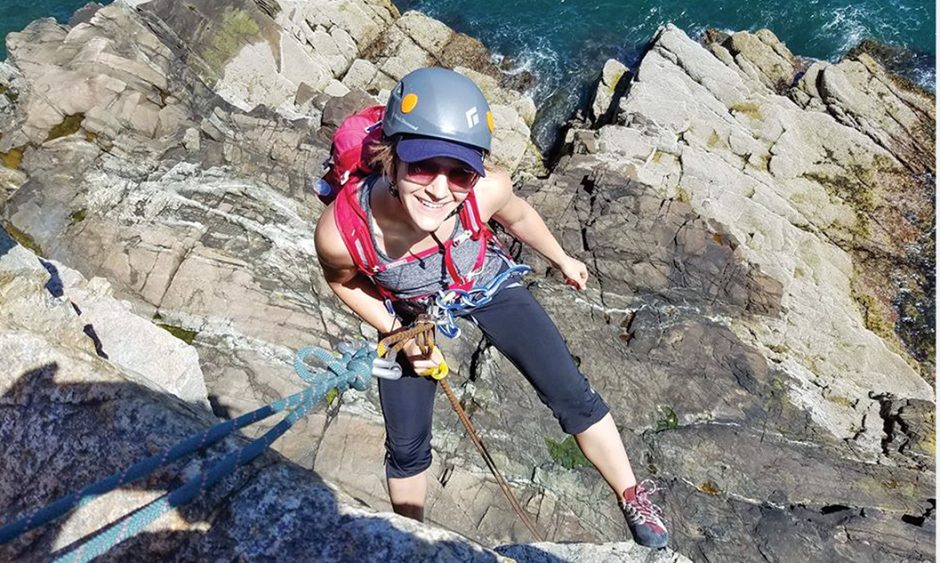 Lizzy Ragan rappelling to the base of Otter Cliffs at Acadia National Park, Maine. Ragan had 10 years of climbing experience before her accident at Echo Crag, New Hampshire, this past August. Photo: Ron Birk.

This past August, Lizzy Ragan, 27, of Somerville, Massachusetts, set out to climb Avalanche, a 60-foot 5.7 at Echo Crag, on the northeast side of Franconia Notch.

With a few dozen routes to its name, Echo Crag is a small outcropping surrounded by tall trees and residing above Echo Lake.

Avalanche is an off-vert trad climb that follows parallel cracks and seams. Lizzy had been climbing for 10 years, the last four outside, and had five trad leads under her belt, all in the 5.6 to 5.7 range. Lizzy top-roped Avalanche one time that day before pulling the rope and going for the lead.

Not far off the deck, she got in her first piece, a cam in a vertical crack. At around 10 to 15 feet, she found a good stance and was in the process of placing her second piece when her left foot slipped. Her first piece popped, she flipped upside down, and she hit the ground headfirst, breaking six vertebrae. Within four hours, she was in surgery at Dartmouth-Hitchcock Medical Center. Lizzy spent three months in the hospital and is currently in rehab. Her type of injury has a high mortality rate and she is lucky to be alive.

Lizzy was up and a few feet right of her first piece when she fell, generating a small swing. When her first piece popped, she kept falling sideways and hit the ground headfirst. She hit the wooden stairs below the route as well, which complicated her trajectory.

“If I hadn’t placed the first piece, I would have just broken a leg,” Lizzy said. She might be correct. Of course, the precise trajectory of a fall is hard to predict.

This accident occurred because her first piece pulled, but most accidents begin before they occur. This accident started when the first placement was a tad rushed.

“It wasn’t perfect,” Lizzy said of her first cam, cognizant that it should have been better, but she was getting a little pumped and opted to push on. The crack that held her first cam was “a flared crack, and tricky,” Lizzy recounted. At the time of her fall, while trying to get a second piece, Lizzy “did not feel insecure at the stance,” she says, but her left foot slipped.

The accident is the result of four factors—being a bit pumped while placing the first cam, the poor placement of the cam, the swing potential, and her body position at the stance while placing her second piece.

When placing gear on trad climbs, especially if you are relatively new to the genre, you need to make absolutely sure you are in a spot where you feel solid, so you can get in bomber gear without rushing. Three serious accidents occured in the past year—all reported here—because the climber felt rushed, placed inadequate gear and the gear ripped when the person fell.

When placing gear, either at a stance or an anchor, be sure you can hang out for a while. This imperative eases as you become a seasoned trad climber, since you can quickly spot the placements and gear sizes. But for the rest, give yourself ample time to eye the potential piece, fiddle with it, and ensure that it can hold a small car, which most gear should be able to do.

In most trad scenarios, if you think a piece isn’t good, it likely isn’t. You then need to recalculate how dangerous a position you would be in if that piece didn’t exist. Typically, you’re in a bad position. If you find yourself climbing above a bad gear, get something good in ASAP, and do not wait until the normal eight to 10 feet. Sew it up.

Knowing exactly when a foot is going to pop is nearly impossible, but the awareness that something is “off” develops with experience. Awareness is a skill that can be practiced, even in the gym. Think of the last five times you have fallen, and ask yourself if each was sudden and unexpected. If, say, two out of five of those were unexpected, then do some work on your awareness.

Lizzy has a GoFundMe to help with medical bills. Do visit.