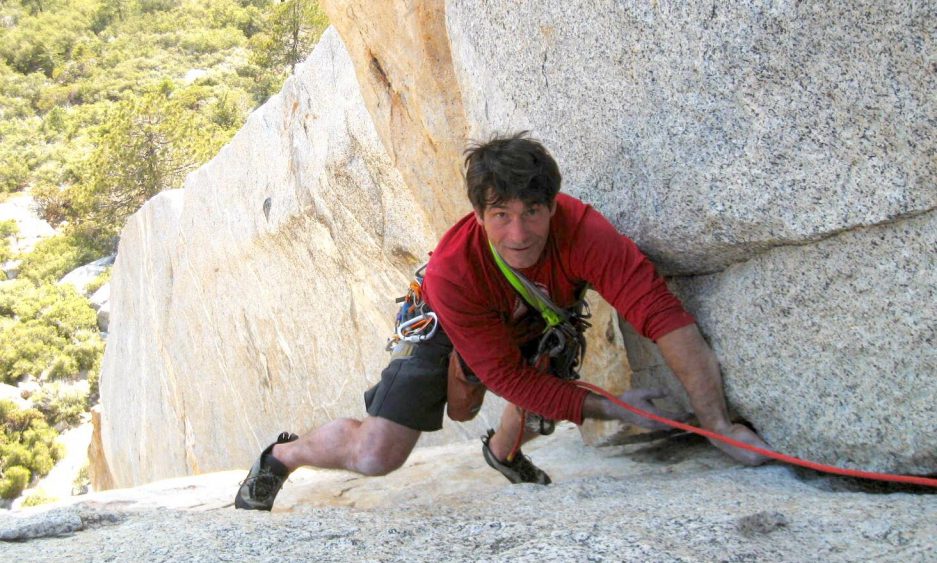 Michael “Mike” Flood, a longtime Southern California climber, remains in critical condition after a fall soloing the route Potholes (5.9) at Stoney Point, where he was a respected regular, on June 14.

Climbers on the scene hastened to help, one phoning 911. Flood, 58, was helicoptered out and taken to the Intensive Care Unit at Northridge Hospital. He fell from near the top of the route, approximately 50 feet, according to a Los Angeles Fire Department (LAFD) report.

Flood lives in Phelan and works in machine maintenance at a company that makes electrical components, according to his sister, Leslie. She wrote on a GoFundMe account, June 15: “His condition is critical, with bleeding on the brain, a fractured spine and other broken bones, bleeding in his gut, etc. … I’m fundraising for his hospital bills and for any monies he might need for his recovery.”

Mike Flood’s close friend and climbing partner, David Katz, back from when both were middle-school age, tells us: “We have had a wonderful friendship and decades of adventures together. Several days before his accident we were planning a summer climbing trip to the Sierras.” Flood has many first ascents, Katz says, especially in the Southern Sierra.

“I am shocked this happened,” Katz continues in a message. “Mike is a very safe and super solid trad climber. He is also very bold and like myself does enjoy free soloing. I have never known any climber tougher than Mike Flood.” He said Flood had soloed the route, Potholes, a popular 5.9, many times.

Routes at Stoney are historic and considered hard for the grades.

“He was really into bouldering and quite strong,” Haroutunian says, calling Flood “very analytical” and “sober and serious” about climbing.  Potholes “would be easy for him,” Haroutunian says. “Something must have happened.”

Cole Gibson has known Flood for 17 years, or, as he writes us, “basically my entire climbing career.”

Gibson continues: “Mike single-handedly taught my good friend Steve Estren and me how to trad climb, first at Stoney Point and then later at Tahquitz, just how people have been learn to climbing in Southern California for the last 100 years. Mike was a natural-born mentor and a big reason why I know how important mentors are in sports and particularly rock climbing.

“He is a very safety-conscious trad climber, and that definitely rubbed off on me. Mike’s motto was, ‘Trust your climbing.’ I’ve run those words many times through my head on the rock, and it never fails to calm me down and help me concentrate. Mike has been climbing at Stoney Point since he was just a teenager. I don’t know how many times he has soloed Potholes but a conservative guess would put it in the hundreds. Makes me so sad to think about Mike’s fall. Anyone that knows him knows he’s one of the toughest guys ever, so if anyone can pull through this it would be Mike.”

David Potter, admin of the SoCal Climbing Facebook group, posted a short account of Flood’s and David Katz’s FA, in 1973, of Center Route (5.8) at Point Dume. Potter messages us: “I’ve heard the story from Dave …[how] as 13 year olds they rode the bus to get there, they ran it out, and they were hand bolting.” The two placed three bolts, one at 20 feet and two at 40. (Katz also tells the story in his 1992 guidebook Getting High in L.A.)

Katz tells us: “The expression, ‘He would give you the shirt off his back’ definitely applies. He is also a fairly solitary, quiet personality and would be the first person to step up to a bully. Nobody I ever knew would want to tangle with Mike. Mike is a very honest, hard-working man of honor.”

Katz, like Gibson, says, “If anyone can pull through injuries, it’s Mike,” adding, “He is built for wear and tear.”

“The nurse said it’s looking up  and that he did very well during the surgery …. but is still very sick and in critical condition.   He is still in a medically induced coma.   She said we need to give him time.” He is on dialysis.

Leslie made this heartrending addendum on the SoCal Climbing group on June 20:

“Please spread the word … Mike’s in trouble and is all alone in the hospital with no visitors because of COVID-19. Talk to him in your thoughts. ….[P]lease think about Mike and the good memories you have of him.

“And please support Mike in his recovery.” She asked, with thanks, that others share the GoFundMe link.

An update on June 21 unfortunately was sorrowful:

“Mike took a turn for the worse last night. I got a call from the hospital at 2  a.m. The nurse told me that his blood pressure was extremely low and that he had turned blue. They rushed him to surgery at about 8 p.m. last night and found three bleeding arteries in his chest. … They were able to repair the damage but he lost a tremendous amount of blood and so they had to do a blood transfusion. Now he’s on blood pressure medication. In addition, he’s been in a medically induced coma since he’s been there and now he’s in a medically induced paralysis … I’ve been saying to myself and others, ‘When he comes home,’ not, ‘If he comes home.’ He has to pull through this, so I need you all to continue praying.”

UPDATE: As of June 25, Flood had stabilized, though he is not yet responsive. He was put on a feeding tube, with another procedure June 25 “to clean out his abdominal cavity,” Leslie Flood tells RI. A tracheostomy is to follow.

She posted: “I really feel like Mike is going to make it through this but has a long way to go. I also believe that your prayers and thoughts are doing the work.

“Please continue praying and sharing the GoFundMe link! From the bottom of my heart, I thank you!”

Mike Flood has a daughter, Miranda Flood, age 29, doing her medical residency at the University of Tennessee; she has chosen the field of urology. Neither of Mike’s parents is living. Leslie is his sole sibling.