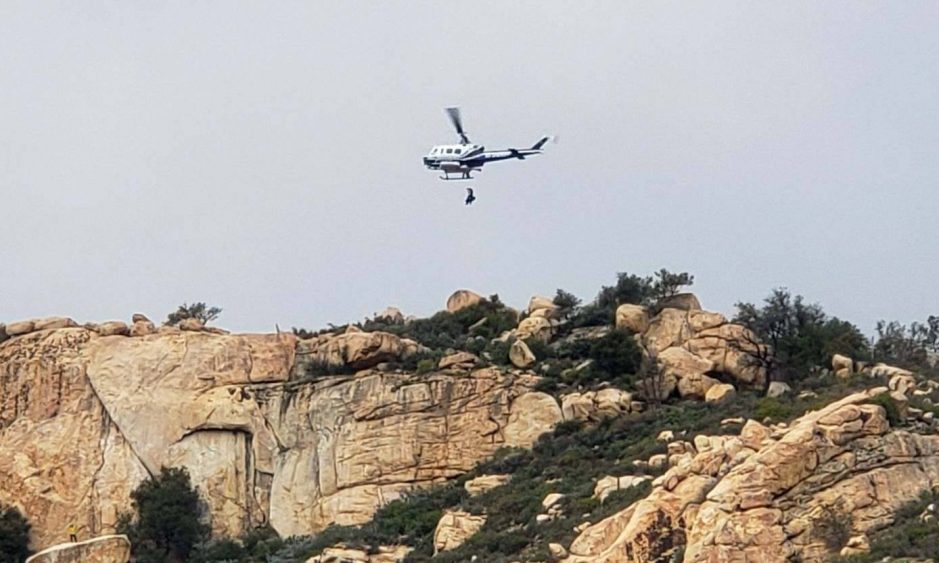 A climber with a broken ankle was rescued Sunday from an area east of San Diego, near Descanso, according to an official with Cal Fire San Diego.

An adult male believed to be 18, Cal Fire Captain Isaac Sanchez said, had fallen approximately 20 feet in the accident.

Sanchez said of the climber, “He was alert and oriented. He was awake and knew what was going on.” The climber was not rescued from the wall but was on the ground.

A helicopter flew in and hoisted him out, delivering him to a trailhead about a quarter mile away. A ground crew of four had hiked into the site, and a rescuer lowered from the helicopter. Including the helicopter crew, eight personnel were involved, Sanchez said. The name of the climber was not disclosed in the report, and Sanchez had no update on his condition.

The call for a rescue came in at 3:50 in the afternoon on Sunday, April 5, according to reports. The injured person was delivered to the waiting ground ambulance at about 5 p.m. From dispatch to delivery, the rescue took a little over an hour.

Cal Fire works in coordination with sheriffs’ departments to help rescue climbers, hikers and others injured in remote areas. Helicopters are used frequently to minimize time in locating people and delivering them to care.

As to activity now, during the current pandemic, Sanchez said to respect local restrictions: “Ultimately it comes down to personal safety. Just please operate in a safe manner. Some of the pastimes we do are inherently dangerous. Really practice safety and keep safety as your primary guide.  Use that as one of your factors as to whether you should be doing it. If you are doing it, keep it as safe as possible.

“These kinds of rescues are dangerous under the best of circumstances. These are not simple rescues. We do ’em all the time but the danger is there every time. We just want folks to keep the big picture in mind.”

A report in the San Diego Union-Tribune identified the climbing area as being off Wildwood Glen Lane, west of state Route 79 and north of Interstate 8.

A Mountain Project description of Descanso Wall fits that description, and Martin Veillon, an early developer there, confirmed it from the Cal Fire photo shown at the top of the page, saying, “Yes, that’s where he was. It’s a very popular crag these days.”

The photo, he said, shows the Main Wall area, “with Monster Rock on the right, and directly below the helicopter is the section that is perfect for beginners and kids.”

The walls are about 120 feet high at the highest point, and the area includes boulders as well. Starting in the mid-1980s, Martin and his son Peter put up many routes and did much trailwork there. They had the area to themselves for years, but others have established routes as well. Martin described the area as like Mt. Woodson, some 30 miles away.

When the SoCal Climbing Facebook page shared a link to the San Diego Union-Tribune report about the rescue, a group member wrote, “None of us think we will be hurt climbing, yet it happens ALL THE TIME! Stay home, people, and stay safe!”

“Speedy and safe recovery to whoever it is,” wrote another. “And shoutout to our excellent rescuers.”

When contacted for a comment, David Potter, administrator of the group, replied: “SoCal Climbing is asking all climbers throughout Southern California and the nation to stand with us during this outbreak as we refrain from local and travel climbing. We’re choosing to self-quarantine in order to reduce infections and allow our over-burdened health care workers and first responders the space to treat those most in need.

“We wish the climber a speedy recovery. Rescue personnel responding to incidents during pandemics face additional risks to their health. We can choose to keep them safe by staying inside.”