Errant Spot and a Shattered Leg in Bishop Highball Accident 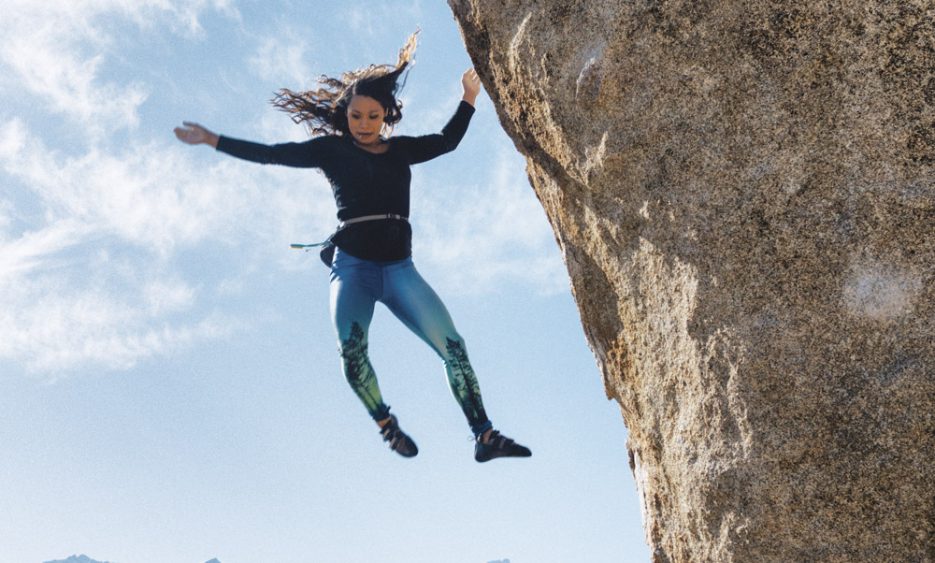 On February 24, Sierra Knott, 27, from San Diego, California, took a burn on Saigon Direct (V9) in the Buttermilks. Saigon Direct is a proud boulder, a variation to the uber-classic Saigon, one of the best V6s in the area. Both top out at around 25 feet.

Knott, who has sent climbs of this grade, had three spotters and around 15 pads that day. Knowing the climb well, she made sure there were no gaps in the pads, and that her landing zone was generous, about 10 feet in diameter. Confident in the set-up, she went for it. All seemed well, and she got past the crux, but a toe popped on one of the last hard moves, and she fell. One of her spotters made an unfortunate mistake—the person caught her right leg, causing her left leg to come down hard. Knott’s tibia and fibula shattered from her knee to her ankle. According to Knott, “I looked down and saw what would be my shin zigzagging its way down to a deformed ankle. My foot was connected to my leg like something out of ‘The Exorcist.’” Not discharged from the hospital for a month, and many rods and metal screws later, Sierra is still recovering.

Pitching off high boulders is becoming increasingly common as pad stacks get bigger and better, but a mistake can still send you to the hospital. When you boulder higher than 20 feet you are playing with fire, but mid-range highballs, like Saigon Direct, can be reasonably bouldered with the proper precautions. Knott did the right things by carefully stacking pads, so, short of not falling, she probably couldn’t have done anything to prevent her injury. However, her well-intended spotter, by attempting to catch Knott, actually made her fall worse by making her land on one leg instead of two.

Tell your spotters how to spot you. Saying nothing leaves too much to chance. Let them know where you will be particularly vulnerable on the climb (maybe work that on toprope), and where you will likely fall. Be aware of how your fall path will change as you gain height. As you climb, this might entail looking down periodically at your landing, and having your spotters move the pads.

“You should never assume that just because someone is a strong climber, that they are also a star spotter,” says Knott. When a good spot really matters, make sure you know your spotter. A beginning climber can actually be a better spotter than a pro.

A spotter shouldn’t try to catch a climber from a significant height. I’m 5’10” and 170 pounds, and as a former gymnast and gymnastic coach, I can “break catch” someone of a similar size under the arms if their climbing shoes are around 10 feet off the ground. But from 20 feet that same person will come plummeting down so hard a catch isn’t possible or advisable. When the climber is too high to catch or slow down, the spotter should strive to steer them by the hips onto the pads, keep them upright, and keep their head from hitting.

Bouldering on rock is different from bouldering in a gym. It’s an obvious point, but with so many gyms putting their bouldering lips at 18 feet, above fully padded floors, it is (sometimes unfortunately) ingrained in many people’s minds to hit with their feet, then butt (if ever so slightly) and then roll backwards, or to the side; it’s an effective technique to distribute weight across different points over the time of the impact, but, in reality, it’s a result of not having spotters. In fact, the Climbing Wall Association published an article concluding that in a gym, spotting often causes more harm than good. Hence, with fully padded floors, we are basically on our own and now have bad gym-born habits. But outside, rolling is bad technique since the pad situation is never as kosher as the gym.

KNOW HOW TO FALL

This comes naturally for some, and others have to work at it. If you’re the latter, pretend at the gym that the ground is made of concrete—it is a revelation, and it’s how early boulderers thought. As you climb, be aware of climbing and falling simultaneously. The whole “just go for it, think about nothing else while climbing” will only get you so far. Some tips are: don’t lock your knees, but don’t land in a deep squat either. Land with a wide stance, which will help keep you upright rather than toss you backward. Don’t slacken your back and collapse forward (bulged-disc territory). Be cognizant of potentially coming down horizontally, and plan for the event. Finally, everyone forgets to practice falling. Don’t assume that since you fall a lot—we all do—that it suffices as practice. Rather than downclimb, jump off on occasion. Pay attention to what falling feels like at varying heights, but don’t put yourself at risk practicing.

One would be remiss to not address the mental side of things. In my experience, climbers think they know themselves better than they do. Some questions to ponder are: Do I make better or worse decisions under pressure? Do I freeze up when a fall would have consequences? Are my motivations pure for highballing? Am I in over my head? It takes a high degree of self-awareness to know if you are ready to make hard moves high off the deck.