Vincent Colliard and Børge Ousland embark on a decade-long project to cross the world’s 20 largest glaciers and icefields to help improve our understanding of these rapidly changing environments.
This is a SPONSORED ARTICLE brought to you by Mountain Hardwear. 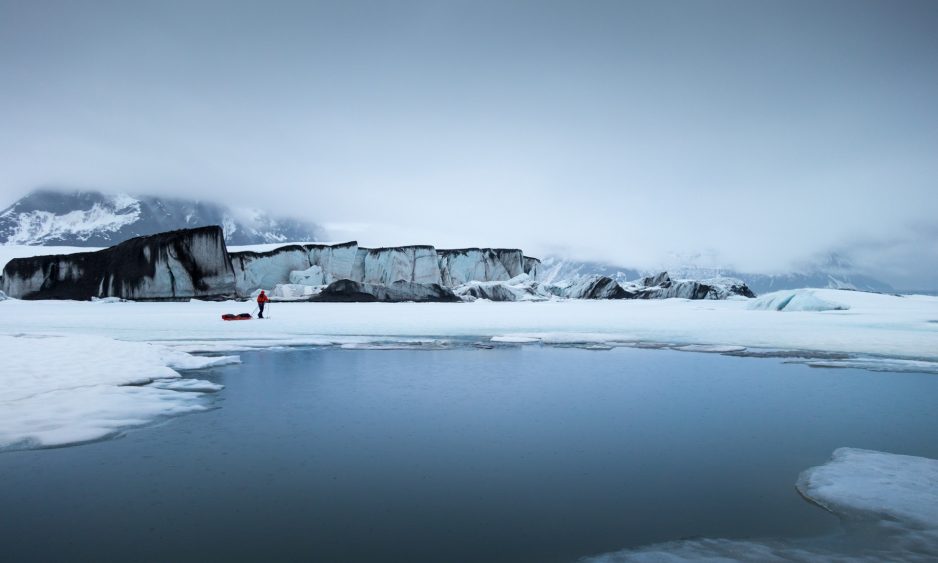 The polar bear stood on the shore watching the boat approach with its black eyes. Aboard the 31-foot trimaran Vincent Colliard met the animal’s stare. Colliard was part of a three-man team attempting to circumnavigate the Arctic Ocean in a single season; and the expedition was going well. Retreating icefields had left both the Northeast and Northwest passages free of ice for long enough to allow the boat to sail through with ease. A century ago it took Norwegian explorer Roald Amundsen three years to cross the ice-ridden Northwest Passage. It took this team 25 days.

The retreating ice was key to the success of this 2010 expedition; yet, the changing conditions were drastically affecting the delicate arctic ecosystem. The ice was gone from the typically frozen Bellot Strait and the polar bear, displaced from its traditional hunting grounds, had been forced further afield in search of food.

“I’ll never forget the way this polar bear looked at me,” says Colliard. “That was a huge eye opening experience for me and I started to feel responsible for the acceleration of that [climate] change.”

This expedition was a huge accomplishment in polar exploration, yet Colliard expressed his concern: “How could we claim a success when we had climate change to thank?”

Three years later, while skiing across the island glaciers of Svalbard, Colliard and his expedition partner and mentor, the legendary Norwegian polar explorer Børge Ousland, who was also on the 2010 Arctic expedition, came up with the idea of the IceLegacy Project. Based on a desire to draw attention to the fragile glacial and polar environments they both live for, Colliard and Ousland intend to explore and document the 20 largest glaciers in the world. This long-term project, which is expected to take over a decade to complete, is designed to act as a scientific window to these remote regions and to shed light on the rapid changes they are undergoing.

Nearly 70% of the world’s freshwater is locked away in icecaps and glaciers, making them a critical resource for millions of people, and will lead to serious sea level rise should it be released into the world’s oceans. Furthermore, ecosystems in extreme environments, such as the Polar Regions, are the most vulnerable to changes in climate. Colliard and Ousland hope their project will raise awareness and prompt conservation of these fragile ecosystems.

“To me, icecaps are unique playgrounds where I feel alive,” says Colliard. “I like how they challenge me. But they have no voice; they are fragile and dramatically receding. Not only does the ice melt, but all the ecosystem around it is affected.”

Colliard, who is an all-around adventurer, grew up in the Basque Country of southwestern France, and says his passion for exploring the most remote places on Earth evolved naturally after being inspired by stories he read as a teenager. He was 24 when he partook in the 2010 Arctic circumnavigation expedition and met his first polar bear, and was 28 when he co-founded the IceLegacy Project. Colliard admits that sometimes he is daunted by the idea of the project taking more than a decade to complete, but insists the combined experience and common goal shared by himself and Ousland give them the edge they need “to go all the way.”

Since launching the project in 2014 the pair have successfully ticked five icecaps: the Stikine, Wrangell-Saint Elias and the Western Chugach—all in southern Alaska and the three biggest icefields on the project tick list—and the Main Spitsbergen and Nordaustlandet in Svalbard, Norway. During these expeditions the men ski, hike and climb, all while pulling sleds weighing up to 170 pounds. When the terrain is unforgiving they will carry the sleds on their backs. They cross perfect, untouched snowfields, steep and deeply crevassed glaciers and jagged rocky peaks, all in a vast and echoless landscape few people are able to experience.

Colliard and Ousland have witnessed dramatic evidence of climate change and changing glacial conditions during their IceLegacy expeditions. On the Chugach expedition, which took place this past summer, the pair was roped up while crossing the unavoidable snow bridges on the approach to the Matunuska glacier. Suddenly, one of bridges, weakened by the warm temperatures, gave way beneath Ousland and he fell into a gaping crevasse below. Acting instinctively Colliard turned and managed to anchor his companion with his own bodyweight.

“Warming temperatures will change the shape of the ice,” says Colliard, when asked whether he foresees future expeditions becoming more dangerous as the glaciers are further affected by climate change. “Some places might be more dangerous now,” he continued, “both in terms of avalanche danger and instability of snow bridges.”

Yet Colliard is driven by more than glacial adventure alone. Despite not having a formal science background, he is strongly influenced by a desire to facilitate research in these inaccessible regions.

“It makes sense to me to collaborate with the scientific community because it is a way of knowing these places better,” says Colliard. “It means that we are able to act more efficiently towards the conservation of fragile ecosystems living around these huge regions of fresh water.”

Back in 2015, while crossing the Stikine icecap, Colliard and Ousland noticed an abundance of black soot on the otherwise pristine ice. This soot was likely transported by large-scale atmospheric circulation systems from industrialized regions in the Northern Hemisphere, and it greatly increases the rate of ice melt. Without the efforts of expeditions like the IceLegacy Project this evidence of the impact of human activity would go unobserved and unreported.

During the southern Alaska expeditions— collectively known as the Three Chapters Saga—the pair collected snow and ice samples and delivered them to Dr. Jeffery Walker at the University of Anchorage, where Dr. Walker and his team study the chemistry of the ice to understand past changes in climate and large-scale weather patterns, both in the polar regions and further afield in the lower latitudes. They will also determine whether the soot deposited on the surface of the ice is a product of industrial activity, as this will contribute to our understanding of how human activity is influencing ice retreat.

If Colliard and Ousland successfully collect samples from around the globe they will contribute significantly to glacial research and our understanding of the causes and effects of climate change.

An essential part of scientific research and exploration is information dissemination and its contribution to public understanding. Mountain Hardwear, as part of their recently launched Impact Initiative, wish to help Colliard inspire change by supporting the IceLegacy Project and by helping to share his story with a broader audience. The Impact Initiative is driven by a group of Ambassadors of Impact—including Colliard—ranging from storytellers to humanitarians, and from athletes to ecologists, who all wish to help identify and promote solutions to protect the outdoors.

“I deeply feel that our children and the next generations will explore a world that is not as rich as it still is if we don’t act,” says Colliard. “We have a common goal, and that goal is to protect the environment and the health of the environment that we all love.”

In the coming years Colliard and Ousland intend to cross seven Canadian icecaps, all located in the high Arctic. For more information and for updates on expeditions and news related to the project visit IceLegacy.com. 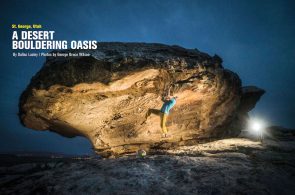 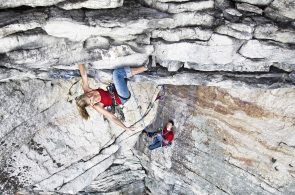