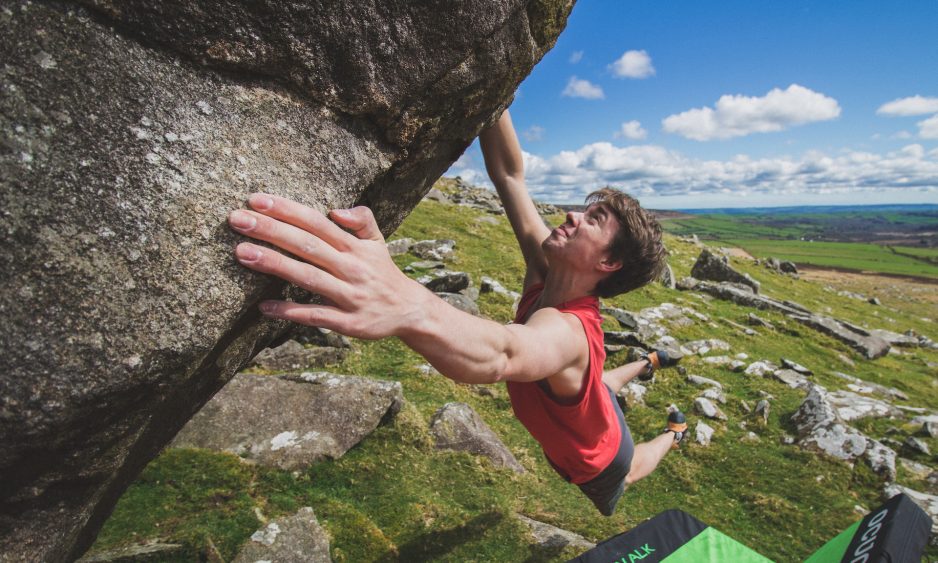 Chris Moir-Coe on an unnamed V5 in Pembrokeshire, Wales, U.K. Note the level of effort he is putting forth. He even made the effort to trek to the boulders despite recent rain. That kind of commitment will not serve you well in your pursuit of mediocrity. Photo: Jacob Martin.

MoonBoarding is hard and it hurts my ego. I haven’t touched a Tension board since I found out you weren’t allowed to match holds and add feet. Hangboarding is only kind of fun if I can do it while watching outrageously friendly Brits make 36 puff pastry canapés in the “Great British Bake Off,” and I’ve only ever been in my gym’s circuit room because there are a bunch of unfinished jigsaw puzzles in there that desperately require my attention.

My aversion to any form of training is matched only by my aversion to things like “sober January” and other absurd attempts to suppress your deepest desires in attempts to be, like, a better person or something. I’d rather see a selfie of you cuddling your ugly cat in bed at 11am than another boomerang of you falling off your sick new MoonBoard proj on your Insta-story. And I hate cats. Since when were so many rock climbers into self-discipline and depriving themselves of alcohol the night before the big send go? There must be some normal humans left out there who just don’t have what it takes to be professional rock climbers. I mean, seriously, evolv can only have so many ambassadors anyway. Mediocrity is due for a comeback.

For those of you who have been yearning to reconnect with your inner slacker—you’re in luck: a few simple steps will get you off of that sweaty progression toward #infinitegains, and back onto the painless plateau of complacency.

Jobs are great ways to limit the time you have available for training. No, I don’t mean slinging pizzas at Miguel’s or retro-fitting sprinter vans into mobile apartments. I mean the kind of job where you have to sit all day in an office in exchange for employer-sponsored health insurance, a 401k, and a middle-class lifestyle. If you’re lucky, you’ll tolerate your coworkers just enough to join them for happy hour. You might think you’ll make it to the gym for a quick hangboard workout after, but you won’t.

Step 2: Make the most out of your hangover

In a serious lapse of judgment, my parents let then 16-year-old me spend spring break in the Red River Gorge. During that week, a wise older friend offered me advice that changed my life forever:“You’re only as good of a climber as you are when you’re hungover.” Contrary to what that dude at the campground who goes to bed at 8:00 p.m. after a hearty dinner of carrots and hummus and a 30-minute foam rolling experience tells you, alcohol and rock climbing complement each other quite nicely. A “send beer” has exactly the same chemical properties as a regular beer, and there is no reason to delay the bubbly satisfaction until those rare moments when you send something impressive. In fact, you might just never send anything impressive ever again. Drink now, climb tomorrow, and be grateful that at least now you have a lame excuse for punting at the last bolt of your proj for the fifteenth time this season.

The chemically induced munchies that overwhelm inchoate stoners are sure to ruin the plant-based-near-starvation diet you picked up in Rifle last summer. Pro tip: most major cities have companies that will deliver fresh-baked cookies to your door, and peanut butter goes well on everything following the consumption of an appropriate quantity of edibles.

Nothing beats a good pulley injury as an excuse for neglecting your personalized training regimen. It will be weeks—maybe months!—before you’re back to weighted deadhangs after you rupture your A4. And you’ll always be able to call on your once-tweaked ring finger as an excuse for neglecting the campus board or flailing on a difficult move. Chronic elbow tendonitis will also work for this purpose, if that’s more of your thing.

Step 5: Learn to live vicariously through your friends’ achievements.

Bluepointing is the new redpointing. Belaying your strong friend while he sends Pure Imagination (5.14c) is the next best thing to sending it yourself. Plus, you can friend-spray about it all over social media without looking like a total tool. Maybe she’ll even tag you in her Insta-story later. You’ll get to experience that momentary joy of acquiring a half a dozen new followers for thirty minutes, after which they realize that you peaked three years ago when you climbed Ale-8 while simultaneously drinking a PBR tallboy and unfollow you.

This is probably the most difficult step on the road to mediocrity. Even the most average climbers have a hard time developing other dimensions of their personalities. Total gumbies are crushing V5s left and right simply because they hardly do anything other than loiter around the bouldering cave, fist bumping other flexing dudes who recently discovered that the pics of them climbing the blue problem get more matches on Bumble than that fuzzy photo of the college gang playing flip cup back in 2013. Let your budding interest in cycling take up more of your free time. Make that Indian Creek basketball team you’ve been threatening to create for years a reality. Read a book. Build a house. Start a family. Do literally anything that will atrophy your fingers enough to make you question your commitment to that $95/month gym membership.

Now is probably a good time to delete your 8a scorecard—you haven’t done anything worth more than 900 points since you were in grad school anyway. Even if you can get out of those two weddings in Jersey this fall to make room for a few weekend trips, the chance of you sending another 13d ever again is about as big as your chance of meeting that strong, smart, age-appropriate (and single) climber chick of your dreams on your next trip to the Red. I’m not saying she doesn’t exist, just that her boyfriend probably already sent Huge on their trip to Rifle last summer.

Don’t worry if you can’t find a real job, any strong friends, or other interesting hobbies—plateauing is inevitable, as long as you avoid trying too hard. Any time you feel compelled to rehearse that crux move a few extra times, spend three hours on the Tension board with your gym buddies, or pass on that fourth slice of pizza, remember how fleeting the satisfaction of busting into a new grade really is. That overwhelming sense of achievement you felt when you did your first 5.13 vanished when you overheard that middle school kid with braces say it was soft three minutes later. So, go grab a beer or four and get comfortable on that plateau of mediocrity for years to come.

Eleanor Krause has been a remarkably average rock climber and above-average drinker for the past fifteen years. She is best known for her ability to rally to the crag regardless of the volume of tequila consumed the evening prior. Eleanor is now a PhD student in Cambridge, Massachusetts, where she spends most of her free time working on jigsaw puzzles in the circuit room at Central Rock Gym and daydreaming about the Red River Gorge.

Beware of the Professional Resident Climber

If Rock and Ice is going to continue to publish these half a$$ed guides that leave out the real info then I’m going to have to just continue to complain to strangers on the internet about it! I mean really, you’re just going to ignore the penultimate technique of having kids? Not only do they take up 100% of your time, they wake you up at all hours killing your sleep and recovery. Tell me there is a better bang for your buck out there. Now I have the ultimate plan that I’ll share cause I’m that into giving back… Read more » 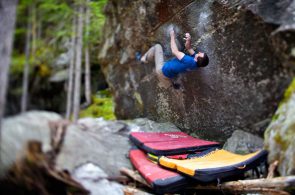 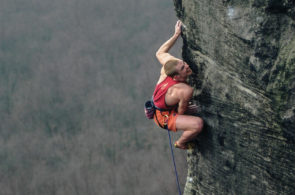 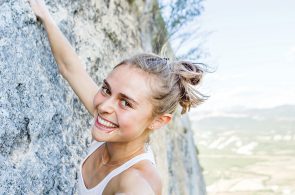