Kathryn Perkinson set herself a goal: 5.10b to 5.12 in seven months. And she achieved it. Here’s how. 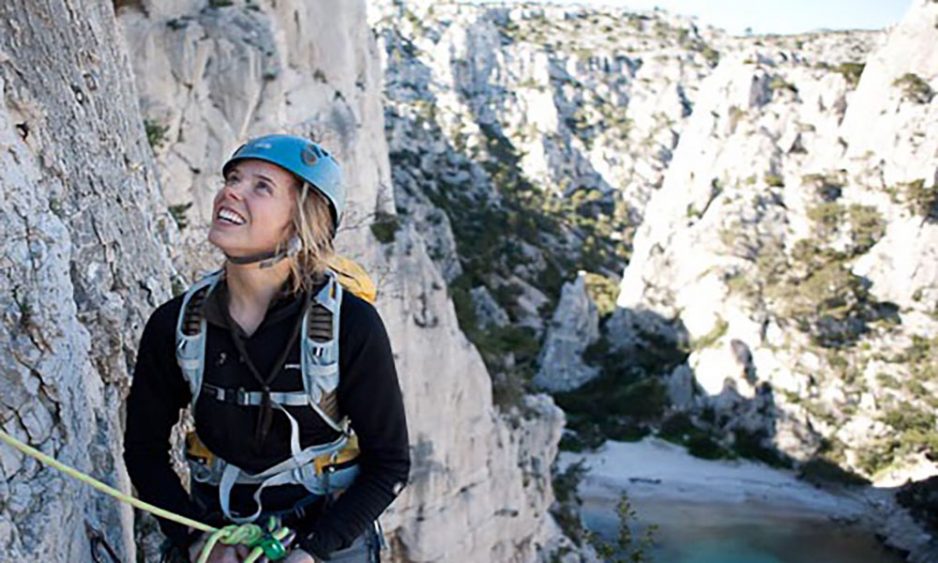 The author enjoying a climb in France. Photo: Nacho Grez.

I live in a town where climbing 5.13 is normal. Or as normal as really big moves on really tiny holds ever is. Where everyone pouring beer or flipping burgers at the bar has forearms with 15-inch circumferences and fingers that could shatter your ceramic mug that says “#1 Grandma.”  In the past few years, rock climbing for me has gone from “this scary thing I do to hang out with my friends” to something I really love, something that gives my weekends and workouts purpose.  A way to connect me to where I live— spending days and evenings focusing so intensely on the 50 feet in front of me, noticing the tiny subtleties and variation in texture, color, density, relishing in the change of season that makes space for climbing until 10 pm or lifting hard and going to sleep at 8:30.  It’s become a way to share experiences with people I care about—from celebrating success to working through fear or ego.

In January 2017, I was climbing in Sinks Canyon and came to the hard part of a 5.10b. I could feel my heart beating in my throat as I pawed like a desperate cat at anything within arms’ reach. “Take!” I shouted down to my climbing partner Jackie. “Are you sure?” “YES.”  Something had to change. I was capable of climbing a 5.10- sport route, but I hadn’t committed the time to making it feel smooth or natural.

I needed a goal. I am motivated by working towards something and having a spelled-out plan for how to get there. I picked a number and a time: 5.12 by the end of the summer. Was that possible? It felt as lofty as saying, “I’ve run a four-hour marathon and now I’d like to win Boston eight months from now!”

Well after seven months of hard work and practice, I did it. Here are the five strategies that got me there.

I’m lucky to live in a town that’s home to some really talented climbing coaches. I e-mailed Steve Bechtel from Climb Strong and set up a meeting. I knew I needed to climb more and get stronger, but had no idea how to specifically channel my energy.  I couldn’t do a pull up and had never used a hangboard, and the idea of projecting was as foreign to me as a coral reef to a polar bear. I know what you may be thinking: “A coach? That seems awfully spendy, I already climb 5.reallyhard, and I don’t live in Lander/Boulder/fill-in-the-blank.”  It’s not that expensive, and especially not if it’s your priority. I had a personalized plan that cost $60 and lasted me anywhere from one to three months (price varied based on specificity and duration).

I probably ended up saving money (even after paying for coaching) by forgoing ice cream and beer after climbing.  And many of Climb Strong and other companies’ clients are remote. Wherever you live and whatever you have access to, it can work for you. With the program, I learned how to train deliberately when I was inside—whether it was doing specific bouldering workouts, using the systems board or timing my lifts. I also learned how to train deliberately outside—having pointed goals for each day at the crag and learning when to rest. I’m a firm believer that we all could benefit from coaching—an outside perspective, expert and someone to be accountable to.  Like my brother-in-law Josh always says, even Michael Jordan had a coach.

I think the single biggest limiter for me is my brain.  That little voice inside my head will whisper, “Yes, you’re six bolts up and not back-clipped and the rope is not behind your leg, but what if you fall in a weird way and you pull the rope behind yourself and the rope unclips from the last three bolts and the snake on the ground jumps up and…” Rationally, I understand that there is nothing unsafe about the way I climb or the routes I’m on. But emotionally, I feel an intense and debilitating fear that makes me gripped, clunky, and sweaty.

Climbing consistently is the one strategy I’ve found that (nearly) eliminates this fear. It gives me the time to practice my mental game and self-talk. When I’m more familiar with that voice in my head, I am more adept at saying, “Hi! Thank you for your concern, I really appreciate it. However in this moment I am going to disregard what you’re saying because it’s not actually founded in reality. To bed with you!”

By now this should be old news. Lifting weights makes you stronger, and you can lift without hypertrophy. Your muscle isn’t dead weight or bulk, it’s tissue that works for you and your climbing. I started lifting in high school and within weeks became a quicker, better lacrosse player and equestrian (nerd alert).  Lifting in a programmatic way—developing overall strength with systematic, deliberate workouts—made me a better athlete, which made me a better climber. I got to work on my deadlift, bench press and front squat (among others).  And with consistent practice, I can now do a pull up!

Stopping running was hard for me. Really hard. Running has given me joy and been an anchor in my life for as long as I can remember. When I was unemployed and on this training program, I’d go for runs because I had nothing but time. But once I had a job again, I needed to make a choice. If I only had an hour or two to workout, was running really priority? No. Climbing was. And so I (somewhat begrudgingly) took a seven-month hiatus from running and had more energy and time to focus on my goal.

4. Hang on your fingers.

I heard Climb Strong coach Charlie Manganiello say on a podcast, “It’s not your major muscle groups that give out while you’re sport climbing. It’s your fingers.” I think that building stronger fingers was by far the biggest physical difference that contributed to my success.  I could hold onto smaller holds for longer and with the confidence that I wouldn’t hurt myself.  I started hangboarding regularly, and even bought a travel hangboard to take on 30-day hiking expeditions. Of course, do this in a controlled, deliberate, patient way following a program built by professionals. It’s easy to go too hard, and nobody wants sad, hurt fingers.

This one sounds corny but it’s true. When I sat down with Steve in January and told him about my current rock climbing ability and where I wanted to be by the end of the summer, he confidently said that we could get there with some hard work. This guy knows his stuff and he says I can do it! Now I too believe that I can do it. I think that belief gave me daily motivation to work really, really hard.  I remember a few days driving back from the crag after climbing ten pitches knowing that I was supposed to go lift weights.  I felt so tired, and the idea of going to a dark gym alone felt daunting when I really wanted to eat popcorn under a fleece blanket.  But the psyche was in my knowing that this was moving me closer to my goal, and that little decisions add up to big decisions. That belief in me from another person gave me belief in myself to put myself out there and try.

Author’s note: I have no affiliation or sponsorship from Climb Strong or Tension. I just believe in their products.

Kathryn Perkinson is a freelance writer, artist and educator living in Lander, Wyoming. Find her at kathrynmontana.com and @kathrynmontana

Simulation Training: How to Do a Move You Can't Do 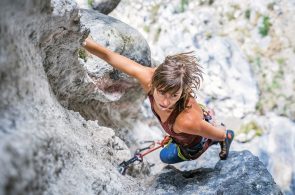 Want to climb better instantly? Then learn how to warm up for climbing properly with these tips from Neil Gresham. 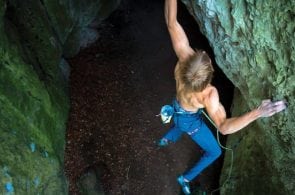 How to dyno: The blueprint for dynamic movement.

Hangboarding for Endurance: Not Just for Power