Margo Hayes and the Power of the Mind
People +

Spotlight: Margo Hayes and the Power of the Mind

This article was originally published in Rock and Ice issue 238 (November 2016).

Arriving at Smith Rock, Oregon, in February, Margo Hayes, 18, wanted to try Scarface (5.14a), the first 5.14 put up by an American. She knew its history and author, Scott Franklin; she had grown up on the same gymnastics team with his son, Jesse.

Yet the start felt very hard on her first go … and second … and third. Hayes, who was visiting from Boulder, thought, Maybe I should just step away from this climb. I don’t have much time here. She could instead hop on a route she knew she could send.

Then, as she recalls, “I decided to put my all into it. You have to be willing to walk away from a comp or an outside trip empty handed … without the result you wanted or the send you were dreaming about.”

Her ascent, after “four or five days,” showed how much she could do with tenacity and belief. Later, in August, she broke through yet again, on Rifle, Colorado’s, Bad Girls Club (her first 5.14d), just before leaving for a semester to study French and climb in Aix-en-Provence, Southern France, during a gap year before college.

How did you feel trying a big route right before leaving the country?

All you can do is try your hardest and get yourself in the right mindset, and hopefully the magic happens. But rock doesn’t go anywhere. When you’re in a competition you have that moment, to get it done, focus, try your hardest.

When you’re out on the rock, it’s important to have the same mental state, to make the most of each time you step on. But it’s not over when you fall. The rock will always be there. You can come back even if it’s somewhere across the world.

What do you plan to study?

I’ve always really loved science, couldn’t get enough. I probably will major in that. There are a lot of options. Marine biology, medicine, options all over the place. I may double major in art.

You won a prize in a scholastic art show. What was the art piece?

I combined art and science. I used 16 test tubes, old test tubes. Each represented a year of my life. One of them was old pencil shavings, lots and lots of pencil shavings, representing when I began drawing. My mom is an artist, and I grew up doing a lot of projects, always having colored pencils or paint.

Art brings me something I don’t get anywhere else in my life. Almost like a meditation.

Are your parents athletes?

My dad is a climber. He grew up in California and played a lot of different sports. In college he was introduced to climbing, started buildering around different campuses and going to Yosemite every weekend. My mom used to climb, before and after they got married. She doesn’t climb anymore. She’s a big gardener.

Our garden has everything. During the summer probably 50 percent of my diet comes from the garden.

Yes, I have an older sister, Nola, who just graduated from the University of Venice, Italy. She speaks six languages. She sets the bar. In many ways! I’d like to speak French. I think bilingual is the minimum requirement I have for myself [laughs].

She just graduated with a degree in Mandarin and auditioned for grad programs in New York. Her passion is theater: dancing, singing, acting. She surprised herself and ended up getting into AMDA [American Musical and Dramatic Academy].

I think mentally I’m strong. I put my mind to something and do everything in my power to succeed in it. A lot of that comes from being a gymnast. I think my fingers are pretty strong. My weaknesses [laughs]—those are for me to keep to myself and work on.

I don’t normally share super special [goals]. But … I am hoping to climb much harder than I climb now. 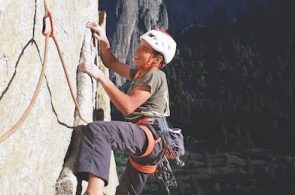 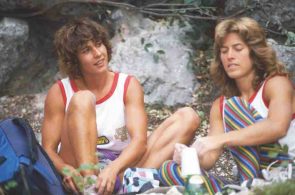