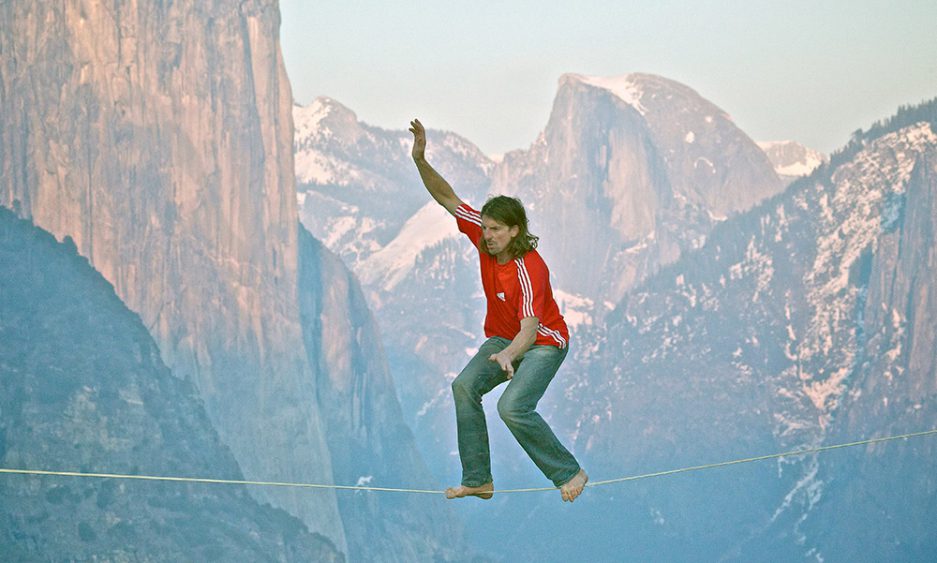 My three arts are climbing, flying and walking lines. What I do is a spiritual practice and art, and though I’ve been competitive in the past, my competitive drive has always bothered me. I’ve learned that my highest powers never come from being competitive.

My dad was in the army for most of my youth. He was very regimented and I learned to train from him.

My mom was a yoga teacher. I learned yoga pretty much as a baby. I would just mimic what my mom was doing and I learned right away to focus on breath and movement.

I was born in Kansas, but moved all around every year. We moved to Israel for three years, and we lived in a town called Bethany. I used to go on the religious hikes with this guy Father Jerry. Father Jerry would take us out into nature. He wouldn’t really teach us religion, and I’m not religious whatsoever—at least when it comes to organized religion—but Father Jerry would take us to these caves and different mountains, and that was really the beginning of exploring the outdoors for me.

One time, I was hiding in the boulders—long story—and noticed a piton up on the rock, shining. In my Converse All-Star basketball shoes, I started soloing up to check out that piton, and I got into a place where I couldn’t down climb. So I did my first climb as a 200-foot free solo, and that was the beginning of rock climbing for me.

That was really how climbing went for me for a bunch of years. Free solo.

I tried going to college. I went to the University of New Hampshire and got into rowing. Rowing taught me a lot about being fit and regimented. I loved the rowing part, but I hated going into classes and learning these things that really didn’t interest me.

I’ve never sought out sponsorship. When I eventually started doing some climbs that were cutting edge, people noticed me and sponsorship offers came, and though that wasn’t my focus, it allowed me to climb full-time and I took the opportunity and said yes to being a paid climber.

But still, to this day, I don’t seek out sponsorship. My focus is still to just practice my art, perfect my art, and do my art at the highest level and let the rest of life work itself out.

The main part of my philosophy has always been: “Go toward your fears.”

I was the first person to see Dan Osman dead at the base of the Leaning Tower. I found his body and there was a rope hanging above that had broken. When you see one of your heroes lying on the ground dead, with a broken rope above his head, it’s hard to get over. It took me many years before I trusted the rope again. I had seen what happens when one breaks.

It always bothered me that I was held hostage by my fear of falling. I was a horrible lead climber. Being a free soloist, I found trying to climb to the point of failure and slipping off was not something that I ever wanted to get used to. I’ve just learned to get over that fear in the last decade.

Since my early days climbing, I’ve always known I’d be an alpinist, and I always knew there would be a real need for speed. So speed climbing for me was with the thought of taking it to the mountains.

The best climbs I’ve ever done were down in Argentina in 2002. I did the first free solo of Fitz Roy, via the Supercanaleta (1,600 meters 5.10 80 degrees). I speed soloed the Compressor Route (900 meters 5.10 A2) on Cerro Torre, and I did the first ascent, all free solo, of the Californian Roulette—a 7,000-foot new route on Fitz Roy. Then, while coming down, I was struck on the leg by rockfall. I’d climbed the route in under 10 hours, and it took me about 36 more hours to get down.

While crawling out of the mountains, I thought: There has to be a better way. That’s when I realized BASE jumping is the way to get off these walls.

I’m working with a scientist and we’re developing a safer system for wingsuit flying. About 30 BASE jumpers and wingsuit flyers died last year, and this year has been very similar. I just felt uncomfortable with what was going on. And though I felt like I was always safe—I’ve never had a close call—I realized I must be missing something.

Because I’m a free soloist, I think about odds. It’s not good enough to think: I will survive this once. When I think about doing something, I think: Will I survive a million out of a million times?

Sean Leary—one of my best friends and the guy that I jumped with more than anybody else—died recently. Though I’ve known a lot of BASE jumpers who have died, I’ve sort of isolated myself from the community because I don’t want to risk developing a pack mentality. But when Sean died, it hit home hard. It made me question even more the safety of our system.

We can’t fool ourselves. We’re rock climbers, we’re highline walkers, we’re flying humans. These are some of the most dangerous pursuits known to man. We all play these games that most of the time are just fun. But if you mess up, you die.

I feel like I’m still progressing as a climber. I mostly focus on Free BASE climbing—free solo climbing with a BASE rig on my back—and I don’t publicize what I do, but I don’t really need to. I’ve gotten myself to a place where I can do my thing quietly. But I’m still pushing my three arts. 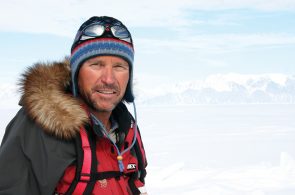 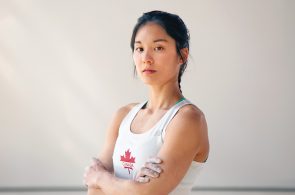 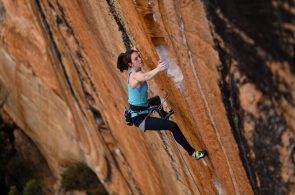