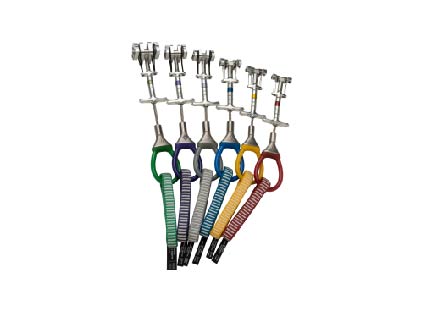 Black Diamond’s X4s are a big addition to small protection. Even boiled down, their nuts and bolts are a mouthful: The six sizes protect from .33 to 1.62 inches, have four cam lobes and a narrow head.

Black Diamond’s X4s are a big addition to small protection. Even boiled down, their nuts and bolts are a mouthful: The six sizes protect from .33 to 1.62 inches, have four cam lobes and a narrow head. The three smallest sizes feature an innovative “stacked axle” that gives the units the extended range of a two-axle design, and all the units have a crafty “armored” stem that flexes in all directions.

To compare the X4s to other brands’ units is a tad unsporting because no one else makes small cams with the expansion range of the X4s. The much loved Alien, for instance, the unit that opened the door for the X4 and created the market for this type of cam, requires eight units to cover the range of just six X4s, which also cost $10 less per unit. It is fair to compare the X4 to BD’s Camalot C3 and C4, as these are arguably the closest cams in performance and design. C3 fans will be happy to know that their babies still have a unit that is smaller, if by only a few hundredths of an inch, and the C3 still has a narrower head, though barely. In all other aspects, however, the X4 is a step up. The X4’s single-stem is more flexible than the plastic-sheathed two-cables of the C3, which never caught on with me despite working perfectly fine.
The X4 also delivers confidence-inspiring four cams instead of three, and the X4 has a greater range. For the latter point realize that small units will all have small expansion ranges, so don’t expect anything Biblical. The difference in the range of the smallest X4, for example, and its closest C3, is two hundredths of an inch. Still, I’ll always take all the range I can get, and I did notice that I was less prone to make a sizing error with the X4 than with any other small cam.
Compared to the Camalot C4, the X4 offers a no-brainer reason to replace the four smallest C4s—the .3, .4, .5 and .75. The X4’s head width is nearly an entire cam narrower than that of the C4, so it will fit into hidey-holes where its older sibling can only stand outside and cry. The X4’s trigger is also just as easy to pull, yet its stem is a lot more flexible. I also like the X4’s armored stem, a series of overlapping metal rings that sheath the cable. The armored stem and the X4’s shortened trigger wires, which are Kevlar in the four largest sizes, should make the X4 exceptionally durable, a key point for lazy me who has a junk pile of cams with busted trigger wires or kinked stems.
As I noted, the smallest three X4s use a new and innovative stacked-axle. The mechanics of this are as impossible to explain as love. Just know that the axle is machined and looks a lot like a car’s cam shaft. It works and is a benefit. Also know that the smallest X4s have the springs wound into cutouts in the cam lobes themselves. This helps minimize the units’ overall width, and is a nod to the innovativeness of the late Dave Waggoner who developed this concept decades ago for his Aliens. The larger X4s, the .4, .5 and .75, use Black Diamond’s standard double-axle configuration.
The action of all the X4s is as clean and snappy as a Marine’s salute. Machining and aesthetics are A+. Tech Geeks will point out that the X4s are a bit heavier and not quite as strong (though still CE approved and rated using 3-Sigma) as the other BD units. Don’t obsess, it matters little.
HOW TO CARE FOR CAMS
Conclusion: I will rack the X4s over the C3s, and if I need additional units or one that’s even smaller, I’ll supplement with the C3. I’ll also carry the X4s over the C4 in the latter’s four smallest sizes. Happily to that end, the X4s are color coded the same as the C4s (blue, grey, purple, green).
ABOUT THE RATING
I gave the X4s the highest possible rating because they are among the best small camming units I have used, and I couldn’t find a fault them.
READ ALL CAM REVIEWS
Features

• Only small cam with increased expansion range thanks to either a stacked axle, or double axles. Set of six covers same range as eight Aliens.

• Armored stem is rigid for triggering, yet flexible in all directions and should prove very durable.