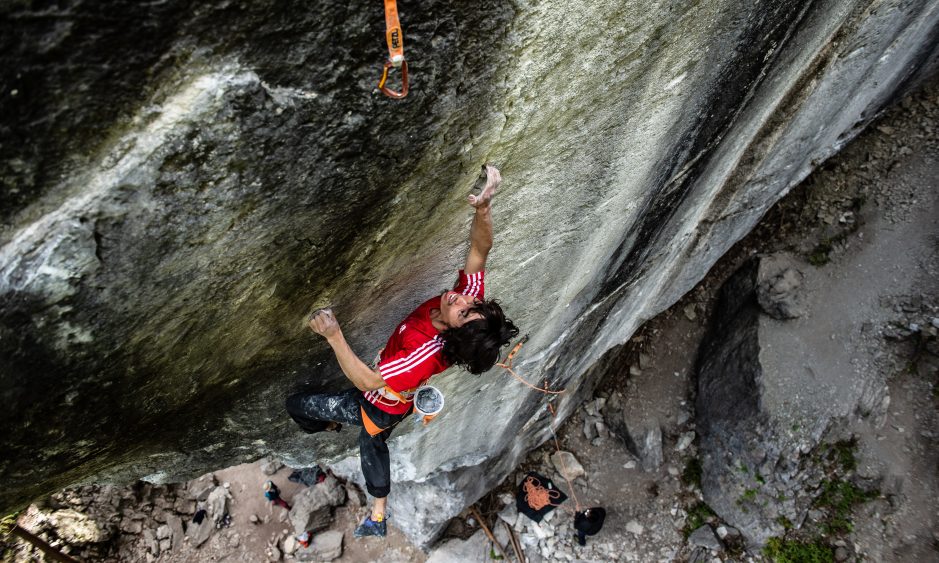 When the 28-year-old Japanese strongman Sachi Amma sent Soul Mate—formerly “ERProject,” or Elephant Rock Project—at Gozen Rock on March 24, he became one of the few climbers to have established a 9b (5.15b).

Since 2010, Amma has charted a steady course to the top echelon of the sport, both indoors and out. In that year he climbed his first 9a+ (5.15a) with Papichulo in Oliana, Spain. In 2012 he took first in the overall lead World Cup and repeated the feat in 2013.

Amma began focusing more on rock after asserting his dominance on plastic, and in 2014 sent his first 8C (V15) with Hydrangea in Shiobara, Japan. Back on a rope, too he sent his first 9b in 2015 by redpointing Fight or Flight in Oliana, Spain.

Having repeated projects for the better part of a decade, at the end of 2017 he decided to change tacks and develop his own routes.  The result was Soul Mate, Japan’s hardest route to date.

Rock and Ice caught up with Amma to learn more about the route and his plans going forward.

Can you tell us a bit about Soul Mate?

Soul Mate is on the beautiful face of Gozen rock, the best limestone area in Tokyo. Gozen rock stands in the middle of the mountain of Okutama, at the western side of Tokyo,about two hours by car from the city center. The area had been closed and forbidden to climb for 30 years because of parking problems, but my good friends, Tokunaga Nobuduke and his wife, Yuji Hirayama, with some others, worked a lot to get it reopened. They succeeded in 2017.

I bolted Soul Mate right after I made the FA of Maturity (9a+/5.15a) at Gozen Rock. It was the beginning of December. Soul Mate is a shiny line on the corner of the main tower called Elephant Rock. It was called ER Project before.

There are still hard projects from Yuji [Hirayama] and my friends on the same rock. Gozen Rock will be a good destination for foreign climbers as well soon.

How long did you project the climb for?

It was rarely perfect rock in this area, and I didn’t spend too much time to clean up the route. I kept coming at least one day a week from January 1. I didn’t count, but about 20 days I worked on it probably. Gozen rock is about one hour from my home so I could try it whenever.

On other days I was training specially for this route in the gym. I was committed to working toward this this route all the time. It was surprising that I climbed it so fast.

Can you describe the movement and type of climbing on it? What is the crux like?

It’s a pretty steep and bouldery route. You have 8c/5.14b climbing until the fifth bolt (25 moves). Then you have very good rest there. Then there are 10 moves of an 8B+/V14 crux section. The hardest part of the crux is a long move to a slot crimp from a small, two-finger pocket. You have to cut feet and bring the left foot on a high edge, and then go to the next slot side pull. Then after that the end is easier.

Why did you choose the name Soul Mate? What does it mean in terms of you and this route?

It is strange, but I always suffer when I am working on longterm project. But while trying this route, it felt more like I was just playing and having fun on it. Always I was energized after climbing.

I remember last two days before the send, I started feeling some sending pressure. Soul Mate felt like the correct word to describe it since I didn’t fight with this route.

In terms of difficulty, how does it compare to other specific 9a+ and 9b routes that you’ve done?

Honestly I am not kind of person who is always checking grades. It is not a big thing to me. But a grade have lots of information. And if I open new route, while it is necessary to give my personal thoughts on a grade, it should be discussed with any repeaters to find the correct grade.

This time I made a grade comparison table of my sends. I have done twelve 9a+ [5.15a] routes and one 9b [5.15b]. Soul Mate is the most bouldery route I have done. The difficulty is condensed in 10 moves and that feels enough to grade it 8b. But it will be nice to have a repeater t0 talk about it with!

It seems like you’re focusing on developing more in Japan now, yes?

I started opening new routes in earnest last year with Maturity (9a+/5.15a). I have been searching for projects for a few years in Europe but have never find something special [enough for me to bolt and focus on there].

Realistically, staying in Japan is fitting me now. I can work, play with my friends, spend time with my family and go climbing. I know there are lots of projects sleeping in Japan. So basically I think I’ll spend more time in Japan now and sometimes I go to other countries.

I am planning to make one trip to Europe next autumn t0 repeat some hard routes. I want to experience world-class hard routes with my new thoughts after climbing Maturity and Soul Mate.

I also want to look for new projects this summer in Japan.