Last month, after completing Don’t Call Me Dude, a bouldery 5.13c in the Virgin River Gorge, Arizona, Emily Harrington posted these words: “Don’t call me dude (cuz I’m a Slaydie, duh).” Tara Kerzhner, the filmmaker behind the recent release “Slaydies,” a paen to hard climbing by women, qualifies as well.

In January, Harrington and Kerzhner had worked the thuggy route together.

Calling it “the hardest 13c I’ve done, by quite a bit,” Kerzhner says at the time the climb seemed near insurmountable: “It took a lot of mental energy just to convince myself I had any business being on it at all.”

She did not send then, but on Monday, March 19, prevailed. In the VRG for a film project (shooting Alex Honnold and Jonathan Siegrist), she squeezed in a few days of her own climbing, and a few were enough.

The send occurred only weeks after the March 1 release date of her film “Slaydies,” done in concert with Colette McInerney and showing Margo Hayes, Paige Claassen and Emily Harrington on a trip to Spain, with hard sport climbing and deepwater soloing.

The VRG has been site of various milestones in women’s climbing; in 1996 Mia Axon became the fourth woman in the world to climb 5.14 with her ascent of Planet Earth (5.14a). This year, in the first week of February, both Michaela Kiersch and Paige Claassen sent the historic testpiece Necessary Evil (5.14c), bolted by Boone Speed in 1989 and eventually falling to a young Chris Sharma in 1997. Kiersch was the first woman to climb it, and she and Claassen made only the 17th and 18th ascents overall.

A climber of 15 years, Kerzhner, nee Tara Reynvaan, grew up in the Bend, Oregon, region, Nez Perce on her father’s side; her great grandmother was believed to be a direct descendant of Chief Looking Glass. She began shooting photos before she began climbing, and her background includes fashion work for Skunkfunk in Bilbao, Spain.

Don’t Call Me Dude is her third 5.13c, following Mon Dieu in Oliana, Spain, and, last summer, La Cabinita Especial in the Fins, Idaho. Her 8a.nu page gives a baker’s dozen of 5.13b’s (and nearly 30 5.13a’s) that include the stout La Colour de Vent in Céüse, France; The Anti Phil (“By far the most physically and mentally challenging route I’ve ever done and it’s honestly one of the greatest,” she wrote in the comments) in Rifle, Colorado; and, at the end of 2017, Slit Your Wrist and Churning in the Ozone, both at Smith Rock, Oregon. She has onsighted a handful of 5.12c’s and d’s, and come close on 13a, which remains a primary goal. Last summer she climbed the tall 7C (V9) arete Tomorrow I’ll be Gone in Rocklands, South Africa, and did three 7B+ (V8) boulders there.

Kerzhner’s filmography also features the DWS and New River Gorge celebration “Wild and Wonderful” (a re-release was dedicated to the memory of Inge Perkins, the supremely talented women’s winner, and Hayden Kennedy); “Jonathan Siegrist and the Art of Projecting: Pachamama” and “Meadowlark Lemon,” with Ethan Pringle (both for Epic TV); Colette McInerney in “Something More”; and “Last Light,” with various Smith Rock climbers. She still works as a photographer as well as a filmmaker and has several sponsorships, including from La Sportiva, which backed “Slaydies.” For the most part she travels with her husband, Greg Kerzhner, a climber and computer programmer, rarely staying anywhere longer than a month.

The 2018 visits to the VRG were her first there. “Everyone told me to try Fall of Man, 13b, or Joe Six Pack, 13a, two climbs I knew would suit my strengths—face climbing on small holds,” she tells Rock and Ice in an e-mail. “Instead I stubbornly started trying the climb that wouldn’t”—the powerful DCMD.

She continues: “Because the crux is powerful compression, you put someone like Emily Harrington or Paige Claassen on it, and they are going to crush it. They are just so strong and experienced in moves like this. All the boys crushed that move too, and most people would tend to fall several moves after the compression section.” Kerzhner, however, fell “every time” there, by the third bolt, her own clear crux. In part she felt that if she stuck the low crux, she could go to the top, but watching everyone else do the move again and again was challenging. “I wondered if I was close even.”

This round, the first time she stuck the compression, she shook herself off the climbing above. The second time, no longer unnerved, she sent.

“I was really surprised actually, and it took every bit of mental effort to convince myself I could do the rest of the climb.” She called the route her “hardest mental battle ever” on a climb.

Overall, Kerzhner describes herself as humorous, even sarcastic, and someone who “overdoes” things: “Maybe that’s what makes me kind of psycho about getting the right shots for a film, and also keeps me from just giving up when I first go up a hard route.” 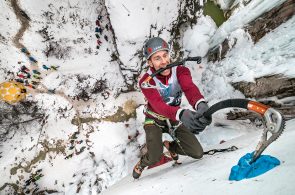