Nanga Parbat: Rescuers Save Revol, Could Not Help Mackiewicz
News +

Nanga Parbat: Rescuers Save Revol, Could Not Help Mackiewicz

In what will likely be remembered as one of the most daring Himalayan rescue operations ever, Adam Bielecki and Denis Urubko blasted up Nanga Parbat during a frigid night to rescue the stranded Elisabeth Revol. Her partner Tomek Mackiewicz could not be saved. 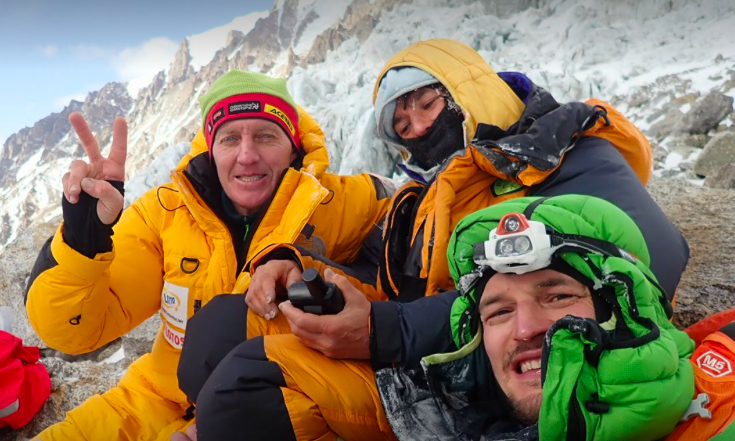 Revol between Urubko (left) and Bielecki (right) after the latter two rescued her from Nanga Parbat.

Emotions on January 28 were a mix of joy and heartbreak for all those involved with the rescue on Nanga Parbat. As the French Elisabeth Revol was whisked away to safety by her Polish rescuers Adam Bielecki and Denis Urubko, rescue organizers determined that it was not possible to reach her partner, the Polish Tomek Mackiewicz, who was still stuck above 7,000 meters.

After arriving at the base of Nanga Parbat on the evening of January 27, Urubko and Bielecki set out at a furious pace. The Polish climbers tackled the Kinshofer Wall—difficult and dangerous even at normal speeds, in daylight and when less is hanging in the balance—at superhuman speed, in darkness and -40 degree Celsius temperatures.

The rescuers found Revol in the early morning hours of January 28. Soon after, Ludovic Giambiasi, who helped organized the rescue and provided public updates on Facebook throughout the operation, wrote at approximately 2:30 am Pakistan Standard Time (PST), “Information from climbers: Urubko and Bielecki will rest 1-2 hours ( no tent) and start descending with Elisabeth. Polish [Embassy]  is organizing helicopter for tomorrow morning to take Elisabeth to Islamabad as early as weather will allow. no more information for now about plan to Tomek. Impossible for them to climb more high now – it’s already a feat what they’ve achieved. We’re working for a solution about Tomek. they all have to come back alive and they know how to measure the risks.”

The video below shows the moment when Urubko and Bielecki reached Revol in the middle of the night.

Bielecki, Urubko and Revol continued descending throughout the night and into the morning. Piotr Tomala and Jarosław Botor—two other members of the rescue team from the Polish K2 expedition—met them with medical supplies at a lower camp, where a helicopter eventually picked up all five and transported them to Skardu. From there, Revol was taken to Islamabad for further medical treatment.

Meanwhile, throughout the night it became clear that the feasibility of rescuing Tomek Mackiewicz without severely endangering the lives of other rescuers was close to nil. Helicopters on the morning of the 28th flew out in a last-ditch effort to reach him, but were unable to go higher than 6,000 meters. Giambiasi later posted on Facebook that other factors in the difficult decision to abandon rescue efforts for Mackiewicz included his “agonal state when Elisabeth left him” and an impending storm. “Those are the cruel facts,” Giambiasi wrote, before signing off, “#Tomek we love you.”

The most recent updates on the GoFundMe campaign page, which had raised over €103,000 by 9:30 pm PST on January 28, explained that “any money left after the rescue expenses will go to Tomek’s wife and his children.” The fundraiser’s organizer, Masha Gordon, wrote, “I will personally account for all money disbursed in a publicly available file.”

On Mackiewicz’s Facebook page, his wife Anna posted a message mourning his loss and thanking everyone—Revol, the rescuers, the fundraiser’s organizers and those who donated—for their support over the past several days:

I would like to express my gratitude to everyone who helped save Elisabeth Revol and did everything in their power to save my beloved husband Tom. Eli’s alive. In My indescribable pain, I’m happy she survived. She tried to help him with him as long as she could… thank you, Eli… all the measures that are collected are related to the rescue, treatment and rehabilitation of Elisabeth and the help of our [children.] Masha Gordon, thank you. Daniele. Lodovico. K2 Team, page page, embassy – Poland and French, [Adam,] Denis…. all rescue team. Robert… Stefania… page pakisanska… I’m not able to [mention] everyone… for which I’m sorry… thank you… with all my heart. Thank you for the words of comfort, the support that has kept coming to me from you… for gathering rescue measures in such a short time… thank you for your financial support.. for deposits good and love and understanding it from Tom he is good triggers And it emanates…

Not long before that, a post on Mackiewicz’s Facebook page (whether posted by his wife or another party) read, “Tom and Eli entered the top of nanga parbat.” Though no consolation, there is something beautiful in knowing that Mackiewicz did, in the end, on his seventh attempt, reach the summit of Nanga Parbat in winter.