Maximo Kausch has now climbed more 6000-meter Andean peaks than any other human on earth. The achievement comes as part of a yearlong quest to conquer all the 6000-meter peaks in South America, a feat that has never been achieved. 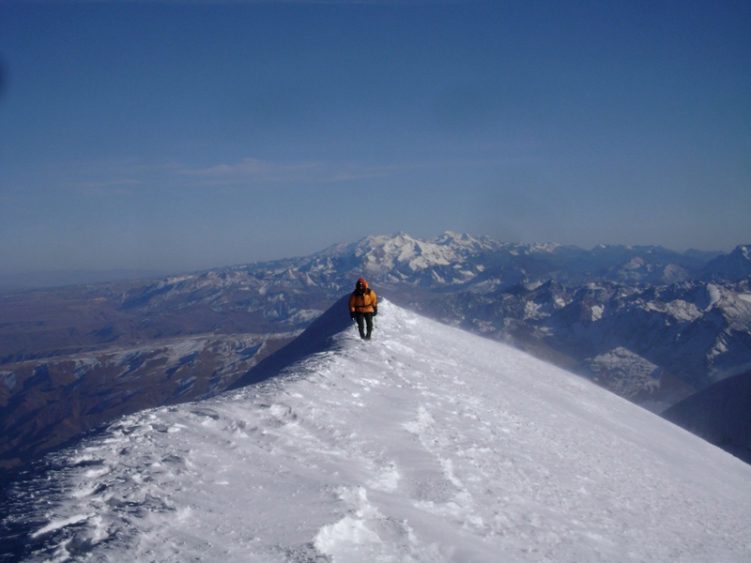 Maximo Kausch has now climbed more 6000-meter Andean peaks than any other human on earth. The achievement comes as part of a yearlong quest to conquer all the 6000-meter peaks in South America, a feat that has never been achieved.

In an exclusive interview with Rock and Ice, Kausch stated his reasons for attempting the monumental challenge:

“We know nothing about the Andes. People know Aconcagua and maybe Siula Grande from Joe Simpson’s book. Apart from these 6000ers we have 115 other peaks above 6000m that no one knows anything about,” he said. Plus, he continued, “no one has tried to climb them all!”

Other motivations include opening up the continent for future mountaineers (Kausch publishes all his routes on his Wikiloc channel) and the fact that alpine climbing in South America is incredibly cheap.

“For the cost of one 8000m Himalayan peak, one can climb at least 30 6000m peaks in the Andes … Also, down here in South America we don’t have wars, and governments aren’t shooting people next to us like is happening in China and Pakistan,” said Kausch in the interview.

Kausch climbed his 59th 6000m peak in the Andes on August 25, 2013 and established the world record for 6000m mountains climbed on the continent.

The world-class mountain guide was born in Argentina but now lives in Brazil and holds British citizenship. He leads expeditions in the Andes and the Himalayas.

Though Kausch only began the project one year ago, he spent the better part of three years just trying to locate all the 6000ers.

“Most of the South American maps use really old methods and altitudes are mostly wrong. Names also proved to be a challenge. There are cases when 4 or 5 different names are linked to the same mountain,” he told 8a.nu. “I had to download gigabytes of NASA data and work on it for months.”

Kausch used a motorbike to travel between mountains, an experience he described as “one of the greatest challenges of my trip.” In an interview with escalando.org, Kausch describes the terrible troubles he had while motoring across volcanic sand.

“I fell down five times in one kilometer and learned that I should stop biking on this type of terrain,” he said. Eventually, Kausch realized he could only drive up to 4700m before he would be forced to start climbing.

Quite a challenge, especially for a man who still intends to climb 57 more 6000m peaks, all solo. When escalando.org asked about the solitary nature of his quest, Kausch responded:

“Usually I feel very good when I am alone … A lot of the time being alone makes everything easier. [But] there are times when I get to a beautiful summit and I feel a bit sad because I have nobody to live this moment with.”

Of the peaks remaining, Kausch looks forward to the four peaks he has left in the Central Andes, near Santiago, as well as his climbs in the Blanca and Huayhuash ranges of Peru.

As the most technical and aesthetic climbing he will encounter, the Cordillera Huayhuash range will pit Kausch against Siula Grande (6260m), a peak made notorious by the film Touching the Void. Rock and Ice asked Kausch in an e-mail exchange if he was nervous about Siula and the infamous peaks of the Huayhuash, and he responded:

“Not really. My climbing mindset is pretty simple. If I get to summit a peak, great! If I don’t get to summit, great. When I’m climbing I genuinely have fun and enjoy the whole climb. So I actually look forward to the Huayhuash!”

Kausch explained, however, that the climbing isn’t always fun and games, and things can go wrong, and it’s during these times that he must concentrate on the task at hand.

“When the chips are down I just focus on that very same moment and nothing else. I try not to worry about a problem as a whole situation. So focusing on each step, the nearest rock, each ice axe placement and so on… That really helps,” said Kausch in an interview with Rock and Ice.

Prior to Kausch’s 59 summits, the man who held the record was Swiss guide Michael Siegenthaler, who climbed 57 6000m peaks in less than a year, at the age of 60.

For a complete list of Andean 6000ers courtesy of the bmc.co.uk, click here. Kausch has completed the peaks highlighted in red.