Golds for Bailey, Brosler and Buhrfeild at the 2018 Sport and Speed Open National Championships
News +

Golds for Bailey, Brosler and Buhrfeind at the 2018 Sport and Speed Open National Championships

The story of the weekend was Claire Burhfeind, who became the first American athlete ever to win gold in both sport and speed at Nationals. 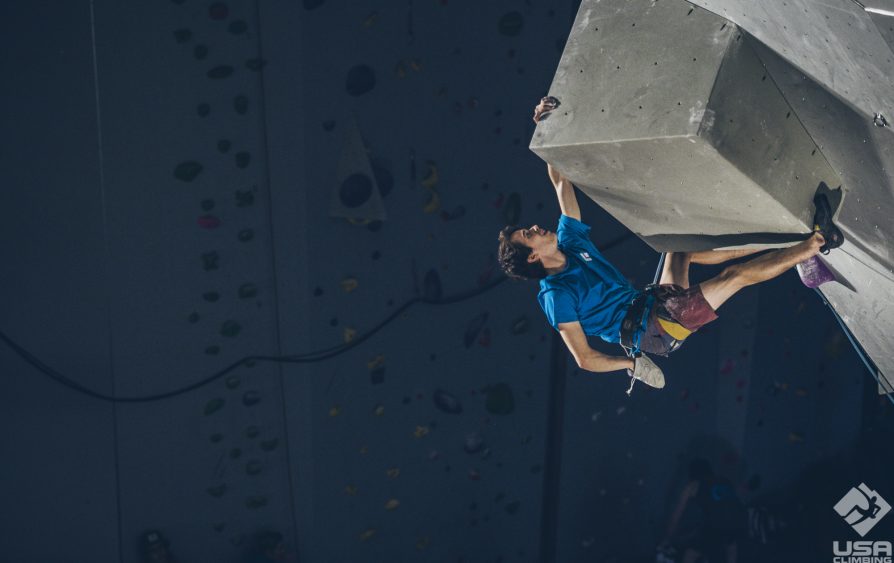 Sean Bailey moves up and around the box volume on his way to claiming gold. Photo: Greg Mionske.

The Sport National Championships are based on a three-round system consisting of qualifiers, semi-Finals and finals. Competitors have a single attempt to climb two routes in Qualifiers and one each in semi-Finals and Finals, with points being awarded for each hold reached. The top twenty qualifying athletes proceed to semi-finals from which the eight frontrunners advance to finals. In the speed discipline competitors climb the speed route twice for qualifiers. From here the top eight athletes climb the route twice more in finals.

The women’s podium was an altogether different story to that of 2017, when young guns Shiraishi, Margo Hayes and Brooke Raboutou claimed the top spots. This year Buhrfeind, who placed sixth last year, was joined by Michaela Kiersch in second and reigning National Bouldering Champion Alex Puccio in third.

Of the female finalists, Buhrfeind, Keirsch, Puccio, Hayes and Raboutou all made it through the burly mantel that guarded the chains of the finals route, meaning that the ultimate standings were determined by the count back to semi-final results. Buhrfeind’s strong performance in Semi-Finals secured her the gold. Puccio commented on her Instagram account that the final route was insufficiently hard:“Would have loved to fight it out on the finals route,” rather than the results being dictated by count backs.

The men’s final was the complete opposite with no finalists topping out. Most of them were foiled by a fierce, crimpy traverse on the latter third of the wall. Sean Bailey and Drew Ruana fell at the same point beyond the traverse, but Bailey managed to fleetingly latch the next hold before succumbing to gravity, thus earning him gold. Ruana took silver, and bronze went to Solomon Barth following count back to semi-finals after he tyed with Josh Levin and Noah Ridge on the final route.

Check out the full results here.

In the Speed event Brosler and Buhrfeind reclaimed their 2017 titles, dominating throughout the three rounds of competition. In the women’s divison Amanda Wooten placed second in Qualifiers, only to be beaten in the finals by 0.41 seconds by Piper Kelly, who had placed third in the previous round. In the men’s event the finalists stepped up in the level in the finals with five of the eight competitors climbing the route in less than seven seconds, including Jordan Fishman who took second, and Max Hammer who took third.

Check out the full results here.