From New Hampshire to Tennessee, from Kentucky to North Carolina, ice that rarely or never forms presented exciting opportunities for the locals willing to brave the temps. 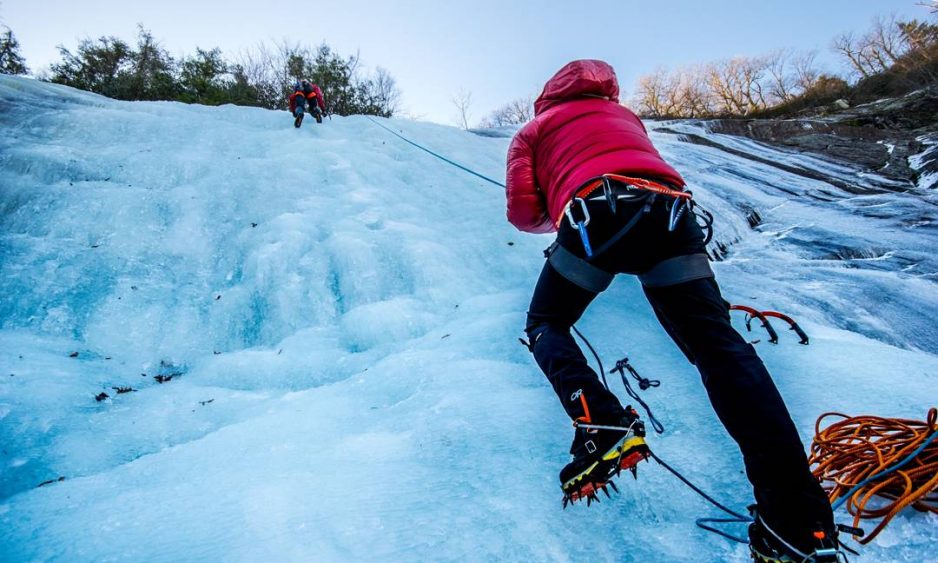 With a name seemingly plucked from the disaster film The Day After Tomorrow, the bomb cyclone wreaked havoc across the East Coast over the past week. Flood waters filled the streets in Boston and then froze in the arctic temps; massive waves scoured the Massachusetts coastline; heck, iguanas paralyzed by the cold even started falling out of the trees in Florida.

For all the madness, though, the bomb cyclone worked wonders for East Coast ice climbing. Climbs that freeze not once a decade formed up virtually overnight in the Northeast, and further south climbs that have never formed were suddenly in—and fat, at that.

At Whitehorse Ledge, in North Conway, New Hampshire, the ephemeral Myth of Sisyphus (WI 5) came in. Local ice climber Zac St. Jules said the climb is “very rare,” and reported that a few industrious individuals went out and climbed it sometime in the last two days before it inevitably disappears. St. Jules also said rare climbs like the Painted Wall Icicle (WI 5+ M9) and other drips on Cathedral Ledge’s Barber Wall have come in over the past week.

Moving further south and inland, Kentucky also reaped the bomb cyclone’s bizzare benefits. Erik Kloeker, a guide with Kentucky Rock and Adventure Guides, told Rock and Ice about some of the climbs that he and others swung their way up in the Red River Gorge, including Copperas Creek Falls, which froze into a beautiful pillar reminiscent of a mini Fang. “It only freezes a couple times a decade into a magnificent 45-foot pillar,” Kloeker said. “First free ascent this year by Heath Rowland, Mike Wilkinson, Geoff Ris and others.”

Down in the Red, Kloeker and others also climbed the 100-foot, three-tiered Horseshoe Falls, and the 70-foot smear Crushed Testicle Hands. Kloeker climbed the latter with Kentucky ice aficionado Clifton Gifford. The climb’s name comes from “Clifton forgetting his gloves and getting the worst case of the screaming barfies he’s ever had which he likened to the pain of ‘that time I had to go to the hospital for a crushed testicle.’”

“It’s too bad we only had a week to climb everything,” Kloeker said, “as we only tapped a small bit of the potential here.”

Moving even further south, Chattanooga, Tennessee had enough consistent cold for some unheard of ice. Allison Hughes told Rock and Ice that she and friends found some ice off of Skyuka Trail and threw a rope on it this past Sunday. “We haven’t found anything on this being an [established] route,” she says, “just a great find.”

Finally, North Carolinians got in on the frigid fun out in Asheville. Alex O’Neill told Rock and Ice, “We had some solid WI 2 and WI 3 ice here,”—and the pictures attest to it: the rolling ramps of blue look like hero ice all the way.

As the bomb cyclone’s anomalous conditions dissipate, so will most of this fleeting ice, if it hasn’t already. So while the warmer temps are likely welcomed by all, don’t forget to take advantage of conditions, be it on rock, ice or anything else, when they present themselves—for tomorrow they might be gone!